Every family system is unique and one of the major contributing factors that determine that is birth order. There have been studies that have been conducted that suggest that your identity, character and personality can be swayed by the order you were born. In the 1989 movie Parenthood, the complexity, culture, gender issues and constant changing of family is examined. This essay will take a deeper look at two family systems from Parenthood and determine their ‘typical’ and ‘untypical’ birth order behaviors.

Don't use plagiarized sources.
Get Your Custom Essay on Parenthood: Psychology and Birth Order Just from $13,9/Page

Gil and Karen Buckman have raised their three kids in such a way that they all exhibit ‘typical’ birth order behavior.

Kevin is the oldest and strives for perfection through academics and athletics; this is one of the main characteristics of being a first born. In school Kevin’s teacher informs Mr. and Mrs. Buckman that Kevin has emotional problems and too many worries for his age and suggests that a Special Ed program. The Buckman’s do not feel the need to put him into special classes, and will have him start seeing a therapist; this is because they feel he is a direct reflection on them.

Kevin also plays baseball, and during the games demonstrates fear of failing.

Parents often look at the first born as a second parent and this can be related back to Kevin when he says, “I have to do everything…” At the end of the film Kevin also tells his father that he wants to be just like him when he grows up; this is no surprise because Gil (also a first born) is a business executive and first borns like law, order and definite boundaries. ‘Typical’ first borns have high expectations for themselves (Kevin shows this in baseball, always beating himself up) and strive to live up to their parents expectations.

Taylor is the middle child of Gil and Karen and is not shown in the movie as much as her two brothers. Middle children tend to crave attention and there in a scene in the movie where Taylor gets in trouble at school for kissing too many boys, and by doing this she will get attention from her parents. Middle children also are called ‘the forgotten child’ and in the film it seemed like the director intentionally put more emphasis Kevin and Justin rather then Taylor. At the beginning of the film Justin was the youngest child of Gil and Karen, and functioned like a ‘typical’ baby.

At Kevin’s birthday party and other family events, Justin was always doing funny tricks and creating laughter among the guests. At the end of the movie, Gil and Karen had just had another baby, so as the viewer we do not know what role Justin will develop into. Gil and Karen have a ‘typical’ birth order family and that could be due to a number of contributing factors. Gil’s family growing up could be characterized as a ‘typical’ birth order family, so when he was raising his kids he could have used the same parenting techniques his parents did.

The kids’ roles could also be determined by the number of years that is between all of them, there are always exceptions to the system. Helen Buckman and her ex-husband Ed raised their two kids in a way that they exhibit ‘untypical’ birth order behavior. Julie is a first born, like Kevin, but tends to act more like a middle child with her rebellious, free spirited behavior. Whether it is shaving her head, running away or getting married she is always trying to get attention out of her mom somehow. Julie does not embody the ‘typical’ first born mentality, she is not goal orientated, a high achiever or afraid of failure.

Gary is the baby but is missing one of the key personality traits, entertainment. Gary can be seen as a ‘typical’ baby because he is rebellious, temperamental, and ambivalent. His rebellion can be seen when he locks his room and doesn’t let his mom know what is in his paper bag, this is probably because he is having emotional problems due to his parents divorce and does not know how to handle it. He is temperamental and ambivalent because he does what he wants, when he wants to and doesn’t seem to care.

Helen, Julie, and Gary’s family dynamic could be ‘untypical’ because of the recent divorce their family went through. The person watching the movie does not know what the family was like before this event, but the kids’ attitudes could have potentially changed. Families are all different, and that is what makes them all different. Since this year I never even knew such studies existed. Learning about birth order studies has made me think about my own family, and whether we are ‘typical’ or ‘untypical’, but I know that there are always exceptions. 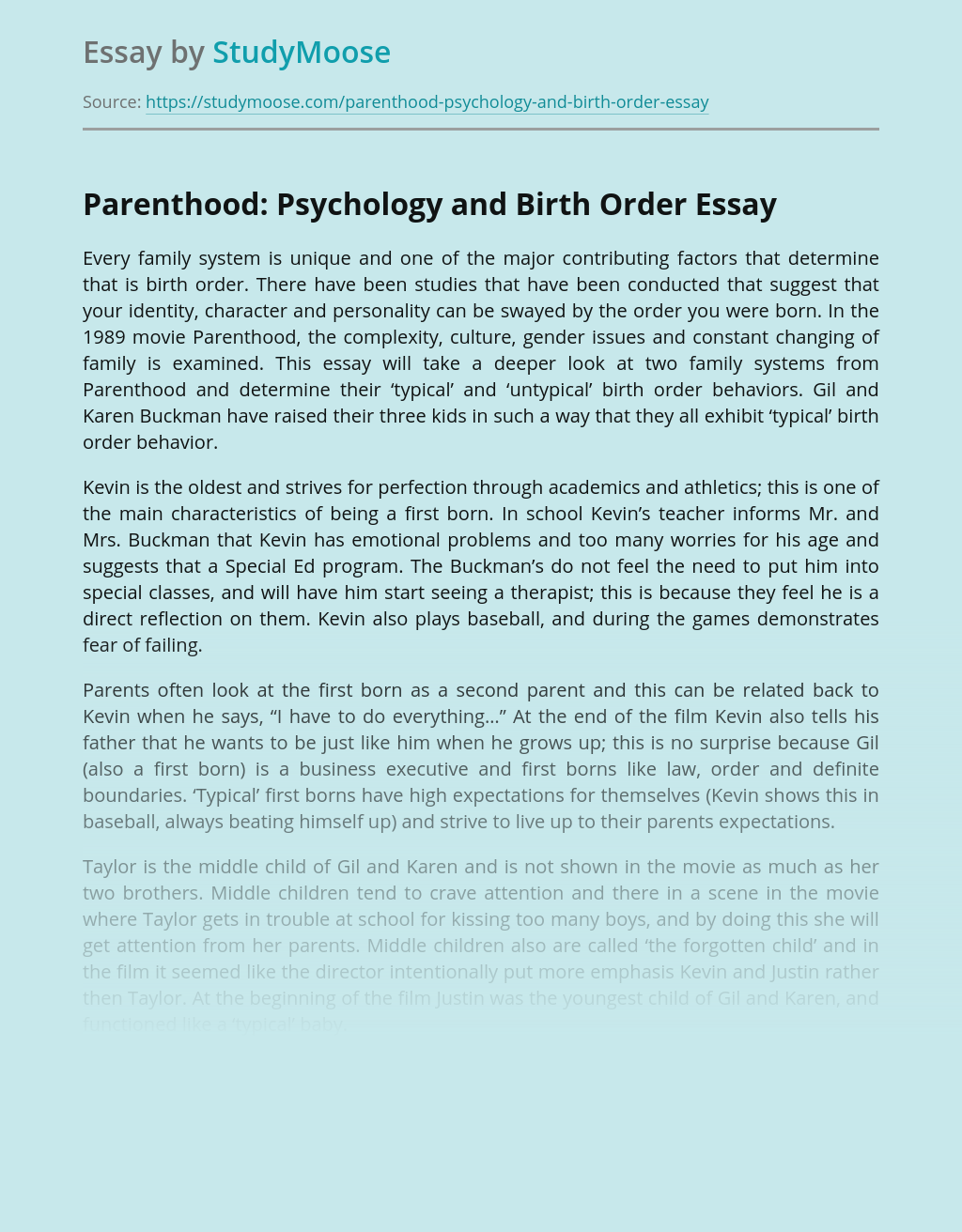 A Particular Friend or Family Member

If I need to choose one of my family members, I may prefer to write about my superhero in my life that is my beloved father. Actually in my mind, I had three persons that always be my superheroes in my life. They are my elder sister that I call ‘Along’, my beloved mother and...

There is about a six week to six month period right after a child is born where forming a bond with your child is quite significant. This period of time will help the child with setting a certain healthy routine, getting the house set for the child, and adjusting to the new life in the...

﻿The Era for Stay-at-home Dads

For generations, the gender role stereotype within the family has been the same: the father is a deserved pillar of family, and he has responsibility to be a breadwinner by going out to work to make money rather than staying at home as a homemaker. However, over the past few decades, the conventional gender role...

As human beings we need to socialise and communicate with others. Of all the relations that we have in life, the most precious and strong are the ones with our families. Many a times during adversities when the closest of friends may leave us, our families – parents, siblings, spouses, children etc. are those who...