By and large, poor nations have much higher birth rates than wealthy nations. The unfortunately reality of this is that now these poor nations have even more mouths to feed. These countries already struggle to feed, clothe, and shelter their population, the last thing they need is for that population to exponentially grow, creating more human beings to feed, clothe, and shelter.

Turn in your highest-quality paper
Get a qualified writer to help you with
“ Six Factors that Influence Birth Rates in Poor Countries ”
Get high-quality paper
NEW! AI matching with writers

This phenomenon tends to lead to a cycle of poverty.

The most prominent factor influencing birth rates is the lack of effective means of birth control. This is actually a two-pronged factor based on lack of education and the lack of money to purchase birth control. First, poor countries have less time and money to invest in education of any sort. Generally, in low income countries, by the time that a child hits adolescence, they are no longer in school at all.

Poverty forces children to go out and work at a very young age.

These young workers are a very important part of the family’s income. Therefore, they cannot attend school. This will result in little or no sexual education for citizens in these poor countries. Therefore, they do not understand proper method of birth control. Thus, higher birth rates are certain.

The second factor addresses the monetary issue—there is no money for birth control in poor nations.

Citizens in these poor nations are doing all that they can to put food on their plate and a roof over their head. There is very little or no disposable income left over to purchase condoms or diaphragms or birth control pills or morning after pills.

Without this proper means of birth control, higher birthrates will naturally result. Now, a third factor which coincides with birth control is based on the social and religious acceptance of modern birth control methods. For example, in the U.S., the Catholic Church has taken a stance against birth control. This has led to larger families for those who are devout, practicing Catholics. In much the same way, if a poor nation feels birth control is against their religious beliefs, they will see their birth rates continue to rise unabated.

A fourth factor affecting birth control is female literacy rates. Females who are literate are more likely to be in the workforce. Those who are illiterate are more likely to remain home and work as a homemaker. Obviously, if you are working, you are less inclined to have a large number of children. But, a low percentage of the female population in poor nations is literate. This translates into higher birth rates. Also, a fifth factor, particularly impacting poor nations, is a high infant mortality rate.

When parents in poor nations have a child, they realize that there is no certainty that the child will live. Therefore, they are more likely to produce higher numbers of kids in hopes that some will survive. So, again you will have a higher birth rate. Finally, a sixth factor would be the typical age of marriage. The United States which has a high average age of marriage has a very low birth rate. But, in poor nations where the average age of marriage is very low, sometimes even down in the teens, you will see much high birth rates. This simply a result of people, once married, naturally proceeding to have offspring.

Unfortunately, these factors do not give much optimism to poor nations. Despite their best efforts, it is extremely difficult for a poor nation to control its birth rate. Where these nations stand right now, they can do little to salvage their economies and become wealthy, when parents are consistently having kids which they cannot afford. However, if the nations could compel their citizens to use modern birth control methods, these nations could see a turn around in their birth rate numbers. The key is that birth control becomes affordable for these nations citizens. 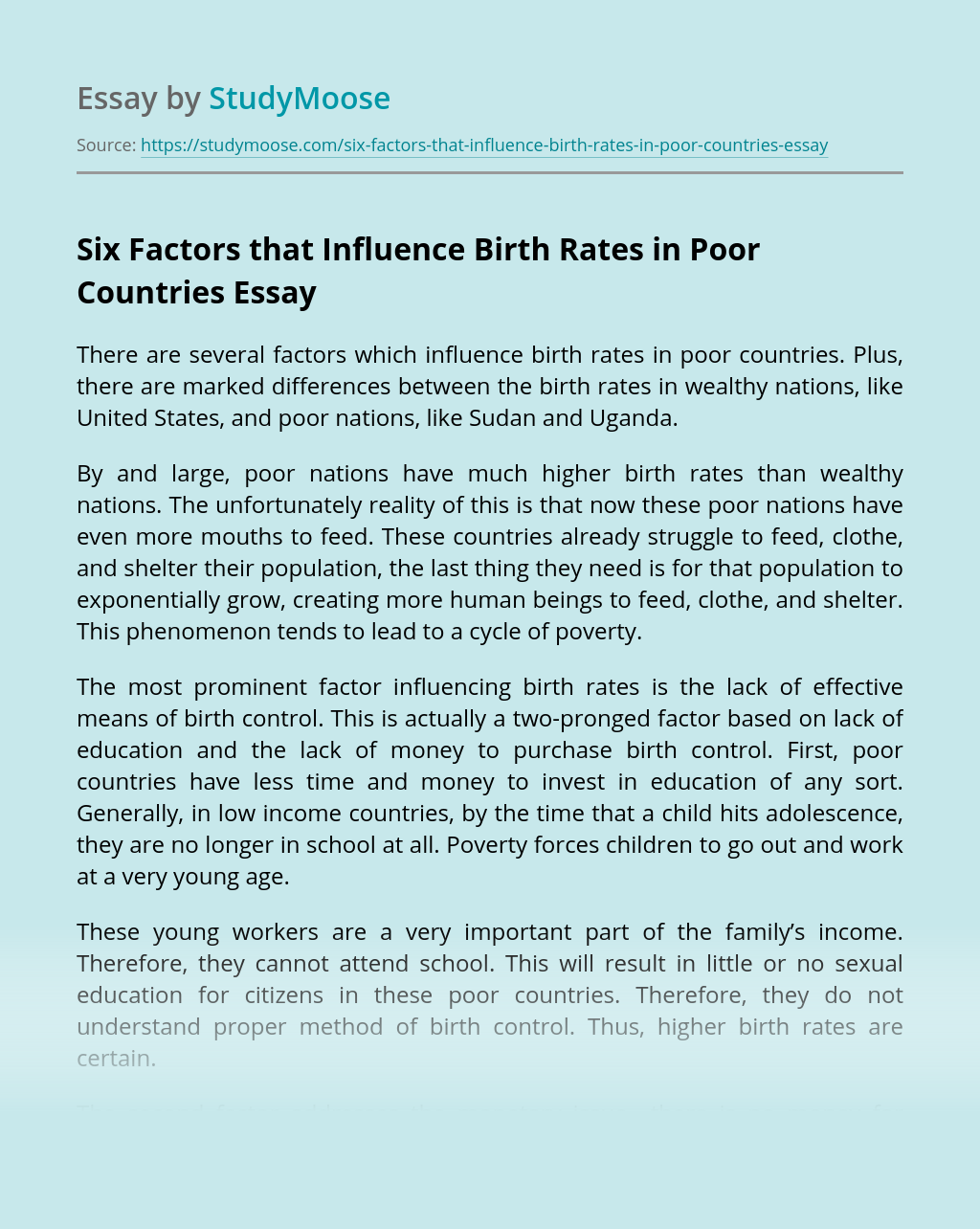 Turn in your highest-quality paper
Get a qualified writer to help you with
“ Six Factors that Influence Birth Rates in Poor Countries ”
Get high-quality paper
Helping students since 2015
Stay Safe, Stay Original