The ruler, commander, leader, “God like” image to all of German in between his rising years, 1928-1935, had great power over all living being in Germany at the time. German flags would be raised wherever you may travel in German; Nazi’s over-ruled the people in many streets… Here is a poster of Adolf Hitler, during 1935, showing us how mighty and powerful he is. Showing us how he can change German individuals’ lives into a better life, and how he and his party, can make a change into German.

Es lebe Deutfchland! ” A phrase that has been used in front of the poster, meaning “Long live Germany! ” We all know that Hitler’s rise to power between 1928-1933 made him a strong and well-known man. Everyone in Germany would look up to Hitler, and here shows how Hitler would die for his country, how he would do what so ever to protect his country. He is telling us in this poster that he himself would fight for Germany, he would be able to lead his country, and the people in it, and keep them from harm.

Having an eagle hover against the light of heaven over Hitler in this poster connects back to Christ when a dove descended upon Him when He was being baptised by John the Baptist. This would give us a clue that Yes! Hitler was an idealized God to the Germans’, knowing that he has done a lot for them. Overcoming the great depression, helping the citizens of Germany get employed and many other offers.

People would praise in Adolf Hitler’s name. They would die for Hitler.

As you can see at the back of Hitler are his followers, much likely to be the Nazi’s and German people holding the German flag and hailing Hitler. Thousands, let’s say billions had gathered to support Hitler, and trying to persuade us that Hitler is a trustworthy man, and how he can help German citizens overcome anything when they are in deep crisis. We all know that in Hitler’s time, everyone idolized him, but for what reason? Hitler was a powerful and spellbinding speaker who attracted a wide following of Germans who were desperate for change in Germany.

This poster tells us more of how Hitler won over, changed Germany and became successful in many things. To conclude this Visual essay, Hitler was successful in his days, knowing by the looks of this poster. He did have everybody fooled by his beauty and the way he structures himself, to make people think he is on their side, but in reality he’s just another beast getting revenge for his mother country, Germany. “Heil Hitler” they say, and have German flags flowing for him… “Heil Hitler! ” 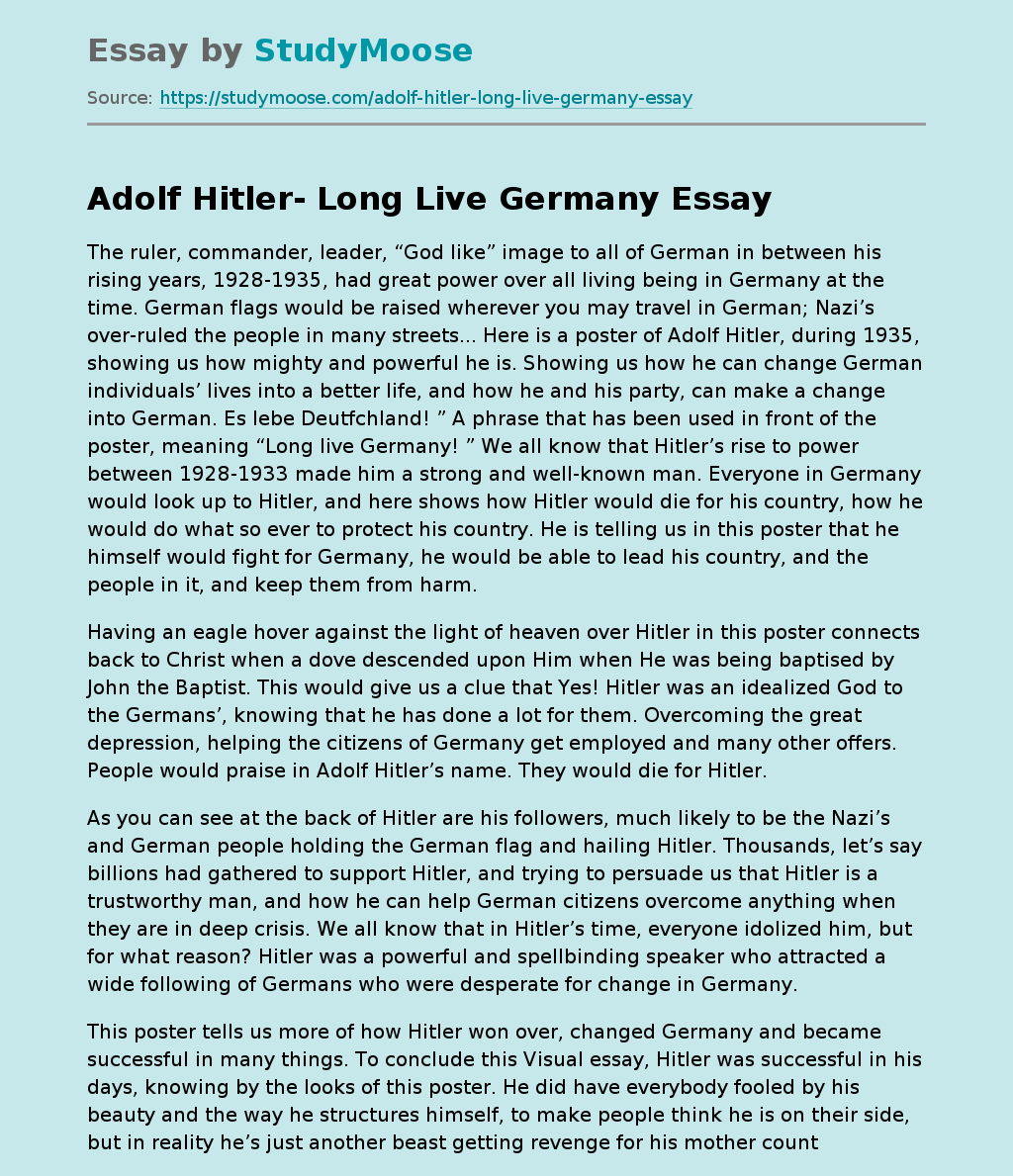