Adolf Hitler’s February 10, 1933, rhetorical speech that was able to manipulate a whole nation of individuals in the wake of a deep depression. His persuasive words resonated with the German’s and almost lead to the extermination of the Jewish race. With the aide of strategically used pathos, ethos and logos Adolf Hitler were able to accomplish what he set out to do, be the savior and guiding light to the country he loved, he lived and he ultimately died for.

Don't use plagiarized sources. Get your custom essay on
“ Speech Analysis – Adolf Hitler: Proclamation to the German Nation ”
Get custom paper
NEW! smart matching with writer

Proclamation to the German Nation

On February 10, 1933, the people of Berlin a country desperate for a way out of an economic downfall that had torn the country apart patiently waited for their newly appointed chancellor, Adolf Hitler, to address the nation. His presence and demeanor were one of confidence and intellect, his charisma bountiful and endearing. The words he chose were articulate and exactly what millions of desperate citizens needed to hear at that precise moment, Hitler was going to make changes for the better of the country and its people.

Hitler made it clear that he was Germany’s only chance to once again become a proud and powerful nation like it once was, he was their savior.

Didn’t really matter the social status, Hitler had an agenda in mind he wanted to push, and both audiences were ready to accept the leadership at any cost if it meant a brighter future. Hitler knew the people were desperate for salvation from any influential individual who could promise to accomplish such tasks. Hitler spoke proudly of his country and how he was willing to fight for his people and his nation to once again rise to greatness.

The German people had nowhere else to turn and were under a deep depression when Hitler stood before them as the perfect opportunity for a way out. His effective and persuasive methods of using pathos in his speech echoed in the hearts of the German audience. Hitler’s use of keywords stirred emotion and caused a positive uproar from a once fallen nation established his position as one with the people. Phrases such as our fight, we must come together and rebuild this community ourselves. Hitler’s play on words gave the people what they had been longing for a strong confident leader that stood beside them in their time of need and gave them hope that they would one day restore what was lost.

Hitler’s brilliant and memorable speech used several strategies to ensure his position in power. Not only did he use pathos to entice his people’s emotions, but he also included ethos by allowing his close associate Joseph Goebbels to introduce him. Goebbels started his speech by stating how the newspaper called him a liar and commented on his underhanded political ways. He did this to make sure the people saw the ethical appeal in Hitler and that he was a man of integrity, credibility, and perseverance, unlike past predecessors. Hitler further established ethos by commenting on his values and swear by the Almighty God that he would do everything in his power to make his people proud.

He made sure to use logos in his speech to establish reasoning with his audience. The German people felt that Hitler truly understood and saw firsthand their struggle. Once he had established this credibility with the audience it was easy to get them to focus on one common enemy, an entity to blame for all the problems the German people faced. By focusing the spotlight on a specific goal gave the audience a sense of hope and a future to look forward too because their new leader was going to make a change for the better.

Moreover, it is now easier to see and understand how the manipulation of words and the persuasiveness of speech delivery can change people’s way of thinking, but to be able to convince a whole nation of your power, importance, and vision is truly jaw-dropping. There are many important factors and techniques that are used to make an impactful and lasting impression on an audience and Adolf Hitler used them to his advantage. When delivering his speech, Hitler was able to connect with everyone in the crowd and make them feel that they can make a change for the better. That by uniting as one they could, together, once again make Germany great again. The confidence that Hitler instilled in his people with just his way of words is truly inspiring. He was successful with his agenda and in persuading his people that he was their trustworthy savior willing to put it all on the line for the sake of his beloved country and people. The rest is history. 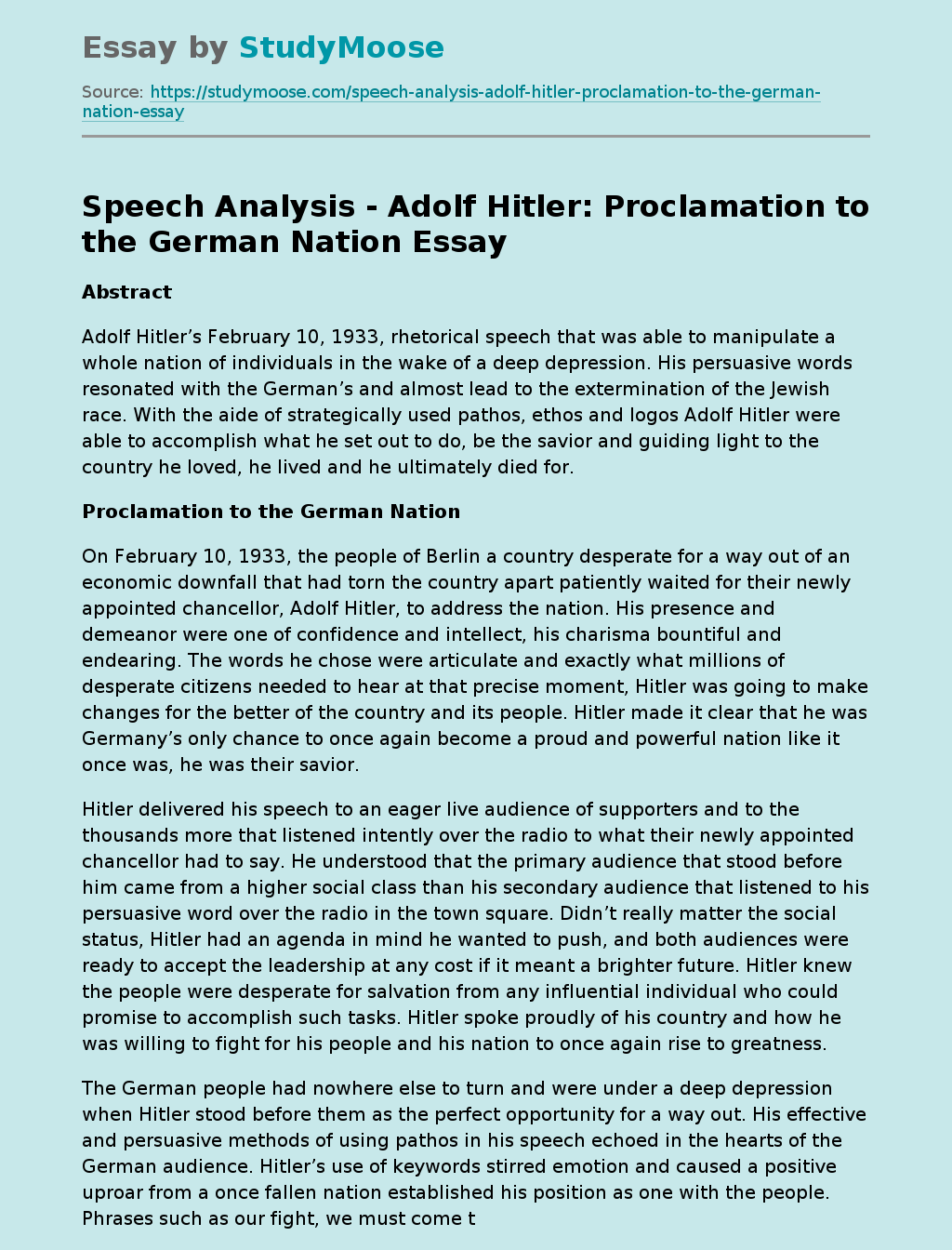