Hitler’s appointment as chancellor on January 30, 1933, marked a crucial turning point for Germany and, ultimately, the world. His plan, embraced by much of the German population, was to do away with politics and make Germany a powerful, unified one-party state. Over the course of this essay I will examine the significant causes and consequences of Hitler becoming Chancellor of Germany.

A significant cause of Hitler’s appointment as chancellor was when he led the Munich (Beerhall) Putsch, where he took control of the event and tried to start a revolution against the Bavarian Government.

The revolution failed, and Hitler was put on trial for treason. During Hitler’s trial he gave a moving speech and, due to its reception it became clear to him that he had enough support to gain power legally and democratically. He was sentenced to a mere 5 years but freed after 9 months, when any other person would receive the death sentence for the same crimes. Hitler used his short time in prison wisely, writing a book, titled ‘Mein Kampf’ (my struggles) that outlined the process by which Hitler became antisemitic and described his political ideology and future plans for Germany.

Over 10 million copies of Mein Kampf were sold, and the book only made him more popular.

The armistice was an agreement signed by politicians across nations to end world war one, largely negotiated by nations France Great Britainand USA. The allies demanded that germany sign the armistice within 72 hours and their efforts to negotiate failed. Matthais Erzberger and other German politicians signed the surrender at 5am and 6 hours later, the war was over. These politicians were later said to have ‘stabbed Germany in the back’ and branded ‘The November criminals’. The Treaty of Versailles was signed on June 28th 1919, and was seen as yet another stab in the back to the German people as they believed they had not gotten a fair deal from this treaty as the terms were viewed as too harsh (these terms included loss of land, army reduced to 100,000 no air force allowed, navy reduced, no submarines, Alsace and Lorraine returned to france, saar basin under international control, lost all colonies, accept responsibility – war guilt clause 231)Both of these events are causes of Hitler becoming Chancellor as they sparked the rise of nationalism and the public thinking they needed a more extreme option.

Versailles had stripped Germany of 13 percent of its territory, 15 percent of its farmlands, a quarter of its coal mines and three-quarters of its iron production. Another long term cause of Hitler’s appointment as chancellor was his oratory, personality and leadership skills. Hitler was one of the best public speakers of his time, sharing his message with millions around the country. He had an amazing method of building suspense and anticipation when he spoke by keeping crowds waiting for him to arrive, then remaining silent on stage, before speaking. When he started to speak, he would do so quietly before building up to bringing up his nationalist views and other more extreme ideas. The fact that his rallies included militaristic music, uniforms and banners helped to ensure that his nationalist ideals were apparent. Hitler’s personality is an important long term cause of his rise to power as it allowed him to gain such a large following and achieve power legally.

One of the most important short term causes of Hitler’s appointment as chancellor was the Great Depression in Germany, sparked by the stock market crash on 24 October 1929 29 October 1929. During the Great Depression, unemployment rates had reached an all time high in 1933 with 6 million germans out of work and general poverty was also a huge problem. Both of these problem caused people to look to more radical options like Hitler and the Nazi party. Since the first world war, Germany had been called on to pay reparations to the allied forces as a part of the Treaty of Versailles (33 billion USD). Rather than tax the struggling German people, Germany had borrowed large sums of money from America, so when the stock market crashed, America wanted their loans repaid early, so they could boost their struggling economy. This led to a disaster in Germany. Banks failed and unemployment rates rose, creating a perfect atmosphere for Hitler, who blamed jews for the depression, to rise to power. The Great Depression created an angry, frustrated german people, who were more open to ‘extreme’ political systems like fascism and communism. The fear and uncertainty many germans held also helped to create an environment where Hitler could gain support.

Another direct result of hitler becoming chancellor Was the implementation of his racial policies into action. Hitler believed in a far superior Aryan race coming from a warped sense of social Darwinism. Because of the myths of ‘dolchdoss’- that the Jews and communists were responsible for the end and loss of ww1- and the Jewish conspiracy that the Jews and Slavs were diluting the aryan bloodline through intermarriage, Hitler had a deep set hatred for Jews and other inferior races. First step he took came in 1933 with the sterilisation law. In the same year, the purchase of Jewish and practising and Jewish professionals were banned.In 1935, the star of David was a symbol of those of Jewish lineage were forced to wear, as the Nuremberg laws took effect. During World War II jews, Slavs , disabled people, homosexuals and more were sent to concentration camps, which resulted in the slaughter of an estimated 21 million people, 6 million of whom were Jews.

A direct consequence of Hitler becoming Chancellor was the rapid nazification of the German state. Through the excellent work Of his puppet goebbels, Hitler was able to saturate the German people, mainly in the categories of family, religion, and education. During the Nazi rule, goebells effectively put German culture and a Nazi straitjacket as the press, literature publications, art and music became a domain of government. Revolving around the Fuhrerprincep, hitler’s word was law and while it was easy to indoctrinate younger and more impressionable generations in Germany, the adults were a different story as they were not easily persuaded by the spoonful of lies they will be. Even at the Nazi party gained popularity, over 50% if people still opposed them. When it came to the adults, a tactic of intimidation was perused. This tactic was led by Himmler, who was the figurehead of justice and police. He had the SS and gestapo under his command. During the Nazi rally, suspicion was prevalent, and spying was encouraged. 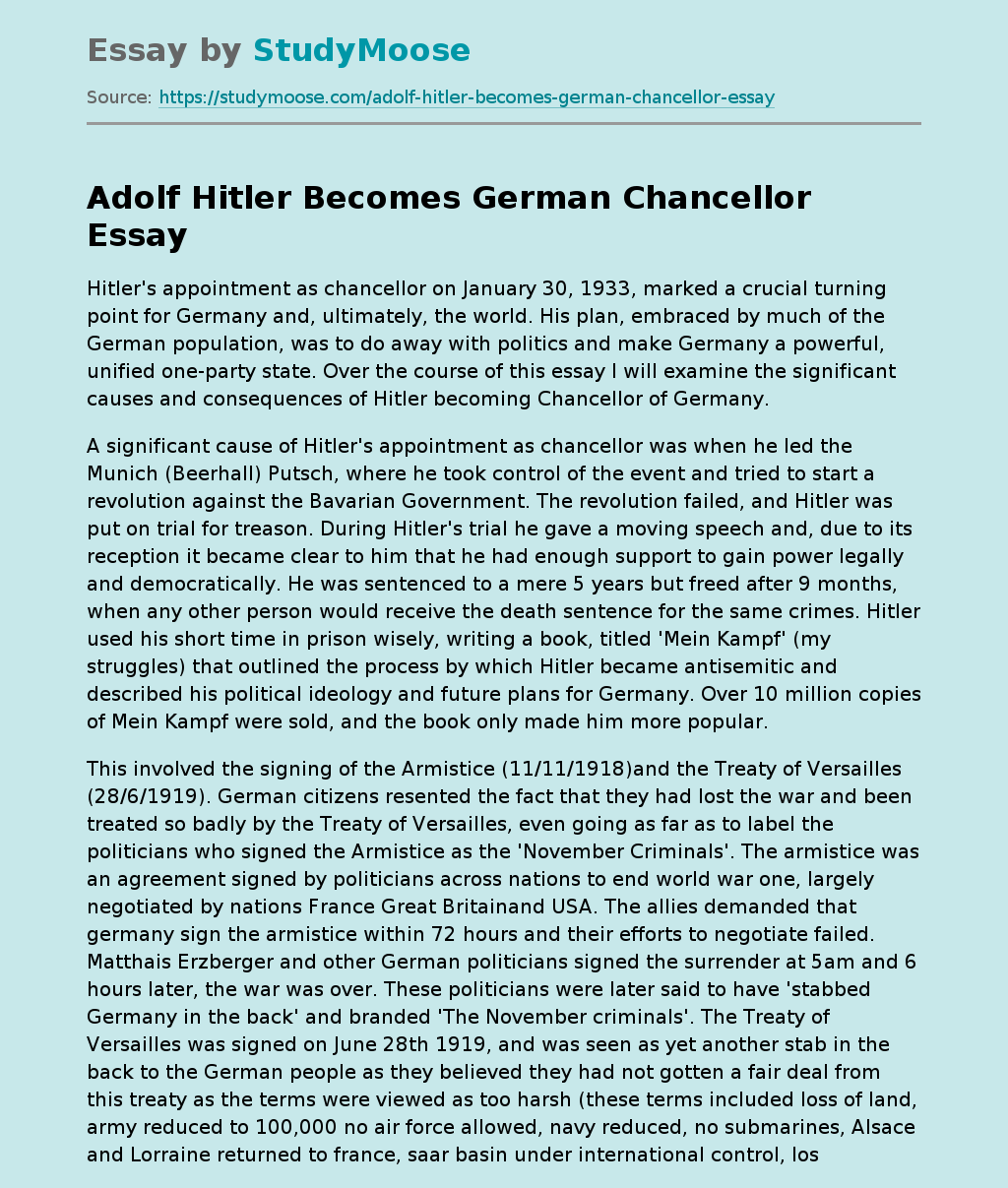