Is it true that Adolf Hitler is the son of Rizal

This is absolutely absurd, but since some fairly educated people actually want to believe it, I write this column. The argument is that Rizal had a German connection, he studied in Heidelberg and being the Pinoy Don Juan he probably sired a son (why not a daughter?) who later turned out to be Adolf Hitler. Hitler was born in 1889, and Rizal left Germany in 1887. Unless Hitler was a delayed baby, that is highly improbable.

Although there is no resemblance between the two, it is argued that, unlike the tall, blond, and blue-eyed Germans, whom Hitler wanted to propagate into the ‘master race,’ Hitler himself was small in stature and had dark hair and dark eyes.

Don't use plagiarized sources. Get your custom essay on
“ Is it true that Adolf Hitler is the son of Rizal ”
Get custom paper
NEW! smart matching with writer

I would counter this argument by explaining that, contrary to popular belief, Hitler was an Austrian not a German.

But then Rizal visited Austria in May 1887 and according to Rizal’s traveling companion, Max Viola, he did spend a night with an unknown Austrian woman. Viola remembers that they were billeted in the Hotel Metropole, Vienna and Rizal “…encountered the figure of a temptress in the form of Viennese woman, of the family of the Camelliasor Margarite of extraordinary beauty and irresistible attraction, who seemingly had been expressly invited to offer for a moment the cup of mundane pleasure to the apostle of the Philippine freedom who until then had enjoyed among his intimates the fame worthy of his glorious namesake, St.

Joseph. With the exception of this case, I knew of no other slip of Rizal during more than six months of our living together.

Is it true that Adolf Hitler is the son of Rizal. (2016, Dec 16). Retrieved from http://studymoose.com/re-is-it-true-that-adolf-hitler-is-the-son-of-rizal-essay 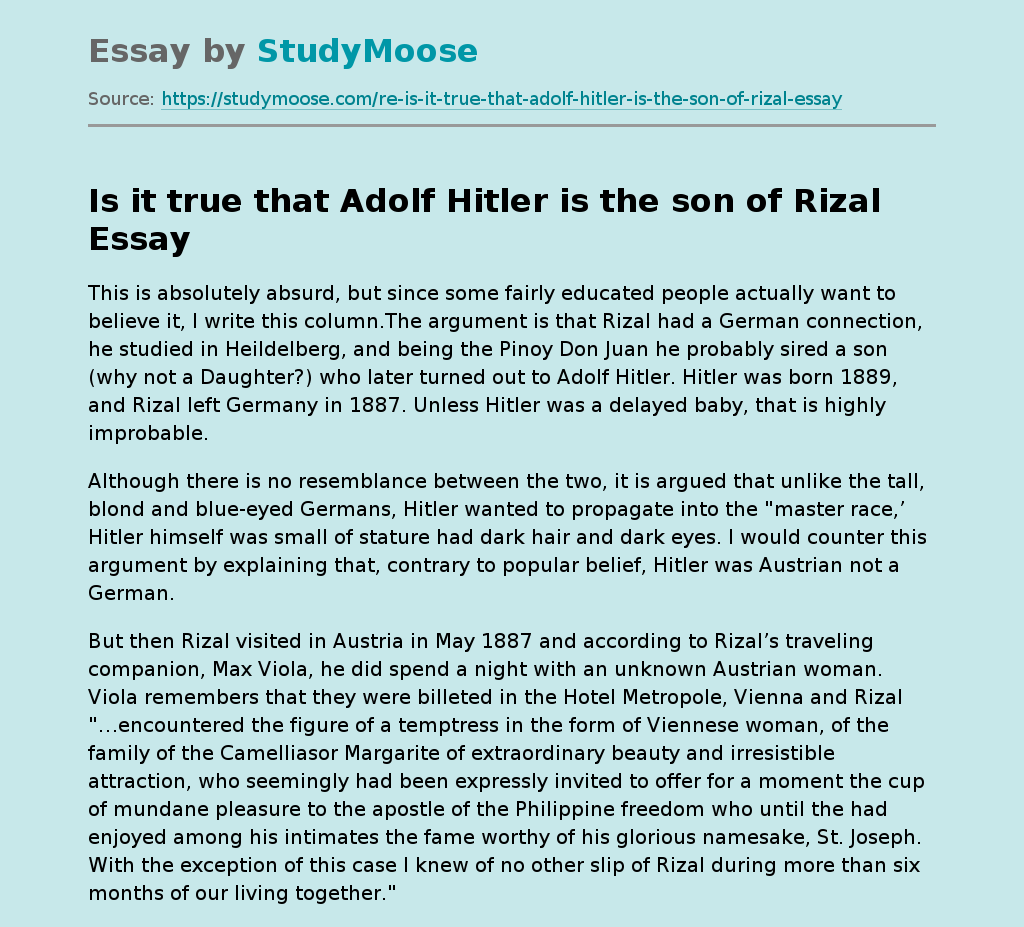