To support the life of an ailing individual and to relieve pain, the application of formal and conventional medical practice is not alone that can help. The application of complementary and alternative medicine may also relieve the patient of such sufferings. The National Center for Complementary and Alternative Medicine (NCCAM), National Institutes of Health has defined complementary and alternative medicine as “a group of diverse health care and medical systems, practices and products that are not presently considered to be part of the conventional medicine” (House Select, 2006 p.

Don't use plagiarized sources. Get your custom essay on
“ Acupuncture: An Alternative ”
Get custom paper
NEW! smart matching with writer

There is a distinction between the complementary medicine alone and alternative medicine alone. Complementary medicine is applied jointly with the conventional medicine such as the use of aromatherapy in reducing the patient’s pain after undergoing a surgery while alternative medicine is applied as a substitute for conventional medicine such as the use of special diet to treat cancer instead of following the physician’s recommendation to undergo surgery or chemotherapy.

According to NCCAM, Acupuncture is an “energy medicine involving putative energy fields”, or the biofields. (Energy Medicine, 2004)

What is Acupuncture, Its Philosophies, Purpose, and Treatment Principles?

“Acupuncture can alleviate prolonged pain, discomfort, and anxiety, and end severe dependence on a medical system so huge and impersonal that each patient feels like a forgotten cog in a machine.” (Cargill, 1994, p. 3) That is what Acupuncture can do according to Cargill. But what is it? NCCAM defines Acupuncture as “a family of procedures involving the stimulation of anatomical points on the body using a variety of techniques, the most common of which is the penetration in the skin with thin, solid, metallic needles that are either manipulated by the hands or by some electrical stimulation”. (An Introduction)

The philosophical basis behind Acupuncture for traditional practitioners is the “qi” (Birch & Felt, 1999, p. 88) or the so called vital energy. Qi flows through the twelve major energy pathways called meridians, each of these is connected to specific internal organs of the body or organ systems and “three hundred sixty-five to two thousand acupoints” (Freeman & Lawlis, 2001, p. 311). This qi is blocked when there is imbalance of yin and yang, “two opposing and inseparable forces”(An Introduction), in the body thereby causing illnesses.

Acupuncture can relieve the ailment by unblocking the qi through the insertion of needles at specific anatomic points in the body. Simply stated, the purpose of Acupuncture is to heal or therapeutic. Some healing results of acupuncture, according to research, include alleviation of low back pain, headache, pain from osteoarthritis, neck pain, musculoskeletal and myofascial pain, organic pain, and pain before and after surgery. It has also been used for the treatment of postoperative and chemotherapy-induced nausea, neurologic dysfunction, gynecologic and obstetric conditions, asthma, and substance abuse. With Acupuncture, illness or sickness is prevented while better health is restored.

Brief Summary and Evolution of Acupuncture

Acupuncture evolved from the traditional Chinese medicine (TCM). Earliest evidence regarding this practice can be found in the text, “The Yellow Emperor’s Inner Classic (Huang Di Nei Jing), a collection of 81 treatises compiled between 206 BC and 220 AD” (Freeman ; Lawlis, 2001, p. 316) However, Freeman and Lawlis further noted that “the oldest surviving classical text dedicated entirely to acupuncture was written sometime in 282 AD by Huang-Fu Mi” entitled, The Comprehensive Manual of Acupuncture and Moxibustion (Zhen Jiu Jia Yi Jing).

This book contains the “combined classical concepts concerning the theories and teachings of acupuncture points, channels, and the cause of illness, diagnosis, and therapeutic needling” (Freeman ; Lawlis, 2001, p. 316) It was in 618 AD when the practice reached its peak in China with the foundation of the Imperial Medical College. During this period, the practice was spreading its influence over other Asian nations such as Japan, Korea and Southeast Asia. Acupuncture attained maximum refinements at the end of the sixteenth century.

Although it was in 1971 when Acupuncture became popularly recognized in the United States of America (USA), awareness about this therapeutic practice has been introduced in the country long before this period. The first records and studies of the practice became known to the Americans in 1825 in the publication of Morand’s Memoir on Acupuncturation, a document translated from French by Franklin Bache. However, it was in 1971 when the New York Times correspondent James Reston note down his experience about Acupuncture describing how medical professionals in China utilized needles to alleviate his pain after he have undergone surgery.

Currently, the NCCAM reported that in the USA Acupuncture is being “widely” practiced by thousands of  related medical practitioners such as physicians, dentists, acupuncturists, and other practitioners mainly for alleviation and avoidance of pain and for other health purposes. In fact it was reported that in 2002, the survey showed that 8.2 million of the American adults have made use of Acupuncture.

Hazards of the Practice and Its Licensing and Regulatory Requirements

The NCCAM provides in its website that the use of Acupuncture has a relatively lower account in terms of health problems and complication despite the huge number of treated individuals in America. Generally the negative complications resulted from the use of inadequately sterilized needles causing serious undesirable effects, including infections and punctured organs. Moreover improper needle placement, patient movements, or a defective needle may cause to tenderness, discomfort, soreness and pain during treatment.

The Food and Drug Administration (FDA) regulates acupuncture needles. These needles should be used by licensed practitioners only and need to be manufactured and labeled according to the required standards on  sterilization, nontoxic quality, and must be labeled for single use by qualified practitioners only.

Public hearings held  on April 25, 2006 in Asheville, and on September 27, 2006 in New Bern in North Carolina have acknowledged issues regarding the following safety measures in alternative medical practice:

Finally, for public awareness the NCCAM Clearinghouse provides information on CAM and NCCAM, as well as publications and searches of Federal databases of medical and scientific texts in service to the American nation regarding alternative medicines. 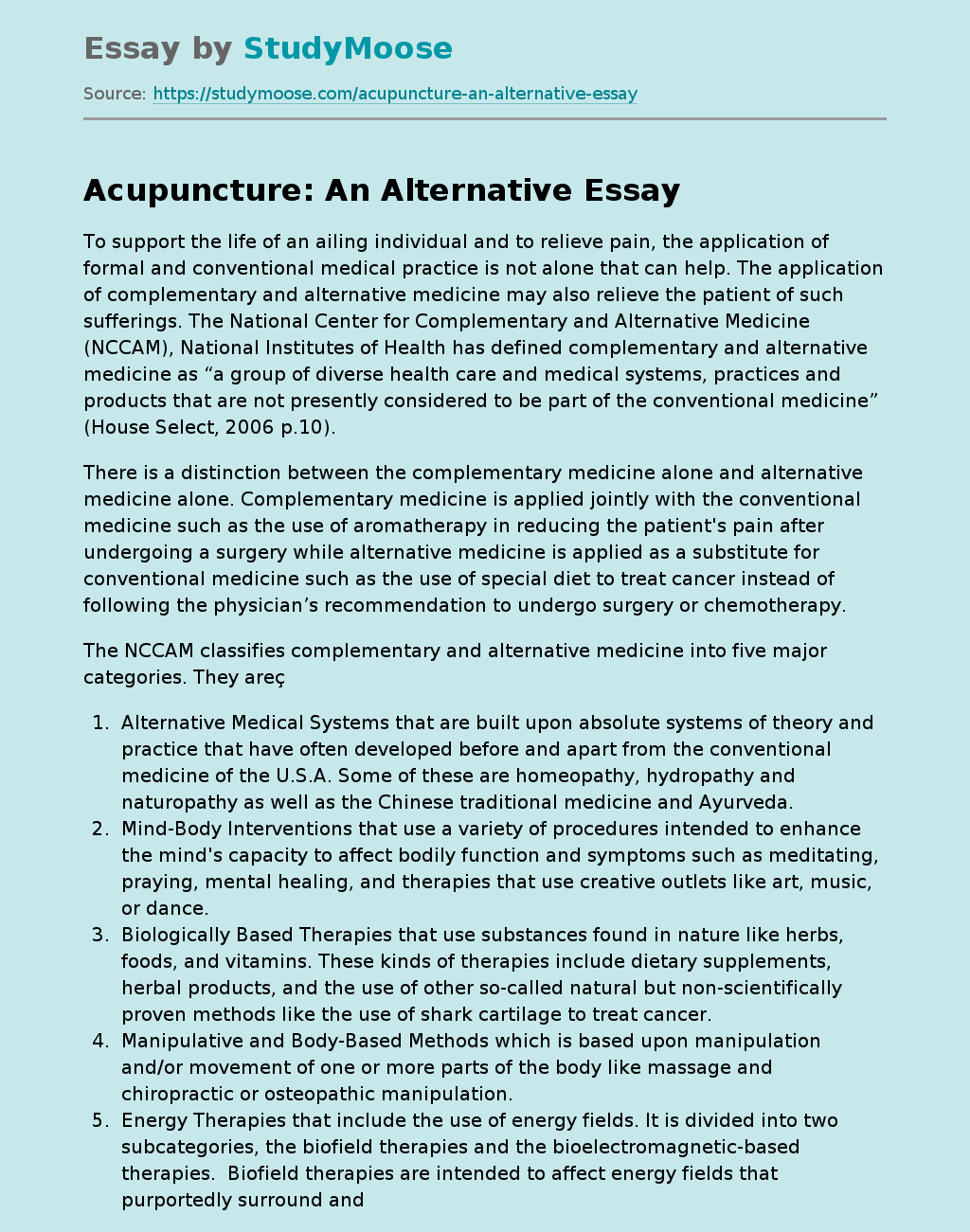