The definition of success differs from person to person and field to field. One could take economic success as a touchstone to label a person successful in life, ignoring his of her other failures, like divorce, health, inefficiency, etc. Others may look at a capacity for overcoming challenges, irrespective of what someone earns and the nature of their private life. So who is a successful person and who is a failure? Do school and college grades and examination results provide a way of predicting or ensuring future success?

If that is true, then we should encourage as many young people as possible to go to university and work hard to gain formal qualifications.

Don't use plagiarized sources.
Get Your Custom Essay on Academic Qualification Ensures Success in Life Just from $13,9/Page

But is it true? Aren’t some college drop-outs like Bill Gates and Richard Branson hugely successful icons of success? And should we automatically consider the millions of young people who have not had the opportunity to gain academic certificates to be failures in life? Success never depends upon grades.

If success and opportunities were measured by grades then the corporate world and potential marriage partners would not ask for biodata in resumes, where other qualifications are also mentioned.

Nor would they interview the prospects in order to find out what they are like as people, rather they would give a blind appointment to the people with the best paper qualifications. So qualifications alone are never enough, success depends upon physical characteristics, personality, and a willingness to work hard. Success is not getting a grade or a degree, if that was it then why aren’t all the graduates from Harvard, Oxford or Cambridge uniformly successful? The rule of success is hard work and destiny of course.

If a student of engineering gets good grades but he is not practically effective in relationship-buildings and solving crises or proper planning, even though he may be successful in getting a job but it will not lead him far. On the way he is sure to fade out. If you look into a directory of successful people who are doctors, engineers and IT professionals, then you will notice that many of them dream to be employed by people like Bill Gates or Richard Branson, who are prosperous despite not having college degrees.

In other words, prosperity does not depend upon academic qualifications but upon opportunities provided by entrepreneurs who may not be necessarily be highly educated. Successful entrepreneurs even benefit from not having academic qualifications, because going to college and taking examinations forces people to learn and think like millions of other graduates. This actually makes it less likely that they will come up with the truly mould-breaking insights and “disruptive” ideas on which successful innovations and new business models are built. Unfortunately the materialistic world has changed the concept of success.

It has become a rat-race where every student chases grades and therefore the entire perception of success and prosperity has changed. Rather than studying to reach our full potential, we do it because we think it is necessary for a successful career. So we spend ten years in school and a few more years of our precious life in college to get educated, then more time is passed in hunting for jobs. Even after that we may find ourselves in the wrong profession and lacking job satisfaction. And then recession comes along, when we are told that our wealth has been blown away by the foolishness of expensive fat-salaried CEOs.

Now comes a time when we go to work with a constant fear of losing the job we don’t enjoy. Is this the correct understanding of prosperity? So now the definition of success is changed. If you are able to save your job then you are successful! Can academic qualification stop us from becoming a civilization of drunkards, rapists and war-mongers, marked by broken families, domestic violence and crime? If you look at countries where the largest number of people have higher academic qualifications, they are the ones most affected by social breakdown.

And would you call the conduct of the US wars on Iraq and Afghanistan a successful example of the superiority of the US economy and society? In fact true success is shown in having the moral courage to speak out against atrocities and injustice, showing generosity towards the poor, and respecting our parents. These are characteristics which are found in people from all social and educational backgrounds, but often absent in many educated Americans and Europeans, in spite of the universities they have been to and the grades they have achieved. Often academic qualifications have no real relevance to the jobs graduates are employed to do.

A few decades ago employers in areas such as banking, engineering, management and government service recruited people straight from school at the age of 15 or 16, training them on the job and promoting them to higher levels of responsibility according to their ability. Today none of these jobs has changed very much, but all now require applicants have a university degree. Why has this changed? One reason is that the upper and middle classes are trying to protect their own jobs – demanding new recruits have expensive academic qualifications excludes many talented young people from poorer backgrounds. 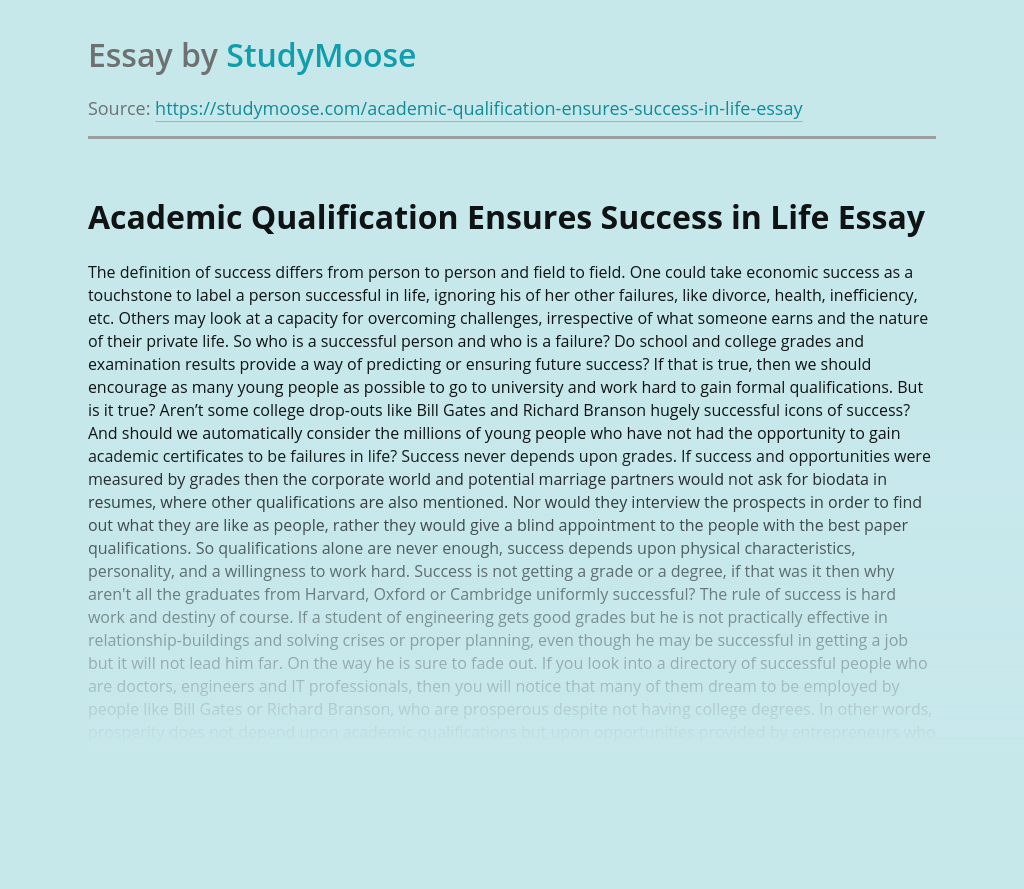 The world 100 years from now

A hundred years form now we would be living underwater in a city like Atlantis. The 2 main factors which would have contributed to this situation would be the raising temperatures I.E global warming and UV radiation. Because of this enormous change in lifestyle which had to take place, many other scientific projects would be...

An Analysis of Our Town

Needless to say, Our Town is one of the most popular plays by Thornton Wilder and not for nothing has it won the Pulitzer Prize in 1938. The most significant aspect in Our Town is the representation of the everyday life. Not only does the play explores American values of religion or family, it also...

Get Essay
Essay on Plato's Allegory of the Cave

Marlo Diorio Dr. Mishra – College Writing I “Allegory of the Cave” “Allegory of the Cave”, written by Plato, is story that contrasts the differences between what is real and what is perceived. He opens with Glaucon talking to Socrates. He has Glaucon imagine what it would be like to be chained down in a...

A Hard Life is No Excuse for Poor Academics