A Study Of The Theme Of Race, Culture, And Gender In Hames Baldwin's Notes Of A Native Son, John Berger's Ways Of Seeing Gloria Anzaldua's How To Tame A Wild Tongue And Richard E. Miller's The Dark Night Of The Soul

James Baldwin in his essay “Notes of a Native Son” explains how his race and tensions between white and black people shaped his life. John Berger in his documentary “Ways of Seeing” shows how a different perspective can change how people view what they previously saw. In “How to Tame a Wild Tongue”, Gloria Anzaldua connects the language she speaks to her sense of identity. Richard E Miller in his essay “The Dark Night of the Soul” goes into the mint of people who commit atrocities such as school shootings.

Don't use plagiarized sources. Get your custom essay on
“ A Study Of The Theme Of Race, Culture, And Gender In Hames Baldwin’s Notes Of A Native Son, John Berger’s Ways Of Seeing Gloria Anzaldua’s How To Tame A Wild Tongue And Richard E. Miller’s The Dark Night Of The Soul ”
Get custom paper
NEW! smart matching with writer

I don’t really have a sense of identity when it comes to race, gender, or cultural identity. I was born a black male and that is good enough for me. I realize this might not be good enough for some people and that is totally fine, but for me, my race and gender are not really identities. They are simply facts about me which I cannot change. I can choose to identify as a metalhead, or a gamer, or a liberal, or a conservative, but I cannot chose to identify as a white woman because that is just not how my brain is wired.

I do not participate in identity politics because it takes away from someone’s individual situation is their race, gender identity, or sexuality.

James Baldwin in his essay “Notes of a Native Son” and more specifically, the following quote asserts that even the best of ideas need to be criticized because everything can be improved.“I don’t like people who like me because I’m a Negro; neither do I like people who find in the same accident grounds for contempt.

I love America more than any other country in the world, and, exactly for this reason, I insist on the right to criticize her perpetually. I think all theories are suspect, that the finest principles may have to be modified, or may even be pulverized by the demands of life, and that one must find, therefore, one’s own moral center and move through the world hoping that this center will guide one aright. I consider that I have many responsibilities, but none greater than this: to last, as Hemingway says, and get my work done” (Baldwin 242).Baldwin states that because he loves America more than any other country, he insists on constantly criticizing her. This is because even the most perfect systems have room for improvement, and the only way that improvement is possible is if someone is willing to criticize it’s more problematic aspects. One must be able to criticize even the things that they love because that is the only way we can progress as a society. This is precisely why identity politics need to be criticized.

Baldwin also alludes to the Greek myth of Oedipus when trying to explain what drives people’s animosity toward each other.“Oedipus did not remember the thongs that bound his feet; nevertheless the marks they left testified to that doom toward which his feet were leading him. The man does not remember the hand that struck him, the darkness that frightened him, as a child; nevertheless, the hand and the darkness remain with him, indivisible from himself forever, part of the passion that drives him wherever he thinks to take flight” (Butler 248). Oedipus was left to die by his father as a child. I does not remember this, but he does have some kind of inner rage that causes him to kill a man over a minor dispute. The man he killed later turned out to be his father. Many people, whether they are aware of it or not, have something that drives them to do what they do. This drive could be a bad experience in the past, or it could be a complete opposite. In the case of Oedipus, it was being abandoned by his father. People who have abnormal levels of animosity towards a certain group of people may be driven by a past bad experience.

Sometimes, the things driving people make be cultural. Different people choose to base their cultural identity on different things. In Gloria Anzaldua’s case, she identifies most strongly with the language she speaks. “So, if you really want to hurt me, talk badly about my language. Ethnic identity is twin skin to linguistic identity–I am my language. Until I can take pride in my language, I cannot take pride in myself” (Anzaldua 245) Anzaldua defines her entire cultural identity as her language. This is significant because whether a person acknowledges it or not, their cultural identity has shaped their lives in one way or another. Many people have conscious and unconscious biases that affect how they treat people based on race, gender, language, and culture. Cultural identity is one of the most important factors in a person’s life.

Many people commit atrocities because they want to be known for something before they die. This is shown in Richard E. Miller’s essay “The Dark Night of the Soul”. “I want to leave a lasting impression on the world, and god damnit do not blame anyone else besides me and V for this, don’t blame my family, they had no clue and there is nothing they could have done, they brought me up just fucking fine, don’t blame toy stores or any other stores for selling us ammo, bomb materials or anything like that because it’s not their fault” (Miller 421). When people have nothing left to live for, they just decide to go out with a bang (sometimes literally). These people may be driven by a bad experience in the past or a simple desire to be known for something.

Miller details how so many unhappy men who were rejected by society for most of their lives turn to violence as their only outlet. This is similar to how marginalized groups resort to radical violence to “combat oppression”. “All these unhappy men, the betrayed and the betrayers, the real and the fictional. Is there any hope for them? Or for the wasted worlds they’ve left in their wake? Thinking about these lives, so deeply entangled with violence, neglect, and lies; watching the news, which is forever reporting that another angry man has entered some building or schoolyard, guns blazing; feeling the weight of these stories, and knowing their inevitable movement towards death, destruction, and humiliation: such thoughts only serve to plunge one deeper into the darkness” (Miller 432). If you throw people to the curb enough times, they will come back with a vengeance.

Being ignored by a large portion of society can create very strong emotions in a person as detailed by Miller. “When Eric Harris began his diary with the statement, ‘I hate the fucking world’, he wasn’t laying the groundwork for a transformative inner voyage; he was girding himself for battle” (Miller 441). The person Miller was quoting was a perpetrator of the columbine massacre. He had been frequently bullied, and was an outcast at his school. This led him to seek revenge against his classmates. This is not to justify what he did, revenge is never a valid excuse, and nobody deserved to die, even if he had been bullied by them. However, the cycle is still noted. If you push someone to the curb enough times, they may come back with a burning vengeance.

Nobody can know for sure what drives racists, bigots, and people who commit atrocities. There are many things that drive them, some of them being shared with normal people as well. The thing that drives many people, which bothers is identity politics, which pits people against each other who would normally be allies. Identity politicians do this by portraying one group as the oppressor, and another as the oppressed. This creates an us vs them mentality that divides people based on race, gender, sexuality and much more. People should be dealt with on an individual basis. They should be judged on their accomplishments rather than then the perceived oppression they have faced.

A Study Of The Theme Of Race, Culture, And Gender In Hames Baldwin's Notes Of A Native Son, John Berger's Ways Of Seeing Gloria Anzaldua's How To Tame A Wild Tongue And Richard E. Miller's The Dark Night Of The Soul. (2019, Aug 19). Retrieved from https://studymoose.com/a-study-of-the-theme-of-race-culture-and-gender-in-hames-baldwins-notes-of-a-native-son-john-bergers-ways-of-seeing-gloria-anzalduas-how-to-tame-a-wild-tongue-and-richard-e-millers-the-dark-night-of-t-essay 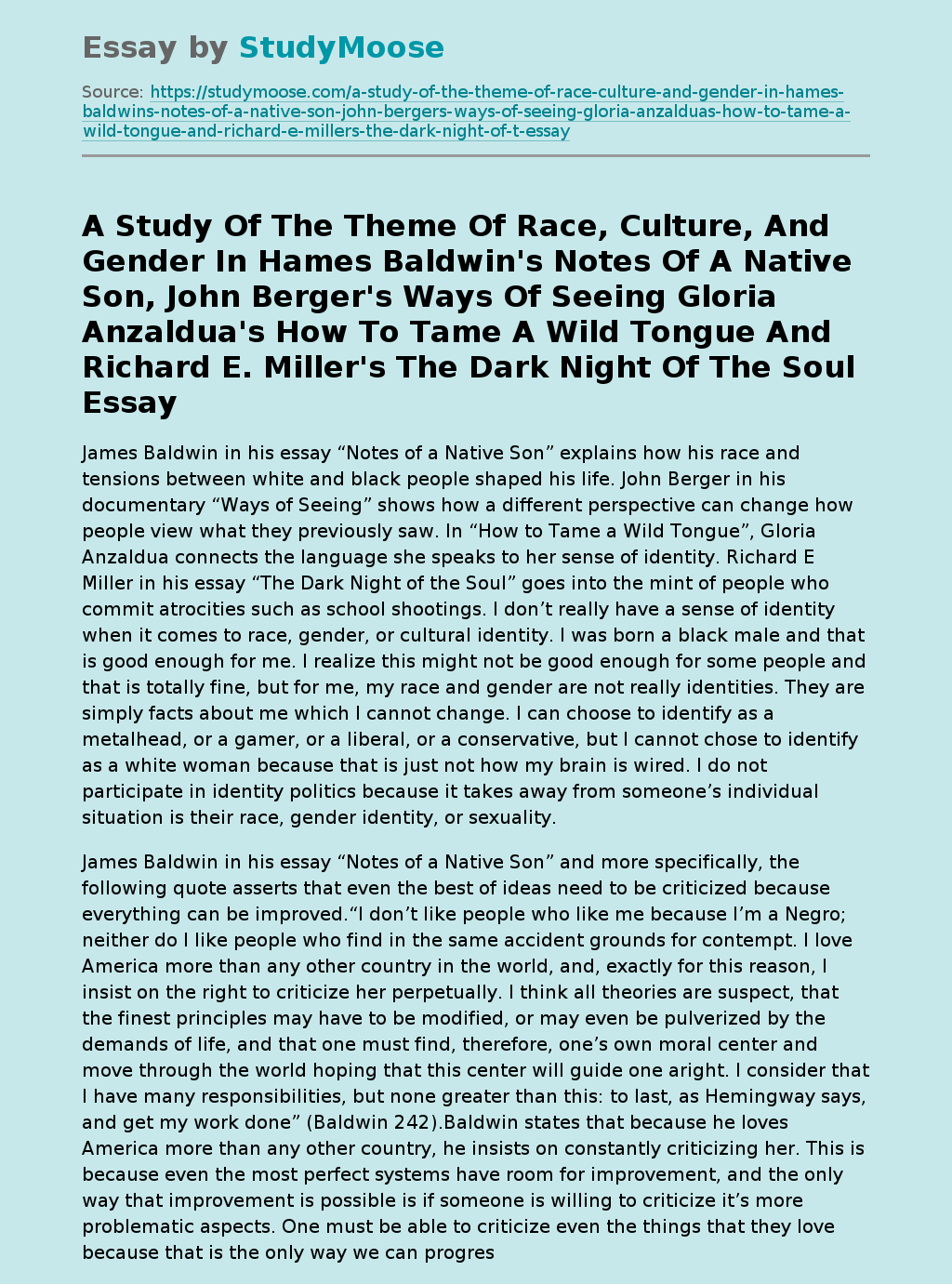