Matters of education, like any other sociological issues, can cause a lot of controversy if they are handled in a manner that does not represent or take into account the views of all the stakeholders (ABC, 2010). This has been the case with the My school website in this country.

Long before the My school website came into operation, support as well as opposition could be clearly witnessed from different stakeholders including teachers, the Australian Education Union (AEU), and the government through the independent Australian Curriculum Assessment and Reporting Authority (ACARA) which is charged with the responsibility of making available to the public data about schools that is nationally comparable.

However, the most controversy has arisen after the website became operational.

The issues of contention vary depending on the particular sides embroiled in the debate. However, regardless of the views that are being raised, the effects that the controversy about the My school website has generated have been dire not only to students and their schools but also to teachers in the Australian education curriculum, the parents, as well as investors who need to finance education programs in the country.

This paper critically discusses the sociological issues that have surrounded the My school website prior to and after its inception.

This is with a view to establishing the extent to which the controversy has affected the various stakeholders in the education sector in the country. The My School Website My school is a website which profiles close to a thousand Australian schools.

All these schools may be searched by any interested person or organization using filters such as the location of the school, its sector, or even the name. Perhaps the most important information to be found on the website is that of statistical and contextual nature; but also included is information about the results by the National Assessment Plan for Literacy and Numeracy (NAPLAN).

These results allows for comparisons to be done for schools; particularly those that are statistically similar. Therefore, the My school website allows for the searching for schools across the nation; finding local schools in one’s own area; comparing schools that are statistically similar; viewing school-level results by NAPLAN; and identification of schools’ performances so that there is an allowance for sharing successful strategies (Peatling, 2010). Contentious Issues

Proponents of My school, who mainly comprise of the government, NAPLAN, and a section of parents, argue that the website has allowed parents and other people an opportunity to assess schools on the basis of key indicators, particularly on literacy and numeracy, so that they can make informed decisions about where to enroll their children. They also argue that through the site parents can monitor the performance of their children and so be better placed to advise them accordingly.

The site has also been lauded for bringing together all schools across the nation so that finding information about school performances and other records is no longer difficult (Peatling, 2010). This site, they argue, has enabled the results of schools on national tests to be better understood in a manner that is both meaningful and fair. The site has also enabled schools seeking to enhance their performance to learn from others which have similar populations. By providing extensive information on Australian schools, the My School website introduces a new level of transparency and accountability to the Australian school system.

However, the opponents have forwarded a number of critical issues which they believe are actually making the education sector to suffer. The first contention and one which has generated the most opposition is the use of particular indices to rank schools (Peatling, 2010). These indices have apparently failed to present to the public what the actual facts about schools are because it has been proved that some schools that are known widely to be underperformers have been ranked or placed in the same category as other elite schools whose national record has been known by the people to be very high.

A notable example that has been widely quoted is the grouping together of Bulli High School, Wollongong, and Trinity Grammar, Summer Hill; as well as ranking of Scotch College which is among the most prestigious schools in the country alongside Epping North Public School. This issue has particularly caused a lot of concern among teachers, led by the Australian Education Union, who have used it to reiterate their allegation that the My school website is deeply flawed and cannot be relied upon for its inaccuracy, invalidity, and incompleteness (Peatling, 2010).

Another key issue has been the margin of error that has been identified in the ranking of the schools in the test results by KAPLAN. In some cases, it has been found that the margin of error has been as wide as 34 – pointing out that there was no way the website could be relied on to convey the correct information to the public. From the AEU’s perspective, the site is only a source of conflict and serves to create tension and unnecessary competition among teachers and schools.

The union reiterates the need for the education sector to be made rather autonomous so as to avoid events that can compromise the quality of education (Peatling, 2010). AEU holds that tests ought not to be used to rate the student’s ability but only as a means to ascertain where a child or learner is up to. Sociologically, tests results ought to be the secret of the learner because the test was done that one learner alone. Exposing such results to other people, especially when the results are poor, serves to embarrass the learner and cause one to be less confident in school.

The overall outcome is a tendency to continue failing in successive tests. Another issue that has raised a storm about the My school website is that it is being used to discriminate against certain ethnic communities, particularly the Aboriginal students (ABC, 2010). This lament, mainly from parents, has stemmed from the system used where schools have been listing the number of Aboriginal students enrolled there as part of the statistics posted on the My school website.

This, the parents contend, is discriminatory as it tends to bring to the fore the notion that the Aboriginal students are responsible for the poor performance of schools so that the more of them a school has the lower it is likely to perform on the KAPLAN index. This can never be farther from the truth (ABC, 2010). The Clash Between Government Policy and Public Opinion Even on the international scene, there have been constant clashes between the policy of governments and what the public feels is the best.

In matters of education in particular, there has been a series of policy frameworks that governments have put in place without considering their effects on the other stakeholders. For instance, issues regarding the performance of educators in learning institutions like schools and colleges have been hotly contested because while the policy might require teachers and other educators to be appraised based on their performance, the indices used in certain cases never really depict the actual input by these educators.

For instance, teachers can be assigned to students who are hard of learning for a reason or more and so such teachers, if rated on the basis of the performance of their students alone, never really get justice done. Similarly, it is not appropriate for the government to continue using indices to rank schools and publishing such information on the My school website without considering other factors. The effect this has on teachers is that they are likely to become demoralized and put less effort in their work for they know the evaluation of their work is not at all fair.

For parents, the use of the My school website has had different effects (Peatling, 2010). First, it may help them to ascertain the best performers among schools and so enroll their children in such ones. However, there is another more critical issue about what parents whose children are in poor-performing schools can do. The natural inclination of such parents is to withdraw their children from these poor performing schools and have then enrolled in other schools with better performance indices.

This, if allowed, would cause a mass exodus of students from some schools into others, eventually causing another problem of overcrowding and subsequent declining in the quality of education in those schools initially ranked highly. But since the government is not prepared to allow such migrations, continuing to use the My school website might only cause parents a lot of anxiety from knowing that their children might never be able to make it in life because they are in lowly-ranked schools.

For the students, they will get discouraged if they learn that their school does not perform well in comparison to others. As AEU has claimed, education is not all about literacy and numeracy but more about individual students’ ability to learn to do many other things in life. Students in lowly-ranked schools might be led into the false belief that their teachers are not competent enough and so give up trying to improve their performance.

However, the My school website has had the positive effect of creating a competitive environment in schools so that low performers are compelled to work harder to improve while the best performers try their level best to maintain or improve their performance record (Peatling, 2010). Conclusion The My school website is bound to continue eliciting a lot of debate in the days to come with varying effects on the society, the students, teachers, and the government. What is clear in this debate is that there has been no attempt to have the feuding parties to work together to sort out their differences.

Instead, every side has been unilateral in its decisions and has not cared about the implications of its actions on the students, teachers, and parents. While the government is downplaying the opposition to the My school website by AEU and citing it as any other opposition that happens whenever there is change, the fact is that the union has key sociological issues that ought to be addressed if the education standards in this country are to be kept high. Sociologically, therefore, the feuding parties ought to work together to find ways of ironing out their differences before the matter gets out of hand. 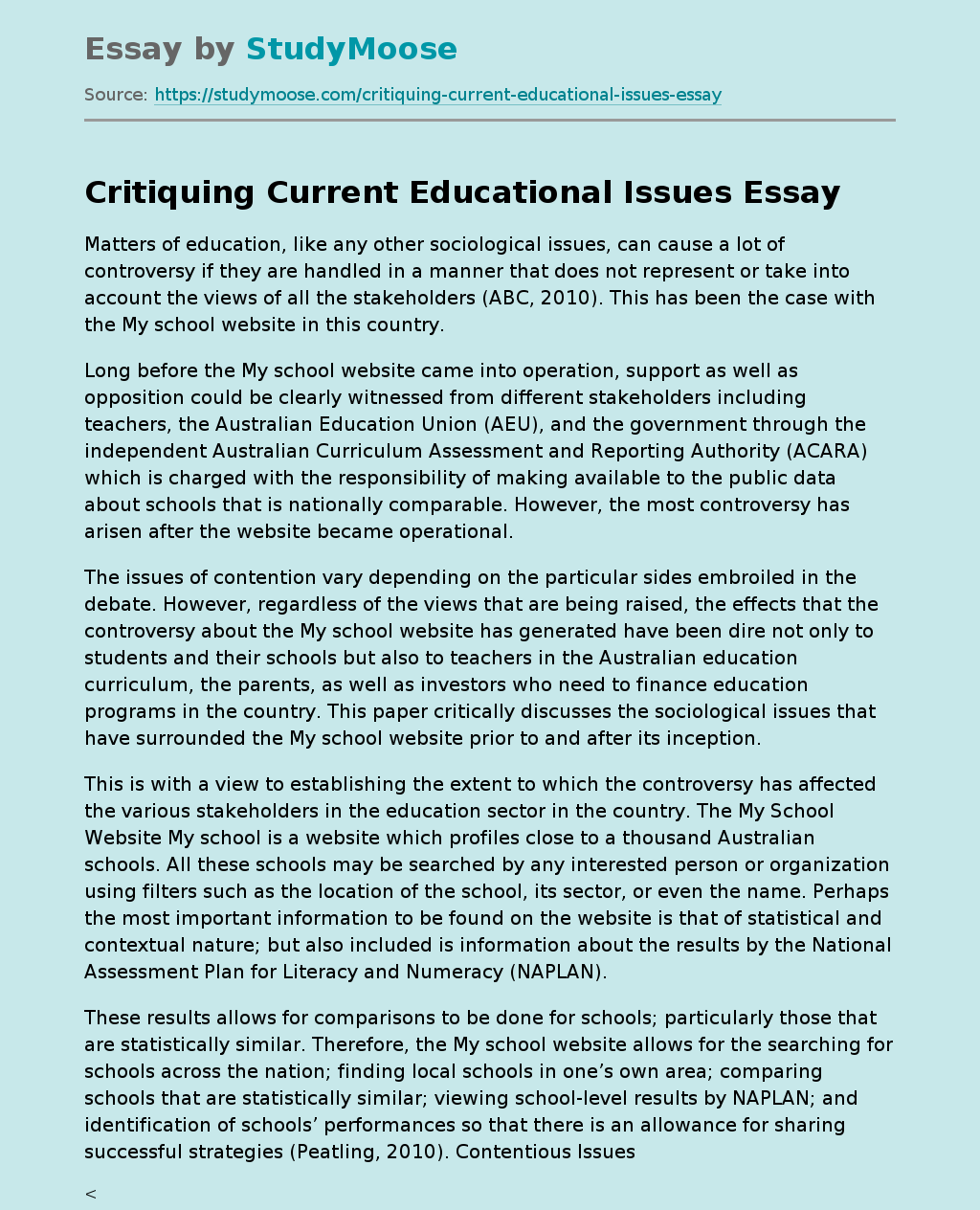