The Critiquing of Film, A Christmas Story

A Christmas Story is an American Christmas comedy classic film that has been shown on television for many years ever since it was produced in 1983. This classic holiday film is shown every year during the Christmas season and is shown in a 24 hour marathon. Many families watch this film over and over every year during the Christmas season as if it was new film. There are several technical and literary elements that can be seen by the audience based on how the film was directed and edited.

Don't use plagiarized sources. Get your custom essay on
“ The Critiquing of Film, A Christmas Story ”
Get custom paper
NEW! smart matching with writer

A Christmas Story was based on short stories of author Jean Shepherd, but it is directed and produced by Bob Clark.

Clark is also the screenwriter of this film. The film’s setting is in Hohman, Indian which is really a fictitious version of Shepherd’s hometown. He tells the story by narration of his character nine year old Ralph Parker, better known as Ralphie, played by Peter Billingsley. Although, Ralphie is nine in the film in which the audience can see in the screen play, the narration is performed by Ralphie as an adult, which is played by Jean Shepherd.

Therefore, the film is not told in real time, but it is told in narrative cut pieces. Adult Ralphie talks about how little Ralphie has a wild imagination.

For example, it is illustrated how little Ralphie saved his family from the bad guys buy using is Red Ryder BB Gun with a compass in the stock. The film is set out to be a satire because of the ridiculously imagination that Ralphie has as he day dreams about owning a Red Ryder BB Gun one day and saving his family from getting attacked (Goodykontz & Jacobs, 2011).

Although the film is narrated by adult Ralphie who tells the story when he was a young boy, it still remains in chronological order because events occurred from beginning to end in the story.

The film is in fact told in a flashback sense. Flashbacks of the film have a positive effect on the film. The flashbacks are symbolic for Ralphie’s day dreams. The cinematography in A Christmas Story was very well performed. The lighting was done in a great way because it is day light for the majority of the film. There are a few instances when the lighting is dark. A good example is when Ralphie’s father, also known as “The Old Man” was fixing the flat tire on side of the road. The cinematographer made it so that the scene was dark, symbolizing it is night time.

Close up shots show how Ralphie’s friend Flick has his tongue stuck on the pole after Schwartz triple dog dared him to do it. The pole has a suction tube that simulated the freezing of Flick’s tongue to the pole. There are also close up shots of the children’s face that are in shock that it really worked as Flick is screaming and crying. The editor utilized continuity editing which has an advance setting of shots so that when the different camera positions will display the illusion that everything is happening in a continuous time and space (Goodykontz & Jacobs, 2011).

This allows the audience to view the film without being confused. An example is at the beginning of the movie, Ralphie is looking through the window of a store with his friends as they pointed to all of the toys. Ralphie only had one thing in mind, which was the Red Ryder BB Gun. So throughout the movie, shot by shot and scene by scene Ralphie talked about how awesome it would be to receive the Red Ryder BB Gun for Christmas. He would day dream and fantasize about it all of the time.

Then on Christmas, just as he thought that the only thing that he received was tinker toys, his dad surprised him by buying him the Red Ryder BB Gun after all. There is a variety of different types of sounds that really created a big part of this movie. This film would not have half of the effect as it would if it was viewed during the silent era. All three basic categories of film sound were displayed during the viewing of this movie. The dialogue was displayed during the entire movie as characters spoke to one another. The background music always had some type of tune playing.

Also, there were a lot of sound effects that took place throughout the movie as it grasped and maintained the viewer’s attention. Every film uses sound in some form or another in order to lure the audience into the movie and keep it there (Goodykontz & Jacobs, 2011). The voiceover is another type of sound that used as the narrator speaks on the entire story, yet focusing on the Christmas present that Ralphie would love to receive. The director approaches the subject matter of the film by finding the right actors to play his characters.

Jack Nicholson, a very well-liked actor was considered for the role of the old man, but the role was given to Darren McGavin who expressed his gratitude for being selected (Clark, 1983). Clark casted several other several other actors that were all perfect fits for the characters. At first he wanted Peter Billingsley to be the voiceover for Ralphie, but it would be quite obvious in which the film could not has been as intriguing if the narrative voice was the same as the main character, Ralphie.

A technique that Clark employs to set the mood in the film is by using unrealistic sound effects and comical counterpoint to the images as they are viewed frame by frame. A Christmas Story has had a very huge impact on society in the early 1980’s when it was first broadcasted. The film continues to maintain a huge impact on everyone 29 years later. The film brings families together every year during Christmas time which is when families are supposed to come together and celebrate the birth of Jesus Christ. The film did however portray a small controversial issue with young boys owning BB guns.

Everyone knows the catchy phrase in this film, “You’ll shoot your eye out! ” Well, this is one of the reasons why parents aren’t comfortable allowing their children to use a BB gun at a young age. Comedy is the type of genre that is as this film is being watched. The director made it so that every character had their own little sense of humor generating laughter and excitement from the audience. Ralphie’s little brother, Randy would always have extra clothes on because their mother was afraid of him not being warm enough for the weather outside.

Every time this scene was displayed it became very comical. One scene showed how Ralphie and his friends were running away from the neighborhood bullies and Rand was the last one to be running. Another instance is when Randy was knocked over outside and he had the inability to rollover and stand up. The director wanted the audience to laugh and enjoy this hilarious scene. There are some shots were the film is broken from its obvious genre which is comedy. For example, the scene where Ralphie really shot his eye out and broke his glasses, was not quite the laughing matter.

Upon analyzing the film, Clark, along with producer’s Gary Goch and Rene Dupont and Screenwiter’s Jean Shepherd and Leigh Brown all had great chemistry in allowing this film to come together as it did. A Christmas Story was written and directed by the same person. Most directors will shape the story as they see fit. Clark shaped the story as he saw fit. He placed every character in the exact scene settings where he knew would bring out the best that the film had to offer.

Clark and Shepherd both have cameo appearances in the film which gave them a personal the ability to be a part of the film that they created (Clark, 1983). In conclusion, A Christmas Story is an American classic movie filled with comedy that is shown every Christmas season. It brings families together by illustrating that Christmas is a time where family comes together no matter how good or bad Christmas turns out, family is the most important thing that you can have. So the movie is more than just a comedy, but the literary elements illustrate how it brings families together to celebrate the birth of Jesus Christ.

The Critiquing of Film, A Christmas Story. (2016, Oct 03). Retrieved from https://studymoose.com/the-critiquing-of-film-a-christmas-story-essay 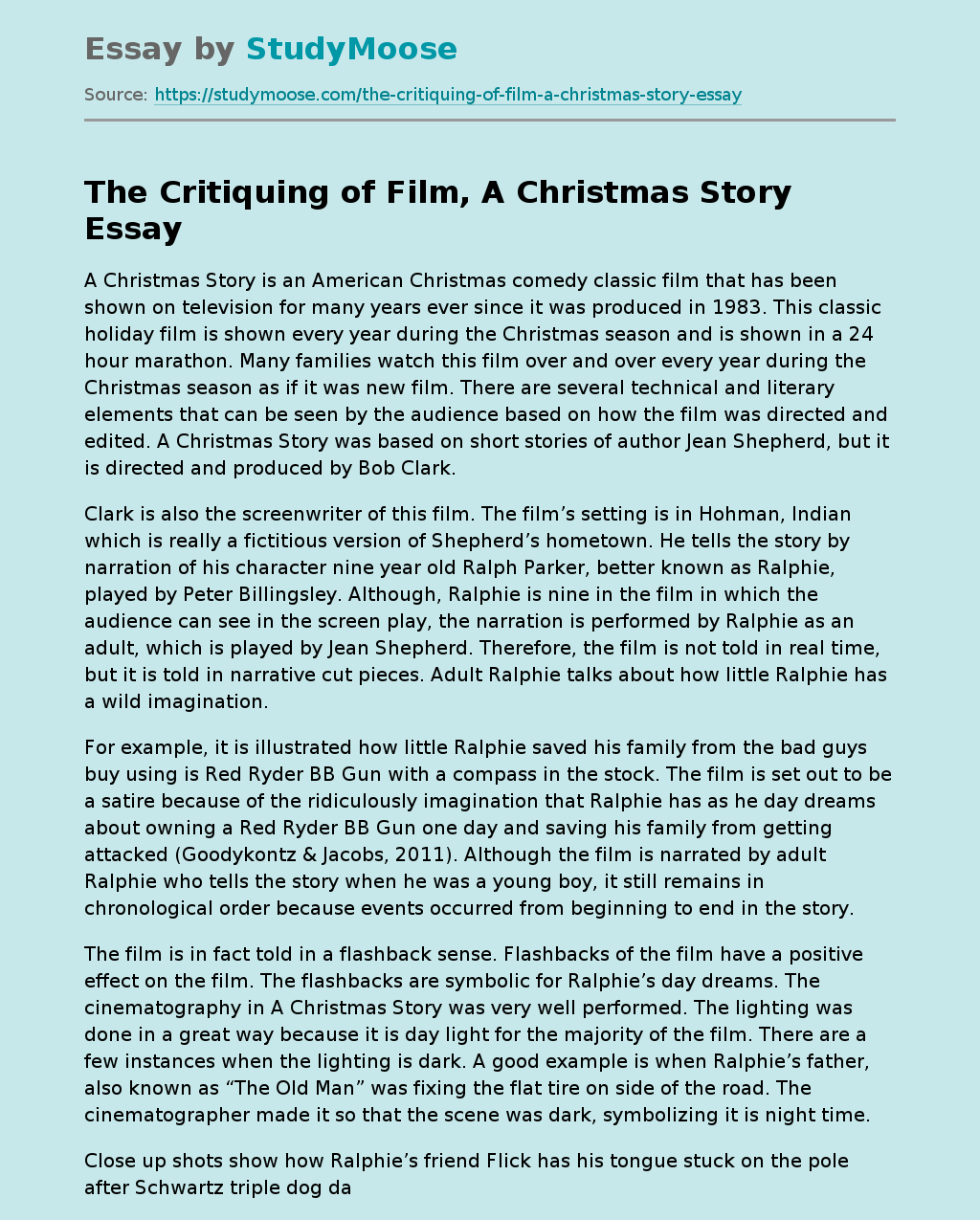