’’A Simple Exchange of Niceties’’ by Joanne Fedler

’’A Simple Exchange of Niceties’’, a short story by Joanne Fedler, 2007. In the text ’’A Simple Exchange of Niceties’’ the narrator lives in what could be a big town. In this town there is a park which she often visits, in this park there is a certain bench that she likes better than the others, and she calls it her own bench. The theme is teenage problems and about teenagers developing into the adulthood.

Don't use plagiarized sources.
Get Your Custom Essay on ’’A Simple Exchange of Niceties’’ by Joanne Fedler Just from $13,9/Page

The narrator’s language is very normal and is what every other American citizen could be speaking. The language contains a few curse words and slang words too. Example given: ‘’ She seemed so bloody keen on kids ‘’ (Page 11 line 133). The narrator does not have much self confidence; she had a one night stand with a Damien from the bar, which resulted in her getting pregnant. Damien told her that he never wanted to have kids with a ‘’trashy whore’’ like her after he had fertilized her, which made her feel like a trashy whore too.

She has lost the sympathy of her mother too; the narrator is a very troubled person who is shop-lifting and has been impregnated at a very young age; this shows that she is not very sure of herself, and has not grown up yet.

Her mother does not even want to bail her out from the prison after she had been caught shop-lifting. The narrator is a bit arrogant against people she does not know. Example given when the old lady has issues untwisting her bag, and the narrator just ignores it; which shows that she does not like to communicate with strangers, which she also mentions – ‘’When I’m sitting on my bench, I’m generally not in the mood for small-talk and chit-chat.’’ – (Page 9, line 43). She complains about when she is sitting on her bench and people come and sit down without asking if she is okay with it; this is a very two-faced action, would she herself even ‘’exchange niceties’’ if she was the one approaching a stranger on a bench? Her arrogance is also shown when a lady with a book and a bottle of water comes along; the lady says that she should not smoke.

Her attitude is very typical for the society of youth, and the fact that she smokes while having a growing fetus in her stomach and not even caring about it truly enlightens that she has not grown up yet. From her oasis which is the bench, the narrator seems to be developing from being a late teenager who is acting very cool and not really caring about other than herself, to realizing the qualities of life, and understanding other people. As she speaks with the lady with the book ‘’When Fertility Fails’’, she seems to develop a kind of sympathy for the lady as she speaks of her and her husband’s problem. The fact that the lady cannot be fertilized by her husband makes the narrator act different than she is used to.

Example given when the lady says that she would sells everything that she possesses if she could be a mother, and the narrator replies by – ‘’ ‘’It wasn’t meant to be,’’ I found myself saying, which really wasn’t me speaking. ‘’(Page 10 line 115-116) and she refers to as if it was her Nan speaking. As this is not how she normally would react, it is an obvious sign that she is developing into a young woman, particularly when she decides to give away her coming baby to the unhappy lady. When the narrator tells her mother that she is pregnant, the mother seems to state that she actually cares for her – ‘’ don’t you DARE give my granddaughter away, ‘’ (Page 12 156) which made the narrator believe that she is actually worth something. And when the narrator gives birth to the baby and the mother tells her that she remembers when she was an infant lying on her chest. This truly shows that the mother is happy and has realized that her daughter has grown into a young woman.

’’A Simple Exchange of Niceties’’ by Joanne Fedler. (2016, Dec 25). Retrieved from https://studymoose.com/a-simple-exchange-of-niceties-by-joanne-fedler-essay 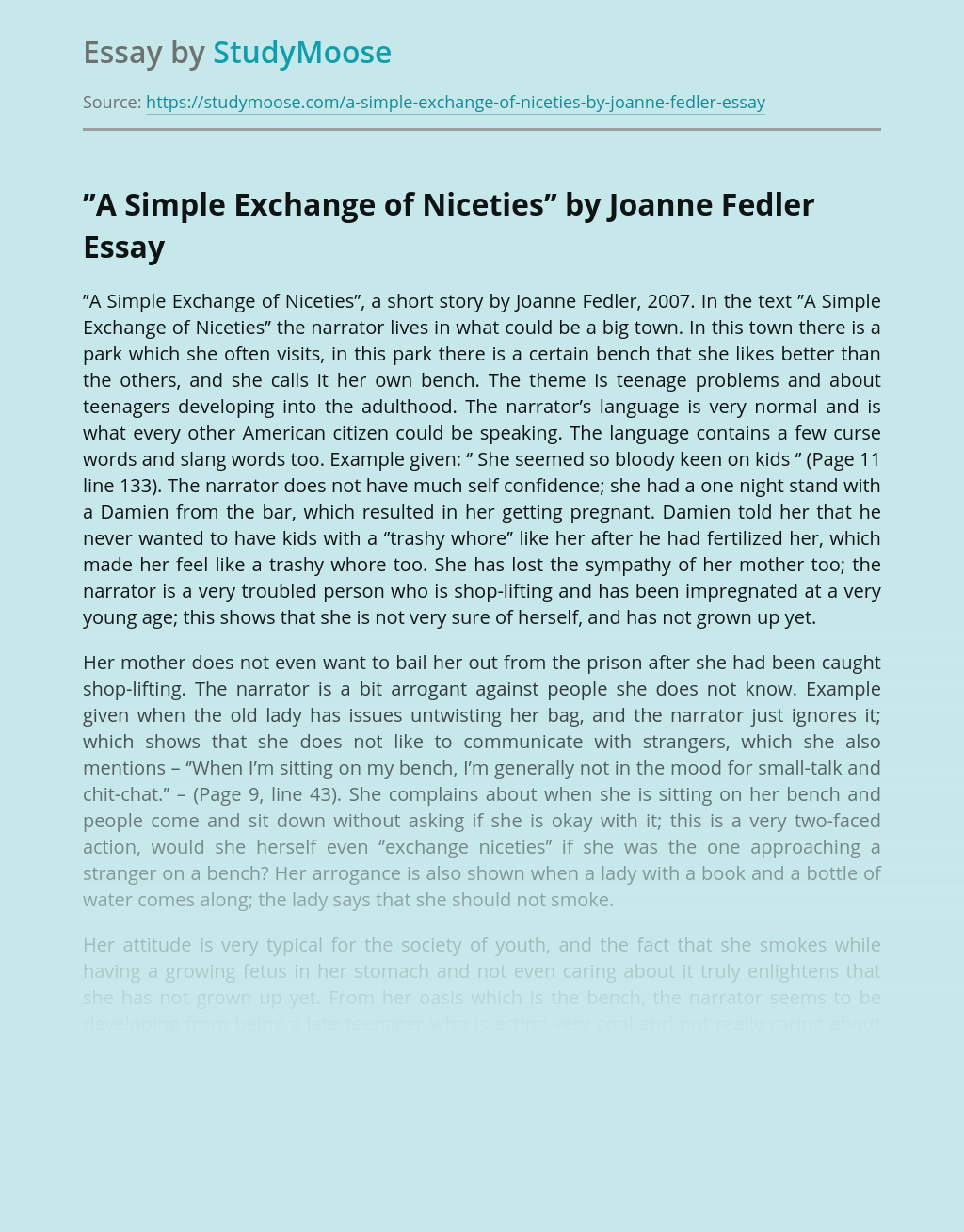 A Place Where the Sea Remembers: Character Like Candelario Marroquin

Rate this post In A Place Where the Sea Remembers, the author talks about a lot of unique characters. Candelario Marroquin is a man who has had a very hard life, but now that he has been promoted it looks like his life with Chayo, his wife, is looking up. He is a big character...

Rate this post The teenage pregnancy rate for 1997 rose all the way up to 62.7 percent, this was the highest it has been in years! When I first saw this fact I knew something would have to be done about it. This high pregnancy rate in teenagers is in fact a major problem, because...

Get Essay
Reflection on Lifespan Development

Why women should not have an abortion

Rate this post How would you feel if someone told you to kill a life or take away someone’s ability to live? I firmly believe that you could hardly do it. Nowadays, however, this situation is taking place everywhere in the world through abortion. Is it good or bad for women to have an abortion?...

We Do Abortions Here Critical Analysis

Rate this post We do abortions here; that is all we do. There are weary, grim minutes when I think I can not bear another basin of bloody remains, utter another kind expression of peace of mind. So I leave the treatment space in the back and grab a new chart. Quickly I am speaking...