Child abuse is the controlled acts that result in the physical or emotional damage of children. The term ?child abuse? covers different ranges of behavior, from physical assault by parents or gaurdians to neglecting a child. Child abuse is wrong and God didn?t create children for adults to abuse. They are blessings, not burdens. There is child abuse in the world because of ignorant people who want to feel powerful, so they beat on little kids and these kids think that violence against children is okay because their parents did it to them.

They learn the wrong ways to parent a child, and this has to stop. It?s destroying our country.

There are four main types of abuse: physical, sexual, emotional abuse and neglect. Neglect is the most popular type of abuse. There are two types of neglect: pysical and emotional. With physical neglect, a parent fails to provide physical things, like food, medical care and shelter. Emotional neglect is when a parent fails to comfort the child or not pay attention to them.

This includes being unaffectionate to them or allowing them to use alcohol or drugs. Physical abuse is intentional acts of violence that can injure or even kill children. Signs of physical abuse may include unexplained bruises, burn marks or broken bones. Sexual abuse is when adults use children for sexual satisfaction or force them into sexual activities.

It may begin with kissing and/or fondling and progress to more indulging acts, like oral sex or intercourse.

Emotional abuse is when an adult destroys a child?s self-esteem. You can do this by repeated verbal abuse in the forms of shouts, threats, humiliating or degrading criticism. Other types of emotional abuse are confinement, like shutting children in a dark closet or basement, and what is called social isolation. Social isolation is like when an adult denies the child to have friends.

In 1997, 3 million children in the U.S. were reported as abused or neglected according to the National Center of Child Abuse and Neglect. There is another 1 million children whose cases go unreported. If convicted of child abuse, the abusers could spend up to one month in jail. Not prison, jail. If these people do not go to prison, they should at least spend more than one month in jail. These people are disturbed if they beat on innocent children. Is is a fact that 2,000 children under the age of 18 are killed by parents or their caregivers and more kids under the age of four die from abuse than falling down, drowning, fires, choking on food or car accidents. 18,000 abused children do not die from the abuse, they suffer permanent disibilites.

When the public sees child abuse cases being reported in the news, they assume the abusers are mentally ill but fewer than ten percent of these people have mental disorders which is very sad. These people supposedly love their children, and what do they do to show their love? They batter their children, rape them and make them feel like it is their fault that it happened. It is said that they really love their children, but they have less patience and a less mature attitude than most parents. There is no excuse for mistreating children and society is making excuses saying that there are many reasons why someone would abuse a child. They use stress and being a social outcast as excuses and because of this, we are hurting our country?s future.

The consequences of child abuse and neglect can be devastating on a child. The physical injuries can vary from bruises, scrapes, burns, possibly brain damage, permanent disibilities and even death. The psychological injuries of abuse and neglect can sometimes be worse than the physical. They can last a lifetime and can include a low sense of self-worth, a reduced attention span, learning disorders and an inability to realate to their peers. Severe cases of abuse may cause disorders like depression, anxiety, identity crisis and an increased risk of sucide. During the abuse process, the victim may fall into a life of violence and crime.

Some children may show no signs of disturbance, and many can cope with their problems. It is said that having a high intelligence, excellent achievement in school, having close personal relationships and not having a temper may help vent all the mistreatment in their life. This is really sad, these children grow up and don?t expose the people who hurt them in their childhood. The abusers walk without any guilt hanging over them and they don?t have to pay the bad deeds that they did. This is the kind of thing that makes people sick when they watch the news and hear about all the abuse. It?s revolting.

There are many types of social programs in the United States. Usually the country and state levels of these programs have attempted to reduce and prevent child abuse. There are current approaches to determine who could potentially be at high-risk of being abusers, such as a young, single, first-time mother. These programs provide parent training, counseling, eduation and social support by visiting the home frequently, ecouraging the parent to be involved in the community, since it is less likely for an abuser to be involved with his/her community, and increasing the gaurdian?s knowledge about social services.

There is also a program that is for unmarried teenage mothers. It is a home visitation program and these people visit the mother?s home before or when the child is born for two or maybe more years. With all the mother?s in the program, only four percent have gone on to abuse their child. 19 percent of women not in the program abuse their child(ren). Sadly, there are studies that show the more intervention programs a family receives, the more abuse occurs in the family.

Many children learn how to be violent from their parents and they grow up and mistreat their own children. With this, the abusive behavior becomes a cycle and is transmitted through the generations. 30 percent of abused kids become abusive parents, but two out of three percent of non-abused children become abusive. Children who experience abuse and violence may adopt this behavior and use it as an example for their own parenting. Thankfully the majority of victims of abuse do not become abusers. Experts believe that later in life, these kids realize their parent?s behavior was wrong. Children who believe that their behavior is what caused the abuse and and deserved it are more likely to become abusive parents than the children who believed their parents were wrong to abuse them. 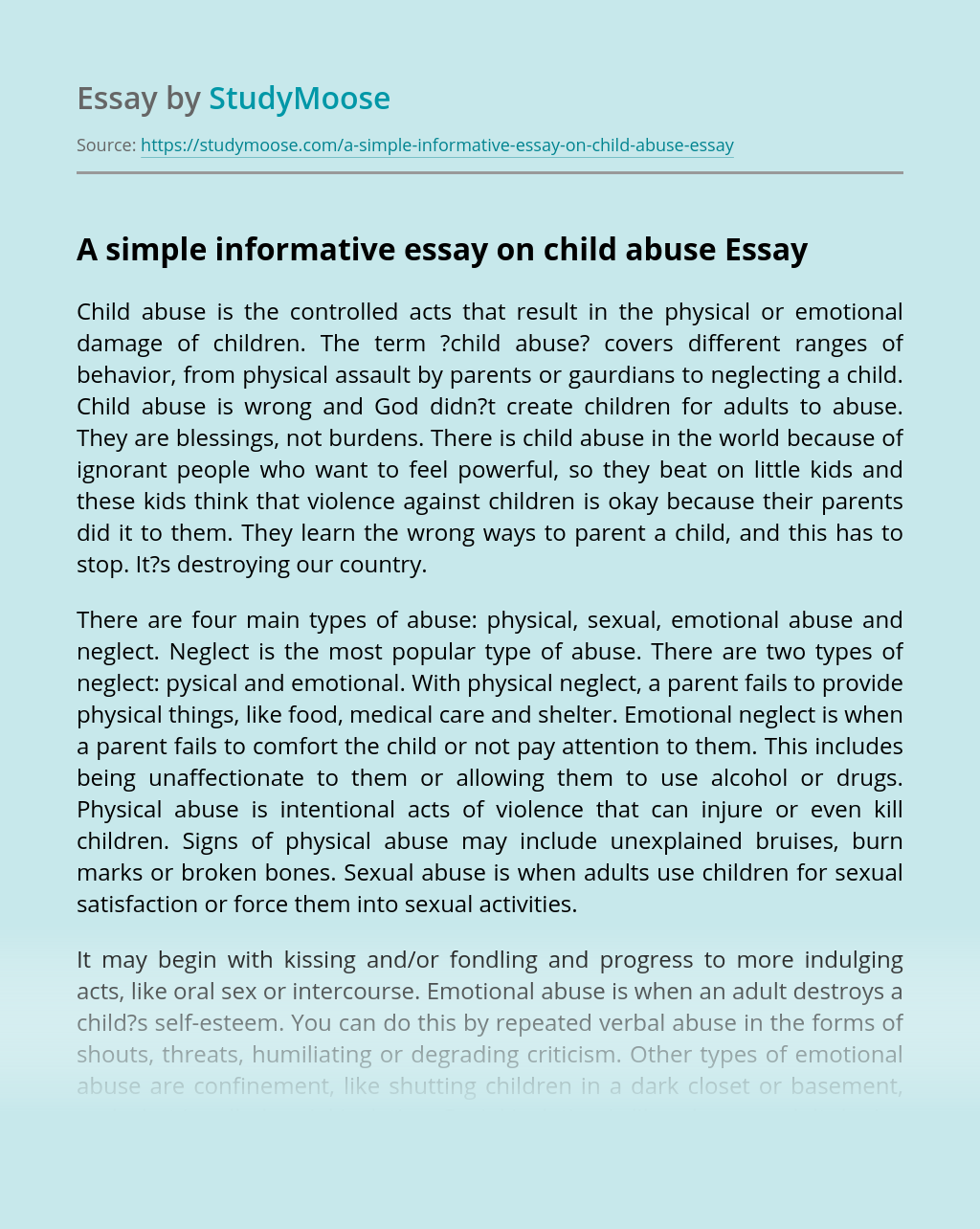 Don’t waste time
Get a verified writer to help you with A simple informative essay on child abuse
Hire verified writer
$35.80 for a 2-page paper
Stay Safe, Stay Original