A Review on Lifeboat Ethics

Lifeboat ethics: the case against helping the poor is a famous essay written by Garret Hardin, a human ecologist in 1974. This article aims to re examine the lifeboat ethics which was developed by the author to support his controversial proposal.

In the theory, the world is compared to a lifeboat with a carrying capacity of 60. There are totally 50 people on board, representing comparatively rich nations, while the 100 others swimming in the ocean outside the lifeboat stands for the poor nations. To solve the dilemma of whether the swimmers should be allowed to climb aboard at the risk of lifeboat’s safety, Hardin suggested that no admission should be granted to boat, or to interpret it in a straight way, no humanitarian aids should be offered to the poor countries.

Regardless of the additional factors which the author took into consideration from the real world in the essay, in my opinion, the basic metaphor itself is questionable.

Firstly, the status of the lifeboat is not an accurate reflection of reality.

Arguably, natural resources of the earth are finite, however, this does not equal to the scarcity of resources in the control of the rich nations. On the contrary, nowadays in the developed countries, what the rich have used is out of proportion to their actual needs, which not only leads to colossal waste each year but also creates disposal problems. A familiar example is the popularity of losing weight among the western world, which is not solely a way of pursing beauty but also a clear indication of the growing number of obese people who consume food excessively.

In contrast, in the third world especially poverty-stricken nations like Ethiopia, millions of people are filled with untold suffering.

They drag themselves on the street from day to day, begging for only a slice of stale bread. Due to the unfair distribution of resources caused by the affluent people’s favorable political position, most rich nations currently obtain more than enough resources and they are still casting their greedy eyes on the untapped poor regions. In the light of the facts above, in the lifeboat metaphor people on board actually occupy more room than normal and the real carrying capacity of a lifeboat is more than 60. With no admission given to those swimmers who are in need, the room is not allocated “to each according to his needs”, a principle the author cited in explanation of the rationale behind the lifeboat ethics.

The second doubtful point is related to Hardin’s computation of conscience. In defense of the survivors’ guilt arising from not helping the poor, he claimed that “the net result of conscience-stricken people giving up their unjustly held seats is the elimination of that sort of conscience from the lifeboat”. He defined guilty about one’s good luck as a type of conscience and the newcomer’s lack of guilt about the rich people’s loss as conscience drain; but the author deliberately omitted the morality of rich people’s indifference to the poor asking for help. Counting the negative effects on total conscience in the lifeboat if no rescue is attempted, the final solution to the lifeboat dilemma might be changed.

Essentially, the author’s negligence of social injustice against impoverished people and the ethical issue indifference is just a result of his bias for the rich countries. To improve the general population quality, the author repeatedly emphasized the necessity of reproduction control in poor nations and increasing the proportion of rich nation’s population. This suggestion in fact is based on the assumption that the people in rich nations are innately superior to their counterparts in poor countries, which is an apparent violation of the creed that everyone is born equal.

In conclusion, the poor people should not be the sacrifice of the population growth in the developed regions. Logic and rigorous as the essay Lifeboat ethics: the case against helping the poor may appear to be, the author wrote more on behalf of the countries on board, group of which he belonged to. The author urged people to get rid of sentiment and make rational decisions, but ironically he himself deceived his mind with prejudice and sense of superiority.

A Review on Lifeboat Ethics. (2016, Oct 09). Retrieved from http://studymoose.com/a-review-on-lifeboat-ethics-essay 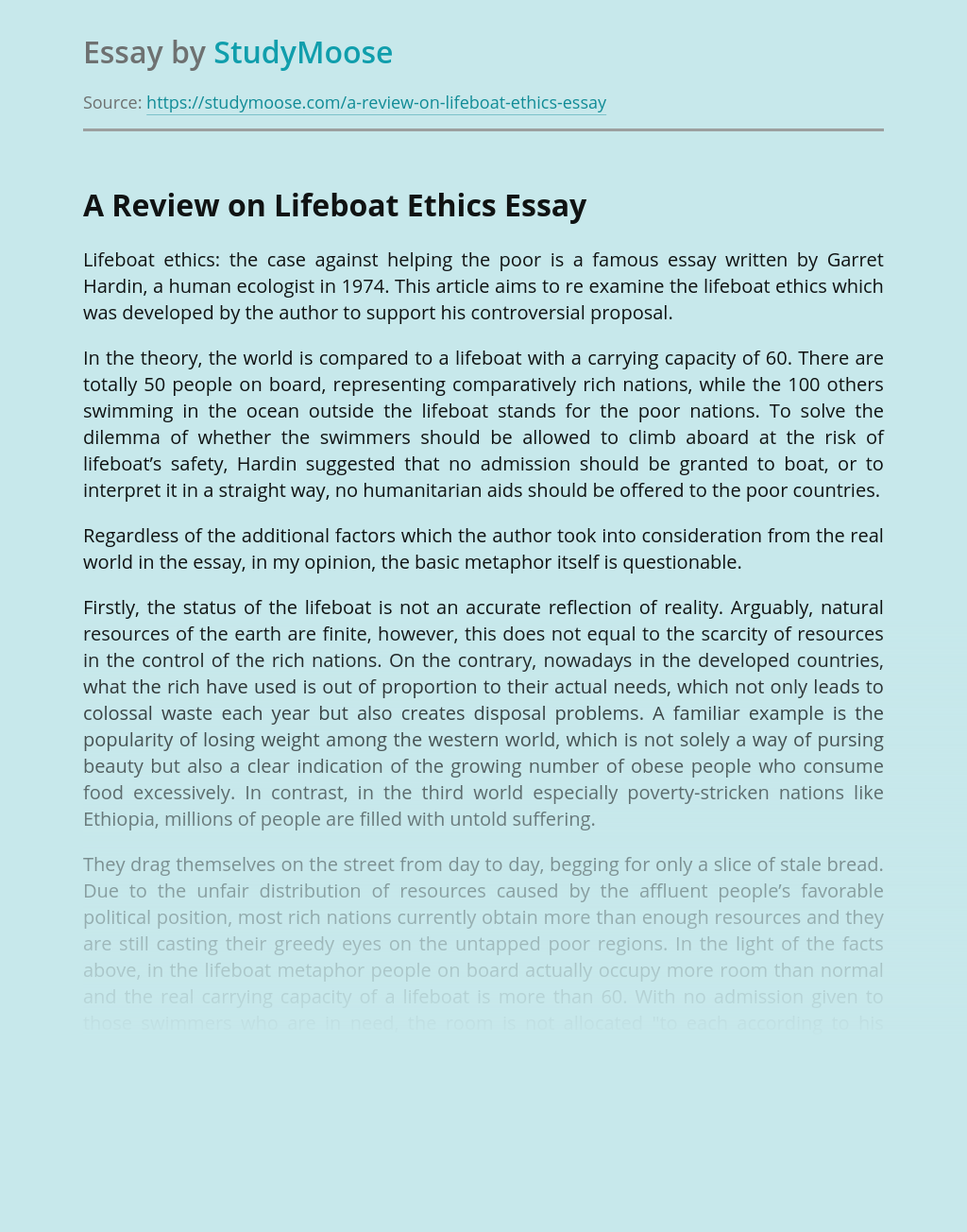 Don’t waste time
Get a verified writer to help you with A Review on Lifeboat Ethics
Hire verified writer
$35.80 for a 2-page paper
Stay Safe, Stay Original