In the article The Right to Fail, William Zinsser believes that the word dropout should not always have negative connotations. Persons who are under a certain age and leave school, or drop out, are often considered failures by societies set standards. Zinsser believes these standards set by society makes failing an almost unspeakable act and that the media, through advertisements and commercials, shows successful people living an American dream, filled with happiness, not the failure associated with dropouts.

Failure should be accepted as a part of the growing process, another way for young people to explore and find the right path.

Don't use plagiarized sources. Get your custom essay on
“ Zinsser-The Right to Fail Summary & Analysis ”
Get custom paper
NEW! smart matching with writer

Zinsser says that this will help to inspire more free thinking and nonconformity that inspired people like Thomas Jefferson and Henry David Thoreau. Failure should be embraced rather than feared and individualism should be something to strive for.

Society’s negative view of failure seems to be prevalent today, but younger generations don’t seem as afraid of failure as previous generations.

Proficient in: Fear Of Failure

Zinsser believes that this is a step toward a more personalized, individual view of success and failure, where people can fail without fear and have their own gage of success.

William Zinsser uses several types of evidence in support of his article The Right to Fail. The most prevalent type of evidence used by Zinsser is opinion. The first line of the article, “I like “dropout” as an addition to the American language because it’s brief and it’s clear.” Further examples of opinion can be seen throughout the article, in Zinsser’s statement of how he believes adults who watch hours of television should be considered more of a dropout than a young college student who leaves school and in another when he states that taking away societal pressure towards failure may encourage more free thinkers such as Thomas Jefferson.

Zinsser also relies on expert testimony within this article to support his theories. Film directors Fred Zinnemann and Richard Brooks agree that they have both learned more from their failures that from their successful films.

Statistics from a Gallop survey help support Zinsser’s point that today’s younger generation have not accepted society’s norms in regards to failure and seem to be creating their own rules. These facts and figures are accurate and be easily verified.

First-hand observation was used when he indicated that he met some members of the younger generation who volunteered for VISTA and they seemed to be happier than people who have achieved success, or the so called “American dream”.

This supporting evidence is supported by the authors experience as a highly regarded feature writer, author and college professor. His experience working with college students and observing and writing about human nature makes his opinion reliable and believable.

The author does seem to go a bit off track with the paragraph about Salinger’s “The Catcher in the Rye”. It may be entertaining to speculate about how Caulfield’s life may have turned out, it does not offer concrete evidence to support Zinsser’s dropout theory. 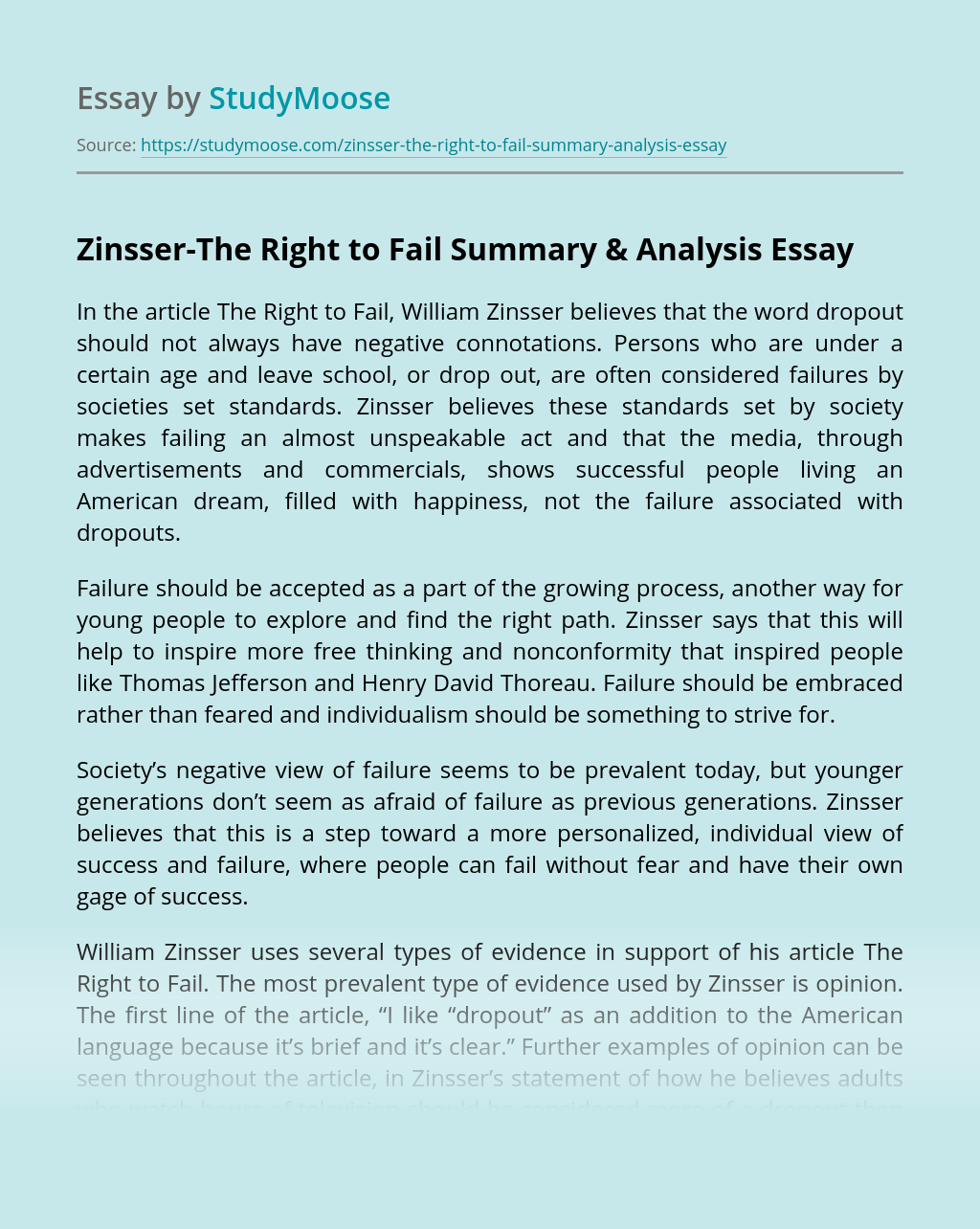