Daylight savings time, it happens two times a year, causing a multitude of occurrence, some of these being good, while some are not so good. However, it has been a hot topic for debate recently. To keep daylight savings time, or to kick it to the curb is the question many congressmen are asking themselves. Keeping daylight savings time allows the people of the United States to continue with years of tradition implemented during war time that has been a part of their daily lives ever since which is irrelevant to today’s standards.

Don't use plagiarized sources. Get your custom essay on
“ Daylight saving time ”
Get custom paper
NEW! smart matching with writer

Being first put into action by President Roosevelt during the Second World War to save energy that the war effort needed, some of the states decided to keep a version of this, but only during the summer (Source A). Thinking this movement would save the American population not only the artificial lighting energy, but also it would save them money.

However, nowadays the average savings per household during daylight savings time is about four dollars (video) and the “corresponding national savings of forty to fifty megawatt hours per day” (Source D).

These numbers seem to be miniscule compared to how it could affect their lives. If it only saves an average of four dollars per year, DST is really useless. Considering it was added during a war time and its original purpose was to save energy and get people outside more, there is no need for it now with the more efficient light bulbs we now have and the heating and cooling machines that are saving more money than DST ever could.

Daylight savings time affects the natural rhythm of sleep that humans have, not only causing them to be less productive on the job but also it’s a health problem. As O’Connor said people tend to sleep on standard time, not DST. Now daylight savings time is affecting our sleep along with our health. The video which was viewed in class went into greater detail stating that the Monday after DST there is a higher percent of heart attacks and suicides. From personal account, Mondays are no fun but with more suicides…that’s a little extreme. So, DST is a very serious issue if there are more heart attacks and suicides.

And as stated above the body sleeps on standard time, so DST causes sleep deprivation. This in turn causes there to be less productivity on the job, the week after daylight savings time happens there is an estimated $480,000,000 lost businesses (Video). Daylight savings time just seems like one problem after another when looking at the big picture and how everything affects the other. Not only are people more tired, there are serious health risks associated with it, and the lack of productivity might just be the wakeup call big businesses and the government are look for. It’s essentially screaming that DST needs to be ended.

Daylight savings time is something that is outdated, and was used for a war ear. As a country there is no need for it anymore. It is costing the country more than it’s saving it, along with causing more stress put on business leaders. Really, there is no use for it, and this shouldn’t even be a debate. The answer is clear, DST is a thing of the past and that is where it should stay. 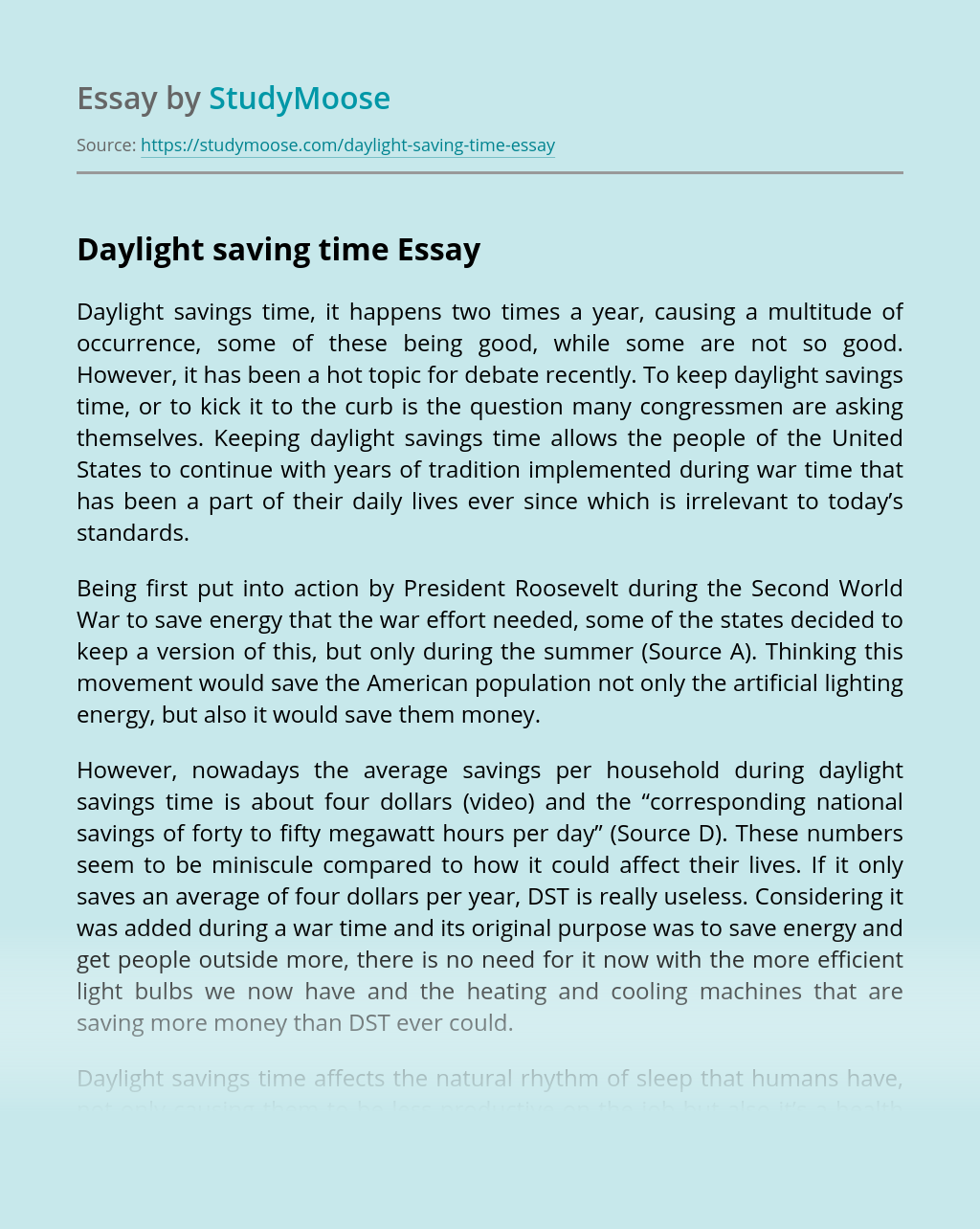