A Personality of Mark Zuckerberg

Mark Zuckerberg is the Founder, Chairman, and Chief Executive Officer of Facebook. Zuckerberg started Facebook in 2004 at the age of 19 from the confines of his Harvard dorm room. Facebook has grown from a college students only craze to the leading social networking sight around the globe. Mark later dropped out of Harvard and moved his company to Palo Alto, California to pursue the growth of his business. Zuckerberg’s job as Chief Executive Officer is to set the tone and direction for product strategy for the entire company.

Don't use plagiarized sources. Get your custom essay on
“ A Personality of Mark Zuckerberg ”
Get custom paper
NEW! smart matching with writer

At 27 years old Zuckerberg is one of the youngest Chief Executive Officers in the world. He leads the design of Facebook’s service and development of its core technology and infrastructure (Facebook, 2012). His leadership style is to lead by example, showing passion for his work, he is also about rising to the challenge ever challenging his employees and he expects them to rise to the occasion.

Mark is not one to coddle people or give positive feedback, he has been known to seem uninterested even when listening to a pitch or idea weather one on one or in a boardroom (Carlson, 2012).

In all actuality he is listening and taking everything in and putting the puzzle pieces together he usually does not acknowledge an employee’s good idea until he takes it and puts it into action (Carlson, 2012). Employees that have confidence in their own abilities, are self-motivating, and emotionally sound are most likely to flourish in the presence of Mark Zuckerberg (Carlson, 2012). Mark’s philosophy is to innovate and execute.

One of the values as stated on the company website is: “We have a saying “Move fast and break things.” The idea is that if you never break anything, you’re probably not moving fast enough.

At Facebook, we’re less afraid of making mistakes than we are of losing opportunities” (Facebook, 2012). In a technology based industry it pays to be cutting edge and the first to the drawing board with new ideas this is important to the Founder of the company as well as the survival of the company as technology advances into the future. Sometimes this philosophy makes Zuckerberg seem reckless like when the company launched Beacon, an advertising program, which would automatically share what you bought online with all of your Facebook friends (Deneen, 2010). This program was launched around the holidays and reviled what some had bought as gifts or even engagement rings all without the users consent (Deneen, 2010). After being first to launch a program of its kind the company then had to rewind and apologize for all the trouble it caused and alter how it would work in the future(Deneen, 2010).

Even though Zuckerberg is a kid genius of sorts starting a company so young that has been continually successful as it continues to grow even he had a mentor. His mentor was Steve Jobs who was Co-Founder and CEO of Apple and whom recently passed away (Farooq, 2011). It shows that he admired someone in a similar industry and wanted to learn how Steve grew and managed his company(Farooq, 2011). I think it is important to have a mentor that one can confide in and learn from who is a part of the same industry and has had a career or success that you admire. Having a mentor can help one realize and reach his or her own goals and possibly prevent making mistakes first hand. In this research I learned that your leadership philosophy can change and grow. A lot of the change and growth in Mark Zuckerberg’s philosophy may have come from being so young and having to change and grow with his ever growing business.

Being able to adapt to change and rise to the occasion as a CEO of a company is imperative. I hope to apply this in my own industry by thinking outside of the box and being confident enough in myself to share my new ideas. I also learned that you may not always be perceived the way that you hoped while in a leadership position. Mark has been labeled as carless and rash when making decisions to launch new ideas on Facebook. He has launched many concepts that had negative back lash or did not have all the kinks worked out before introducing them to the public. His main goal though is to be innovative and on the cutting edge of his industry and he has stayed true to this regardless of the mistakes made and negativity and scrutiny that comes along with the growth and innovation.

As I move up in the business world I hope to stay focused on my personal and company goals and not let negativity from co-workers, media, or friend derail me from my personal goals. My employees may not always understand my methods but it isn’t there job to understand it is there job to rise to the challenges I set in front of them. He has also been criticized for his choice of clothing as a Chief Executive Officer he wears jeans, t-shirts, hoodie sweat shirts, and tennis shoes on the job.

He even wore this attire when discussing the possibility of his company becoming publicly traded on Wall Street. He is a no non-sense kind of guy who is not afraid to be and come as he is. He is the brain child of his organization so he is able to dress as he likes on the job without anyone telling him otherwise but outsiders do not agree an let him know that his attire is inappropriate. I think that as I move up in my industry I will keep in mind that first impressions are very important even down to the clothes on my back regardless of how successful I am making a great impression and dressing appropriately for my job will help others to take me and my ideas seriously.

A Personality of Mark Zuckerberg. (2016, Nov 27). Retrieved from http://studymoose.com/a-personality-of-mark-zuckerberg-essay 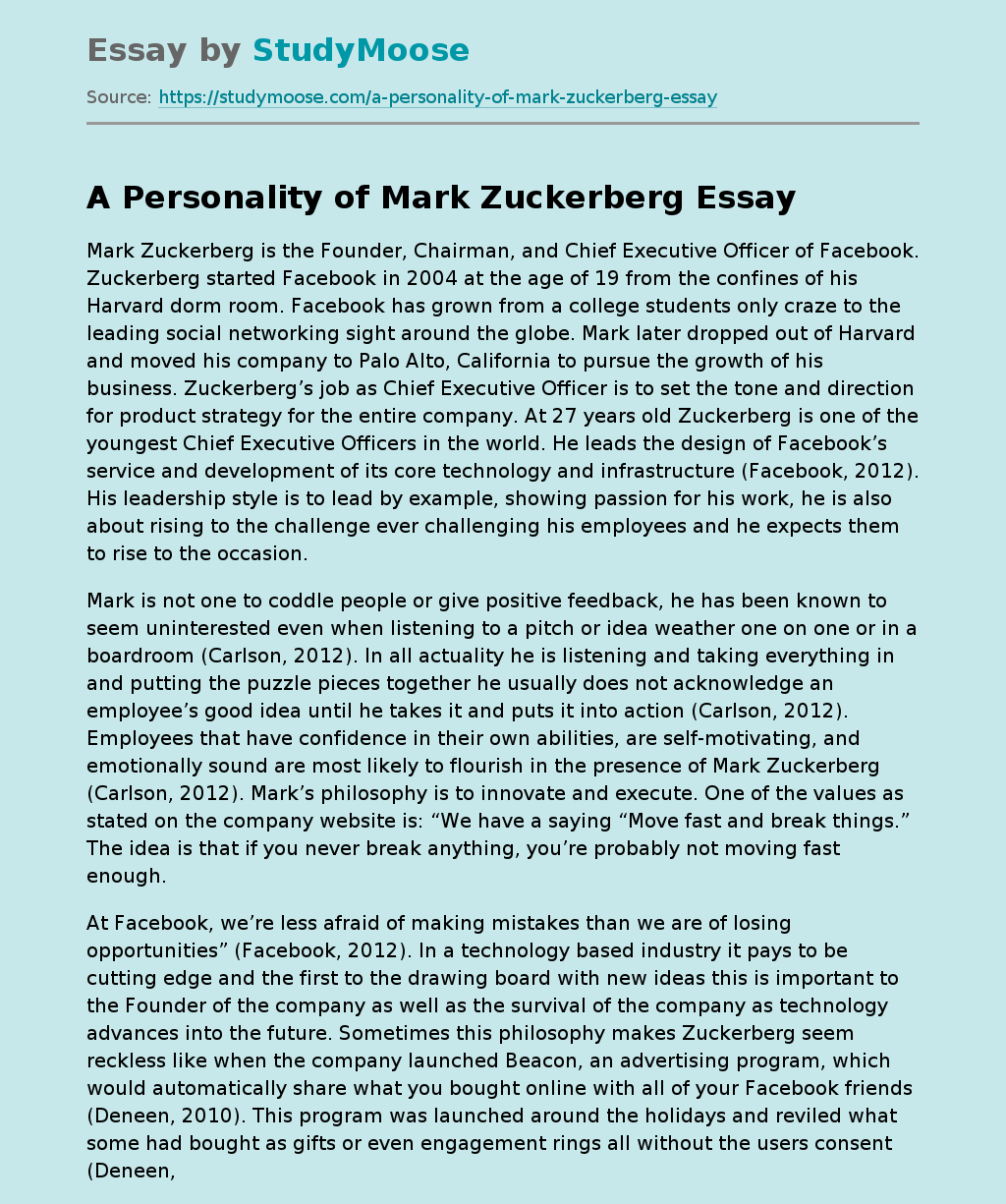