Murder on a sunday morning

On May 7th, 2000, in the parking lot of Hotel Ramada Inn in Jacksonville, Florida, Mary Ann Stephens, a 65-year-old woman and her husband were approached by a black man who held them at gunpoint and asked for the woman’s pocketbook. Mrs. Stephens gets shot in the head before her husband. Ninety minutes later, a 15 year old black American teenager, Brenton Butler, gets accused of robbing and murdering the elderly white tourist. The police arrested the first black American guy they came across, a boy who was on his way to apply for a job at a Blockbuster Video outlet.

Turn in your highest-quality paper
Get a qualified writer to help you with
“ Murder on a sunday morning ”
Get high-quality paper
NEW! AI matching with writer

They had no evidence to tie him to the crime other than the positive I. D by the sole eyewitness to the murder, husband of the woman. Mr. Stephens was sure about one thing only; the shooter was a black guy. Butler gets interviewed by an intimidating police officer, Michael Glover, son of Sheriff of Jacksonville. Detective Glover took Butler deep into the woods allegedly to find the murder weapon but instead he hit him a couple of times to get a confession.

Later, the case came into the hands of a lawyer, Patrick McGuinness. McGuinness investigated with another lawyer, Ann Finnell.

On his meeting with his client, Butler confessed to him that he was innocent and was forced to confess murdering the woman. McGuinness’ skepticism forced the investigations to look into the trivial evidence which he collected. Patrick McGuinness fought a battle for Brent Butler’s rights by proving that the case showed incompetence and prejudice shown by the Jacksonville Sheriff’s Office.

He pointed the accusing finger at the corrupt and shameless culprits: Detectives Williams, Glover and Darnell. McGuinness disclosed that there was no physical evidence, DNA tests, weapons or other witnesses tying Butler to the crime.

He interrogated policemen on the stand and challenged their own words. The police admitted that they did little to investigate the crime and didn’t follow up any other leads. At the same time, Brenton Butler’s family had faith in his innocence and firmly believed that God will set Brenton free. They stood by him and encouraged him. In the end, McGuiness succeeded in proving his client innocent and the jury declared Brenton Butler not guilty. The film acts as an eye-opener to the deceits of the police investigation and suggests rebalancing of the justice system.

Murder on a sunday morning. (2016, Oct 03). Retrieved from https://studymoose.com/a-murder-on-a-sunday-morning-essay 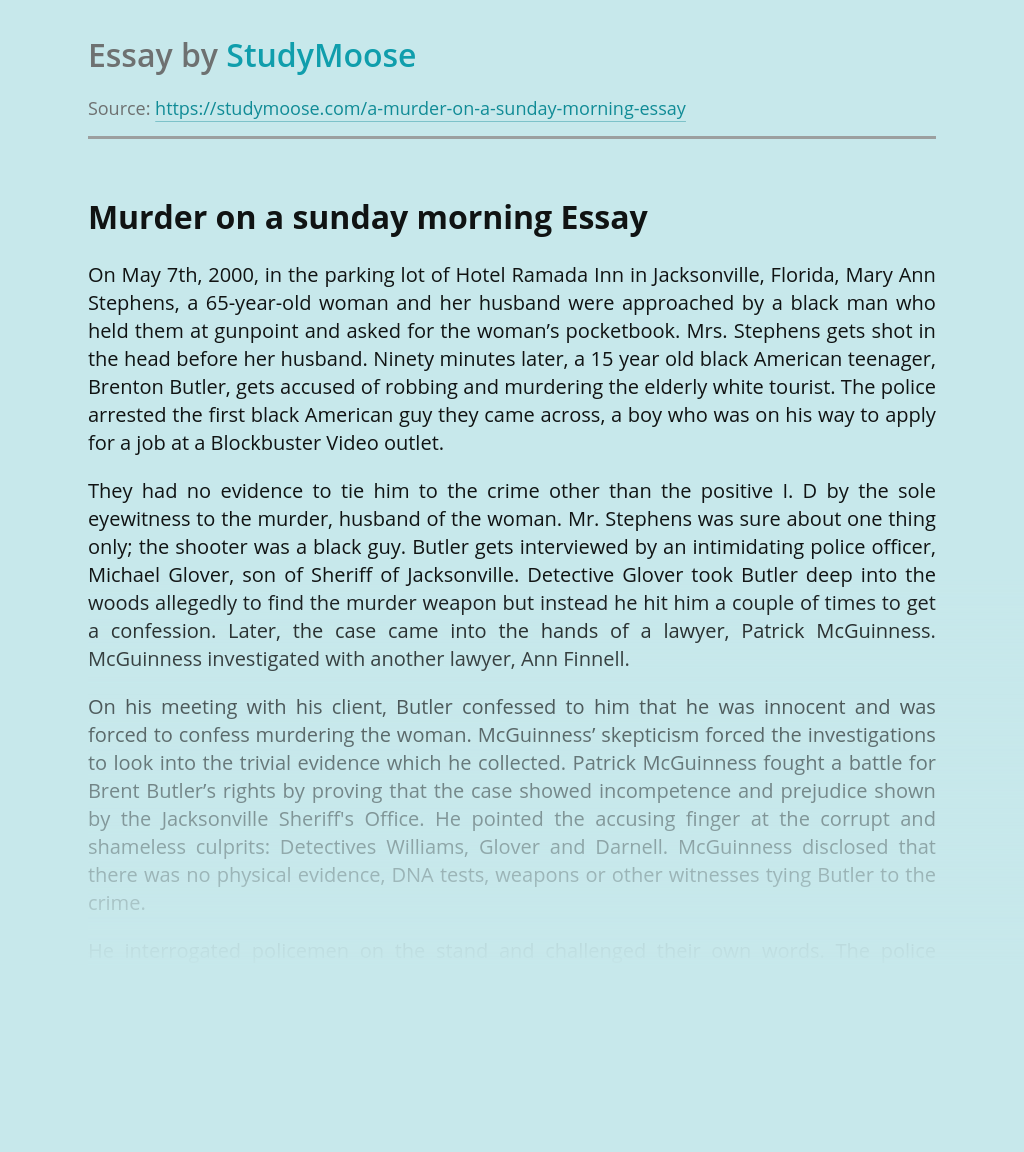 Turn in your highest-quality paper
Get a qualified writer to help you with
“ Murder on a sunday morning ”
Get high-quality paper
Helping students since 2015
Stay Safe, Stay Original