1. The author’s main thesis in setting up this book is that many drinks have built and brought together human history in to what we know about it. 2. The fluids that are mentioned in the book are vital because each one played a role in many areas of history and they are a crucial part of creating a certain period of history. “Beer in Mesopotamia and Egypt”

1. The discovery of beer is linked to the growth of the first civilizations because in both cultures of Mesopotamia and Egypt, beer was the main drink.

Don't use plagiarized sources. Get your custom essay on
“ A History of the World in 6 Glasses Study Questions ”
Get custom paper
NEW! smart matching with writer

It was consumed by everyone and was known as the defining drink of both of the first great civilizations. 2. The history of beer tells us that those people were intelligent enough to understand that they needed another beverage to consume rather than water. They most likely knew that some of the water that was available to them wasn’t all that safe and good enough to drink. 3. The author uses history records, writings and pictures as sources used to gather information about the use of beer.

4. Beer was used as a form of payment or trade for some of the workers who built the pyramids; they were paid in loaves of bread along with beer. It was also used in religious forms such as prayers. 5. According to Standage beer “civilized” man because it was an important beverage that helped them become modern. Beer is linked to farming since cereal grains are required to make beer which started a certain lifestyle.

“Wine in Greece and Rome”

1. The use of wine is different than that of beer because the ancient civilizations drank beer as just a social drink while the Greek culture drank wine in a religious manner. 2. Wine was used as a way to show their social status by the Greeks. 3. Wine developed into a form of a status symbol when they found out supposedly how wine was made, through the gods. After that they suggested only people worthy of the gods should be able to drink wine. 4. Wine was consumed in an elegant manner through a bowl made out of gold, this tells us that the ancient Greek culture was into the lifestyle of their people and liked to show their wealth. 5. In Rome wine was seen as a necessity by the people and they felt like they needed to drink it while in Greece it was just seen as a leisure drink. 6. Wine is
a part of a Catholic ritual where wine symbolizes the blood of Jesus Christ and Christianity began in the Roman Empire and became an important force in Europe after the change between Emperor Constantine. Wine was also uses for medical purposes as a pain killer. “Spirits in the Colonial Period”

1. The origin of distilled spirits came from the Arabs.
2. The connection between spirits and colonization is that, spirits became an economic good of great importance that with their taxation and control became matters of high political importance and helped determine the course of history. 3. The production of spirits is connected to slavery because the African slavers who supplied the Europeans with slaves, most valued spirits as a trade offer. The African slavers accepted a wide range of products in exchange but it was known that the spirits played as a main role in the trade for slaves. 4. Spirits were used as rewards to the slaves on the ship for being more helpful and cleaning. It was also used as a type of medicine used for diseases throughout the seas. 5. Spirits was an important fundamental in Colonial America because it was used for almost everything. To rural people it was used as currency and to others it was used to survive. The drink was known to be the best of its kind, which is why most people preferred it during trades. 6. Once the Molasses Act was passed in 1733, Rum began to play a role in the American Revolution. Since the Molasses Act wasn’t strongly enforced in the beginning, causing the colonist to smuggle it, British Government decided to strengthen the Act. Americans were not in favor of the new law and rebelled with the cry of “no taxation without representation.” “Coffee in the Age of Reason”

1. Coffee originated in the Arab world. Although there are many legends to how it was discovered, no one is so certain to how much of it is true. The popularity of coffee-drinking was first seen in Yemen during the mid-fifteenth century. 2. Coffeehouses became an important part of the history of the drink. Even though now in the modern world coffeehouses are seen everywhere you go, back in the days coffeehouses went through a lot of judgment. They became prohibited by Muhammad and went through legal matters in Mecca. Coffee didn’t stop there and began to move west conquering Europe. 3. Coffee influenced a new age of scientific learning and rational
thought because it was a sober drink. People that drank wine, beer or spirits were less likely to do anything while sober people were able to think clearly and the coffeehouses provided education and self improvement within society. 4. Coffee was used to start the day off alert and awake so they can get work done while the previous drinks such as wine and beer were consumed to be relaxed and intoxicate the person. 5. The Scientific Revolution and Enlightenment was a sharp break from the past because during that period of time people would drink coffee instead of an alcoholic beverage. It was a sober drink so it would let people be able to think more clearly rather than be intoxicated. It was a big change from the way people were living before it. “Tea and the British Empire”

1. Tea first became a mainstream drink in Asia by the fourth century CE and during the late eighteenth century in Europe. 2. In Europe only people that were able to afford tea drank it because it was known as an expensive beverage to have while in China and Japan everyone and anyone drank tea and used it for medical purposes. 3. Tea didn’t have as much success as coffee did because people weren’t aware of the uses of tea during the time and it wasn’t a regular part of their diet since they weren’t so familiar with the taste. 4.

5. Tea is an integral part of the Industrial Revolution because it was one of the main items being traded. 6. The connection between tea and politics is that Americans began to rebel against the British because they were taxing the tea without them knowing so that’s when the Boston Tea Party came into effect and the form of rebelling became a symbol of their freedom. 7. Tea was connected to the opium trade because it was an imbalance trade between China and British which caused the Opium war. 8.

“Coca-Cola and the Rise of America”
1. The very beginning of Coca-Cola’s origin begins with a brewery in Leeds by a scientist, Joseph Priestly in 1767. Joseph Priestly was amused by the gas known as “fixed air” which was proven to be carbon dioxide and discovered the soda water. Then in 1886 it was said that a pharmacist named John Pemberton created the drink by accident while trying to make a cure for
headaches. 2. Coca-Cola was used medically to cure all nervous affections such as headaches, Neuralgia and Hysteria. The Coca plant and the Kola nut were both alike in effects and was said to act as caffeine and suppress the appetite. 3. Coca-Cola had a relationship with World War II because the war made the drink be known globally. During the War the company would send out Coca-Cola to the soldiers to refresh them with a non intoxicating beverage. 4. Communist viewed Coca-Cola as a symbol that stood everything for America; freedom, democracy, and free-market capitalism. They had the idea that the drink stands for everything that was seen wrong with capitalism. 5. “Globalization in a Bottle” is summed up to be Coca-Cola representing a trend towards a single global market place because of how much it is known around the world. Epilogue- “Back to the Source”

1. I do agree with Standage’s argument because water whether its in a bottle or just regular tap water is the same thing. People will still need it to be able to survive. 2. I think water will be the most influential beverage in shaping the global situation for the years to come because almost every beverage created contains some type of water in it. Water, while it can become contaminated, is still the healthiest drink.

A History of the World in 6 Glasses Study Questions. (2016, Mar 19). Retrieved from https://studymoose.com/a-history-of-the-world-in-6-glasses-study-questions-essay 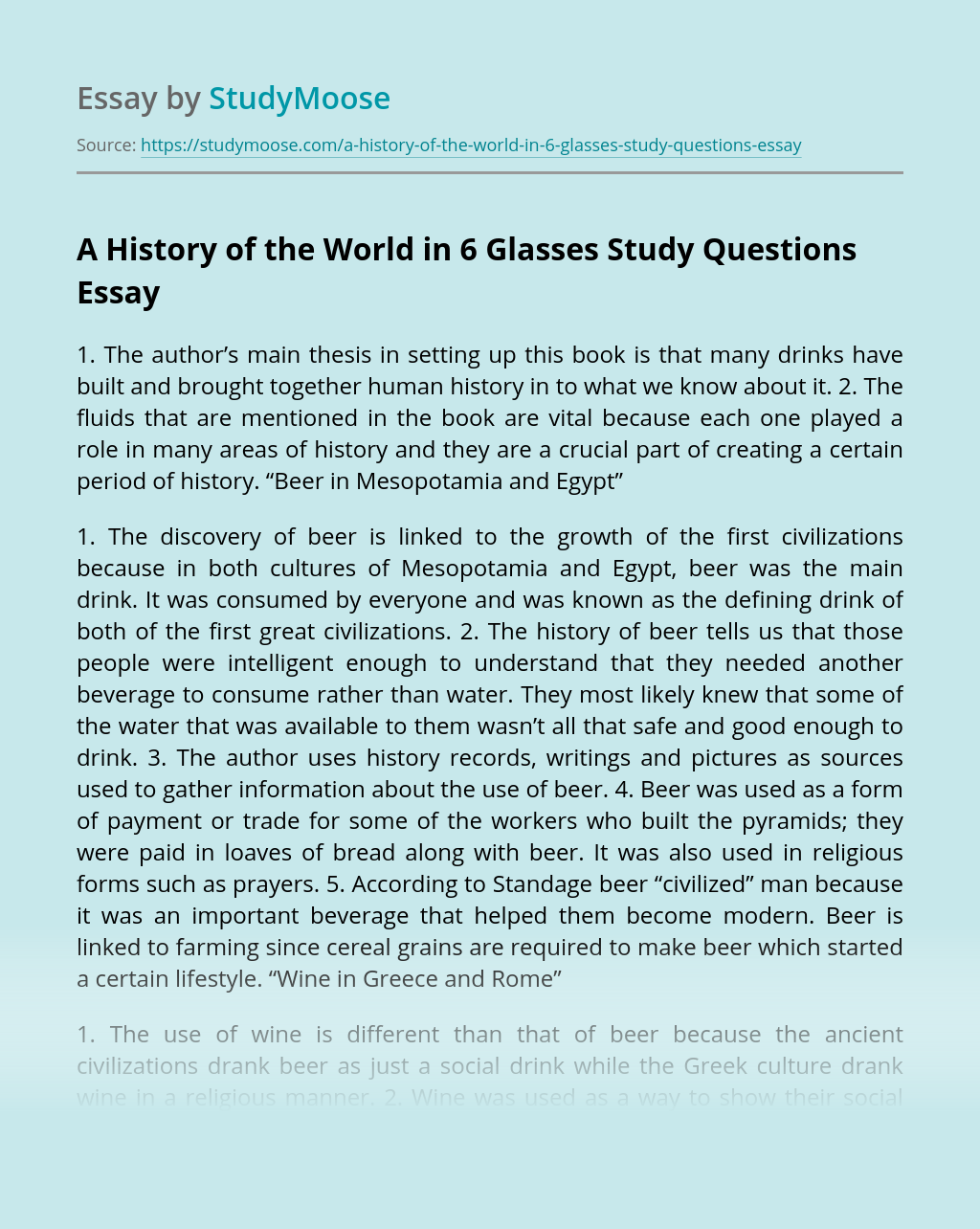