A FIgg For The Oh Death

Edward Taylor was a pastor, physician and an American poet. He lived between 1642 and 1729; a time of devastating living conditions. At this time America was still a colony of Britain a fact that increased human problems (Jerrett, 384). Edward, as everyone else, lived in terror of his life and home being in danger. Yet, during these terrifying moments, he drafted poetry one of them being _A fig for thee oh! Death._ Being a strong believer of Christian faith, Edward was determined to ascertain his belief of life after death.

Just like most of his poem, “_A fig for thee oh! Death”_ aimed at criticizing death. The analysis in the succeeding sections focuses on the poem in details paying special attention to his description and attitude towards death. In addition, an analysis is provided concerning Edward’s central message, which was firmly founded in his unending faith in God.

The poem’s title insinuates that the main idea was basically focused on the death phenomenon.

However, perhaps it is possible to derive a different meaning from the manner Taylor addresses the subject matter. In the poem, he vows vehemently his lack of confrontation to save his life, his body, from cruelty of passing away, for God protect his soul (Jerrett, 386). Accordingly, it can be concluded that Edward attempted to prove that there was notable disparity between soul and body. At the same time, he also shows his attempt to reconcile the huge gap between body and soul. From the start of the poem, the poet creates two edges that form a man, the human Saul and body, “_Kernel….

Death is embodied as a ghastly monster that is a man-eater, characterized by terrible “_Ghastly eyes….bare bones_.” Its attempt to destroy human body does not scare Taylor. He adds that the soul is safeguarded by the Almighty God “_its heavenly Kernel’s box abides most safe.”(Taylor_ 306). It can be noted that the speaker is eager to abandon the body and that is why he compares it to the body of a temptress, a hedonist. Thus the central idea of the poem swings from contemplation of natural death, to the mortal body which is portrayed as a liability to the speaker (Jerrett, 389).

Moreover, the narrator looks at death as a savior, a weapon strong enough to conquer the evil. Indeed, he considered death the wiles and temptations of the body. Therefore, he suggests that it the monster should be welcomed as destroyer of human body and not the soul. In fact, he is fully confident that the only thing that prevents him from going to heaven and from realizing grace is the fresh (Jerrett, 391). The poet is also confident that disposal of the fresh through death will mark the beginning of the judgment day, ” _Till she hath slept out quite her fatal sleep. When the last cock shall crow the last day in…_” (Taylor 307). Thereafter, the destroyed, imprisoned and ultimately faulty body will accompany the soul to heaven.

Death changes from being a monster to a necessary element crucial in attaining grace of God. However, later on perspective of the speaker changes where he admonish death for killing the fresh so slowly thereby keeping the narrator from ascending to heaven. He says “_is this the worst thy terror then canst. Why then should this grimace at me terrify?”_(Taylor 307)

The poem helped Taylor to resolve the scuffle of the soul and the body. He manages to illustrate how the human body can offer numerous temptations and still allow a person to go to heaven. The main message that Edward is putting across is that there is life after death. Therefore he feels that people should not fear death because the savior (Jesus Christ) also died, resurrected and ascended to heaven. 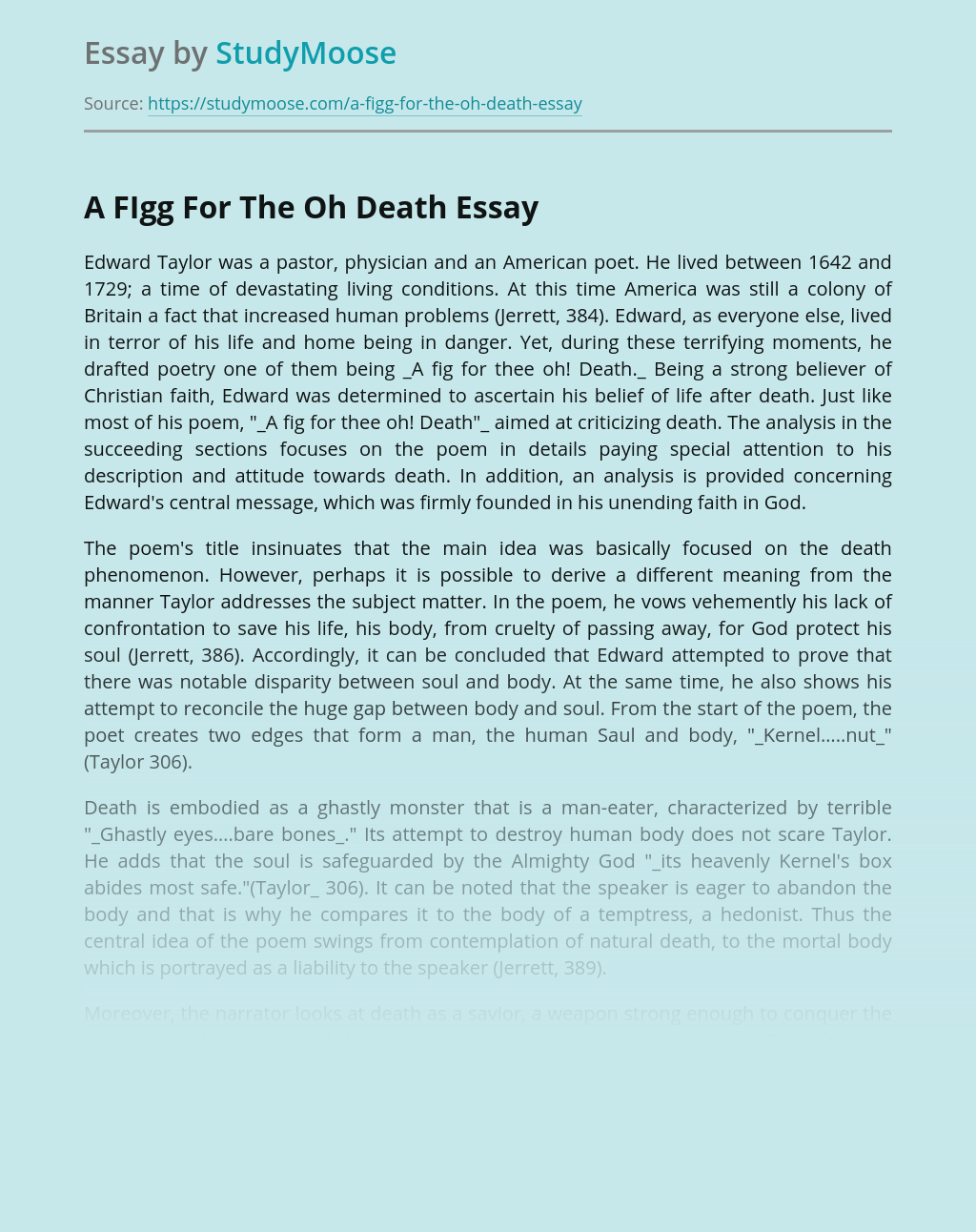 Don’t waste time
Get a verified writer to help you with A FIgg For The Oh Death
Hire verified writer
$35.80 for a 2-page paper
Stay Safe, Stay Original