Torvald and Nora in "A Doll House"

These are comments that Torvald makes once he has found out about Nora’s secret and has been told that no further action will be taken against him. This is where the largest section of tension and atmosphere created by his character comes into play, because you realise that this man does not have the faintest idea of what his wife has done for him or why she did it. Now as the reader, we know what Nora has done and what she has been going through.

Don't use plagiarized sources. Get your custom essay on
“ Torvald and Nora in “A Doll House” ”
Get custom paper
NEW! smart matching with writer

We start to get irritated with Torvald and think ‘if he just shut up for a minute and let her explain then surely he wouldn’t be so angry!

‘ Nora (the central character), Torvald’s wife brings most of the atmosphere and tension to the play. However unlike her husband it is through several different characteristics. Nora could be described as a crafty woman. It is not necessarily in a negative sense; but she has to be because she is a woman living in the Victorian period.

Nora does not have many rights (as a consequence of the time she is living in) and, as such, anything she wants whether it is for her self or not, she has to get through Torvald.

The atmosphere created in the play is evident in a number of ways. One of which would be the way she has to plot all the time to get anywhere/anything “And so he shall, Kristine. Just leave things to me.

I’ll bring it up so cleverly… I’ll think up something to put him in a good mood. ” Another would be the way she has to dance around and be “cute” in order to get what she wants. ” Please, if only you would let it have its way, I do what it wants, It’d scampered about and do all sorts of marvellous tricks.

” Torvald treats Nora almost as if she were a toy, he believes that women are not much more than decorations. Women are wives and mothers, nothing else. This forces Nora to pretend to be something she is not She has to pretend to be slightly dim, ignorant to the ways of the world and very childlike/helpless when in fact she is a very smart woman. Nora has to be (falsely) coy when she wants to say something, as she does not have the kind of relationship where she can be direct about what she wants.

The tension and atmosphere is brought to the play by the complete feeling that this is a fake marriage. The secret that Nora has obviously brings tension and atmosphere to the play, because the reader knows that Nora is frequently lying to her husband and that she is constantly looking over her shoulder. Nora forged her father’s signature; so that she could get a loan to take Torvald away as he was very sick. Torvald does not know this and Nora knows that Torvald would not accept the news very well.

The reader begins to like Nora as you know she means well, we also feel bad that Nora has to worry about her secret coming to the open, and that from that one secret so many other lies have come. The Helmers’ (Torvald and Nora) relationship is full of tension and atmosphere. The years of Nora pretending to be a different kind of woman, have had a corrosive effect on the relationship, the shine has gone. This brings an atmosphere of doom around the marriage. Their marriage has developed over the years into a slightly incestuous relationship.

Torvald treats Nora as a parent would treat a child and in turn she responds by behaving like a child. Nora has learned that in order to get what she wants she has to pretend to be dim, this is really a prime example of Nora’s intelligence. She is using her knowledge of her husband’s attitude to women to get what she wants. I found this rather uncomfortable, as it did not feel like a fully formed adult relationship. It reminded me of the kind of scandalous story I would read in a modern newspaper. It created atmosphere because reading it I got a sense of an unhealthy relationship, how could people spend their lives living this way? 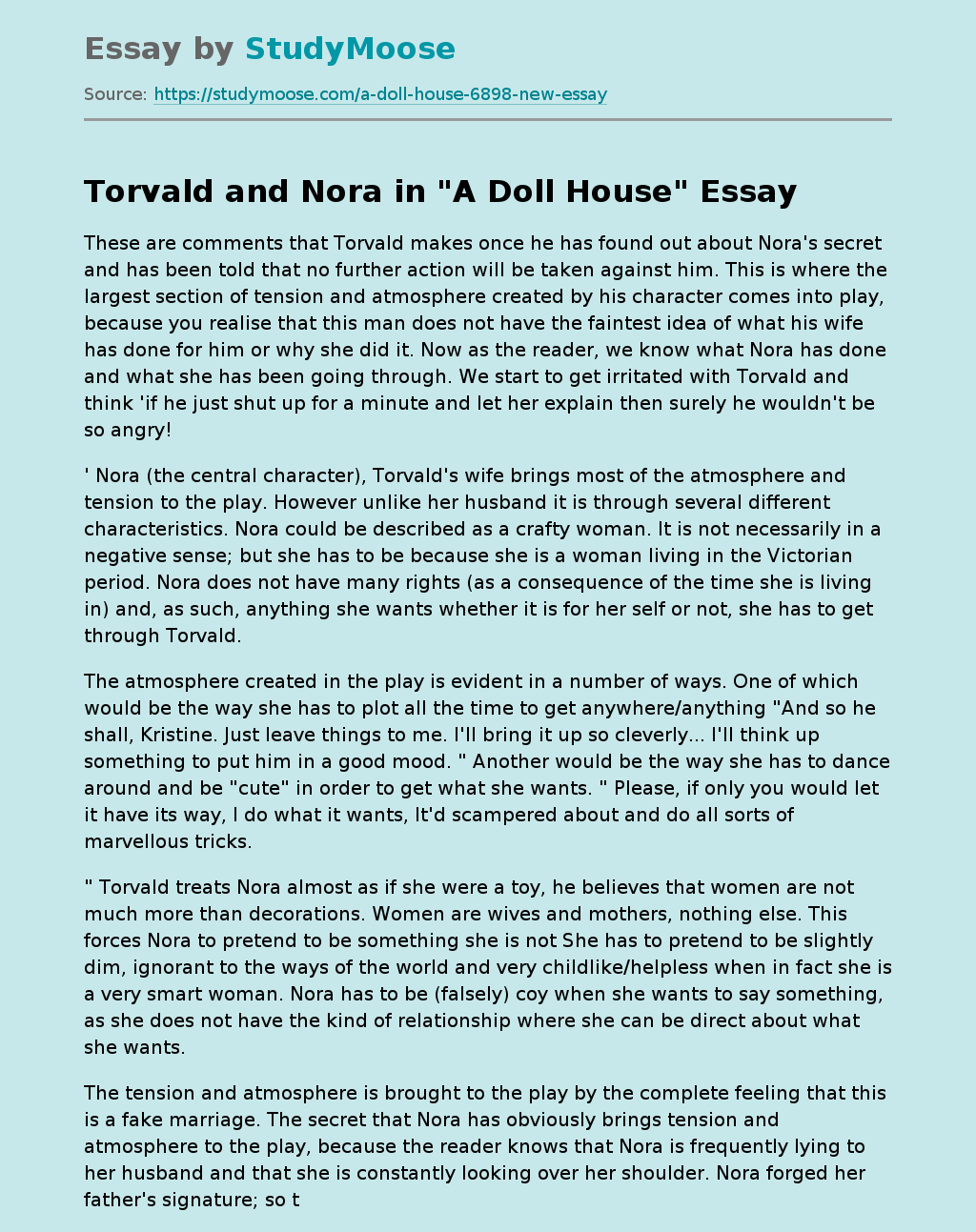