Nora’s first job is an opening of a short story from an annual that has been published for girls. As the story is in a book that is aimed at girls. The language and the writing style would have been created to make the book easier to read for the audience. The writer would have to write about things that girls are going to find interesting otherwise they are not going to sell lots of their books. Throughout the texts many linguistic methods have been used.

This could mean that the girl was shouting at Nora and then this might have come across harshly towards her and cause the other girl to feel more powerful than the other.

As the phrase would have been said from a girl, it would have sounded as if she was being catty and that there might not have been a problem. Sometimes women are insulted by other people. This can cause women to become reclusive and can stop them from being themselves. In the short story Norah’s first job we can see that graphology has been used.

The most important thing that graphology can show is what women and men are perceived as and how they are meant to look.in this story there is a picture of a woman who is picking out clothes. The clothes seem to be dresses which could indicate the fact that women are supposed to wear dresses and that they are all meant to dress the same.

The woman in the image could possibly be Norah. We can infer this from the fact that she is trying to get a job at a shop where they sell women clothes and dresses. By having an image on the page people are more likely going to pick up the book and read it. Young girls especially are going to find the images intriguing and this can then make them want to carry on reading the story. The sentence types play a huge role in short stories. If the lengths of the sentences are too long then people are going to get bored and stop reading the book. Youngsters especially are going to see a whole page of writing that is line after line and they are going to then not want to read the book. There has been a lot of use of adverbs, this could mean that the writer might have wanted to do this in order to portray the fact that women are often the quiet ones.

For example in this text the adverb carefully has been used. This could infer to us that women are too carefully and that the woman who is featured in this story is going to be portrayed as a careful person. Another adverb that has been used distinctly. This might have been used to ensure that the women are the ones that usually separate themselves from others and they are the emotional ones who exaggerate everything. Some people would say that women in this story seem to be controlling of all situations. We can see this in the text when one of the women end up saying that all the staff are ill and that she also feels so ill. This might be the reason as to why the exclamation mark has been used in order to show that sometimes women end up exaggerative every situation. Personal pronouns have been used throughout this text.

The fact that when the girls are having a conversation neither of their names are hardly mentions they are always referred to as ‘you’. This might have been done to show that women are not as important as men. This might be because the man who is mentioned in the story usually has his name when he is brought into the story. Whenever there is an argument going on in the story again it is always the use of personal pronouns. The text seems to be formal as they are applying for a job, even though this is happening the text still seems to be interesting. From having the story laid out on an easy read level this will mean that younger people will also be able to read the story. 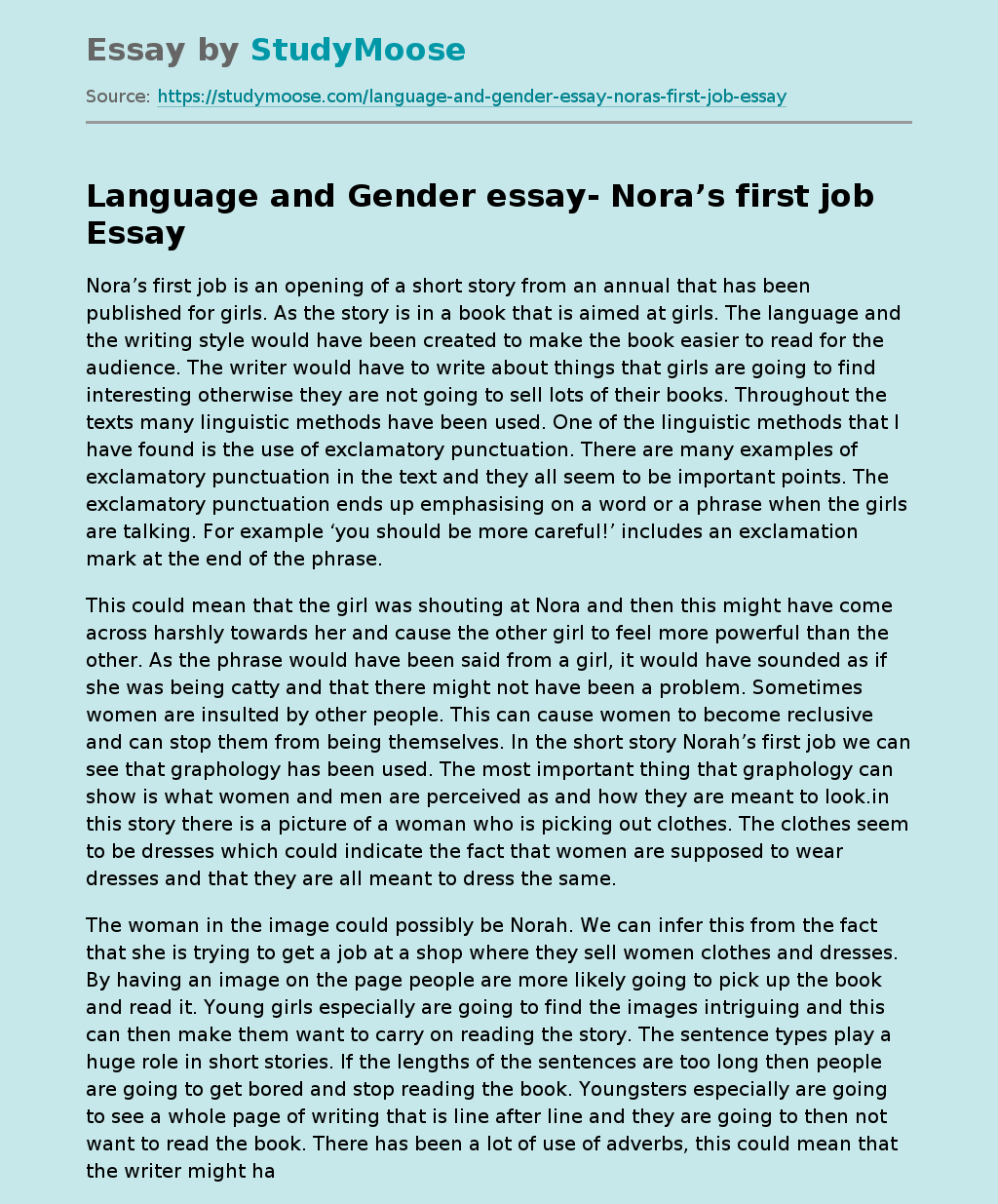