A Description of the Equality of Men and Women

Jean-Jacques Rousseau is often credited with a view of human equality and was largely concerned with “equality among men.” However, despite making clear in his writings that there exist obvious inequalities between the sexes, he recognized the separation of traditional gender roles and claimed that they were necessary. In this way, he proposed basic human rights for all men while at the same time excluding women. He claims that while women both desire and need men, men do not need women, and so, they only desire them.

Don't use plagiarized sources. Get your custom essay on
“ A Description of the Equality of Men and Women ”
Get custom paper
NEW! smart matching with writer

In other words, Rousseau believed that women were made specifically to please men, and for this reason, he believed that women were most important to society only as wives and mothers. Therefore, the concept of women’s education beyond that which would make them suitable domestic partners was totally inconceivable to Rousseau. He went on to describe his methods for education in the Emile, the story of a boy’s upbringing in the natural state, but it was met with much resistance by philosophers like Mary Wollstonecraft who deplored the neglect of Emile’s perfect wife, Sophie.

However, in this paper, I suggest that Rousseau’s neglect of Sophie was ultimately intentional and stands to represent his views on women and their education.

The Enlightenment was an eighteenth century movement that valued reason and order as well as suggested that people were very rational. However, many reacted against this movement, arguing that this view of logic and reason missed a large piece of what it means to be human.

As such, Romanticism, as the counter-movement came to be called, emphasized emotion and passion as well as asserted individual originality all the while idealizing nature both in the sense of the natural world and human nature. Nonetheless, the works of Genevan philosopher, Jean-Jacques Rousseau, quite easily captured part of the Romantic mentality. He found that it is not in one’s best interest to merely accept the status quo, and so, it is necessary for individuals to think for themselves and think as individuals.

Jean-Jacques Rousseau is largely considered the father of Romanticism and many of his treatises and novels inspired leaders of the French Revolution. Born in 1712 in Geneva, Switzerland, Rousseau was raised by his father to believe in an extremely glorious image of his homeland. However, he later fled because he desired a life of adventure and converted to the Roman Catholic faith. He spent much of his time studying and writing music, becoming a famous composer, but he was also a political philosopher and an author. His works were extremely influential, as he propelled political and ethical thinking to new heights. His reforms revolutionized taste and had a profound impact on people’s way of life. In particular, he taught parents to take a new interest in their children and to educate them differently. He advocated for expression of emotion and opened people’s eyes to the beauties of nature.

Rousseau’s view of nature was central to his political philosophies. In contrast to what had been argued by philosophers like Thomas Hobbes, Rousseau claimed that humans were originally healthy, happy, and free despite likely being solitary, and it was only when introduced to society that humans began to develop passions that generate failings. Rousseau remarks, “Everything is good as it comes from the hands of the Maker of the world but degenerates once it gets into the hands of man.” In other words, humans in what Rousseau called the “state of nature” were unspoiled. This is because individuals start out perfect in the world with no knowledge of vice and error, but as they encounter civilization, they become increasingly corrupt. When considering this, Rousseau takes interest in understanding how education might need to be altered from the norm in order to confront the issue of progress as a corrupting force. Therefore, at the heart of Rousseau’s theory on education was that it should be “natural.” By this, Rousseau means that educators are to stay out of the way and leave room for children to develop their own ideas and interests. However, this idea is really only reflected in Rousseau’s work when he thinks about young boys, as when he comes to discuss the education necessary for girls, he seems to see them in a much more conventional way as naturally obedient.

In 1762, Rousseau published the Emile, in which he idealized his ideas on education in the form of a novel-like essay. Described as a treatise on education, this text focuses on the upbringing of a young boy by a tutor who is given unconstrained authority over him. Placing himself in the story as a tutor, Rousseau educates a young boy named Emile until he reaches adulthood and finds his wife, Sophie. The basic argument, as described, by Rousseau is such that vice and error are only introduced by external agencies because are ultimately alien to a child’s natural understanding of the world. As such, the tutor works tirelessly to manipulate pressures that will work with nature and not against it. In this role, the tutor assists Emile in his gradual transformation from the “state of nature” into civil society. Overall, Rousseau attempts to convey that while nature is good, society is corrupt and that the task of the tutor is to turn savages into social beings. However, Rousseau makes clear towards the end of the work that what makes humans social is actually their compassion for others. He writes, “It is man’s weakness which makes him sociable; it is our common miseries which turn out hearts to humanity …” (221). This mechanism of compassion in conjunction with love is what constitutes the social, and so, when Rousseau creates Emile, he is well aware that he needs a mate, or a “helpmeet,” as he calls her.

A Description of the Equality of Men and Women. (2021, Dec 11). Retrieved from https://studymoose.com/a-description-of-the-equality-of-men-and-women-essay 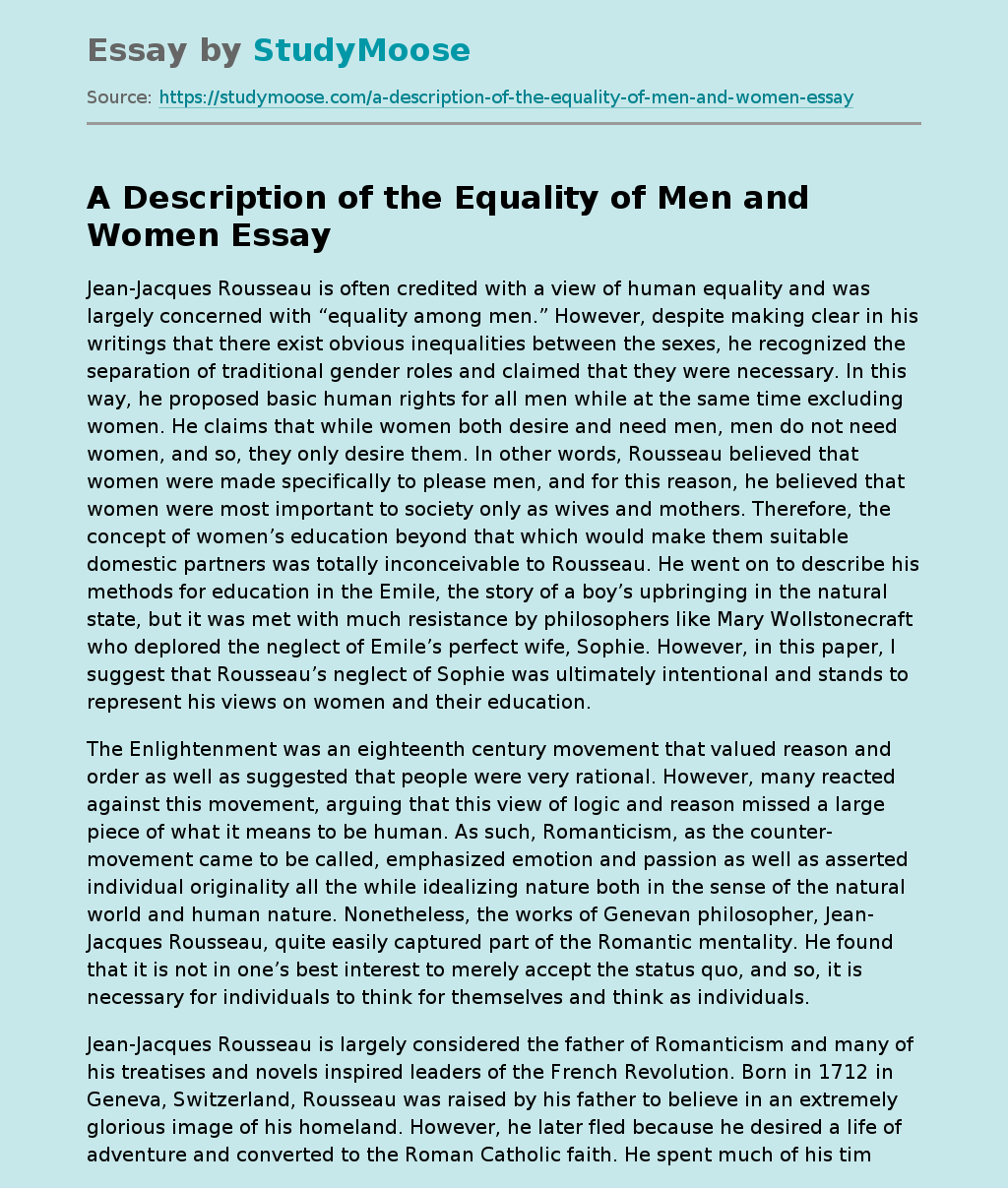