"A Case for Torture" by Michael Levin

“The Case for Torture” by Michael Levin, presents excellent justification for the use of torture in situations of extreme desperation. Levin gives great arguments for the use of torture through clever wording and great exemplification. In supplement to the already great argument, he provides potential counter-arguments and proves why they are invalid. It is made very clear that he believes that torture is morally mandatory and makes great effort to sway the opinion of readers, provided they keep an open mind.

Don't use plagiarized sources. Get your custom essay on
“ “A Case for Torture” by Michael Levin ”
Get custom paper
NEW! smart matching with writer

Levin presents a great argument and presents the ideas in an organized fashion, but as with many essays, it is not without flaw and could use some minor changes to make this great essay into a incredible essay.

The format of the introduction of Levin’s essay is somewhat unusual. It begins with a few powerful statements, but the very first statement violates a rule of literature, inclusion of an unsupported fact. Levin says,” It is generally assumed that torture is impermissible, a throwback to a more brutal age.

” Not only is the statement a generalization, he is saying that something is generally assumed, but he does not say whom it is assumed by. So who generally assumes it? It seems it is more of a mistake of wording because he is the one who is assuming that generally people think torture is wrong, therefore the essay should read that way because the last thing one should do is start off on the wrong foot.

The essay truly lacks any real lead-in or background.

The essay just jumps right into the real issues without introducing them or explaining why it was even written in the first place. The reason for the essay is not the real issue though. The issue is that it lacks background because it doesn’t appear that Levin is actually arguing against another point of view. Last I knew, an argument required two points of view to start with, but as I read the introduction it doesn’t seem he has an opponent to win favor over. Without question it is obvious that the paper is about torture, but the introduction does not introduce the main ideas as clearly as it should introduce them.

Upon reading the body of the essay, it also comes off as unfinished. The paragraphs in the essay do not seem to flow together, but rather jump from one point to the next. While the paragraphs may be about the same topic overall, the transition between minor points is somewhat abrupt and adds to the essay’s unfinished feel. Another point of interest is Levin’s inclusion of two subtitles; however, the subtitles are not complete. The first subtitle reads, “Death”, but the following paragraph does not discuss death.

With “Death” being the subtitle, it seems that’s what the paragraph would be about. The next and last subtitle reads, “Idealism”, and accordingly that is what the following paragraph is about, but why does that paragraph gets a subtitle and the previous do not is a mystery because they are all about something different as they should be. It seems to be another oversight that also adds to the essay’s unfinished quality.

Though the essay has its flaws, it is not without strong points. Levin’s great use of examples through hypothetical situations really brings the reader in and aids in his quest to change their point of view. The examples themselves do not make the essay; however, it’s clear they are greatly assisted by the excellent use of vocabulary and clever wording. Levin does a great job of using powerful words, it makes the essay seem more credible and creates a feeling that the writer really knows what he’s talking about. Why that may or may not be the case, it can be said that Levin really knows how to write a good persuasive argument; however, his oversights deduct from what could be an incredible persuasive essay.

The overall impression of the essay was good. It seemed the argument itself was well though out, but the actual writing itself was what most needed work. Without a doubt, Levin’s essay presents some very valid facts and they are rather well supported in most cases; however, to make a strong argument you need support on every level. Not only do all the facts need to be organized and well developed, but the writing does as well. As previously stated, it is clear that Levin really knows how to write a good persuasive argument; however, his oversights deduct from what could be an incredible persuasive essay.

"A Case for Torture" by Michael Levin. (2016, Jul 21). Retrieved from https://studymoose.com/a-case-for-torture-by-michael-levin-essay 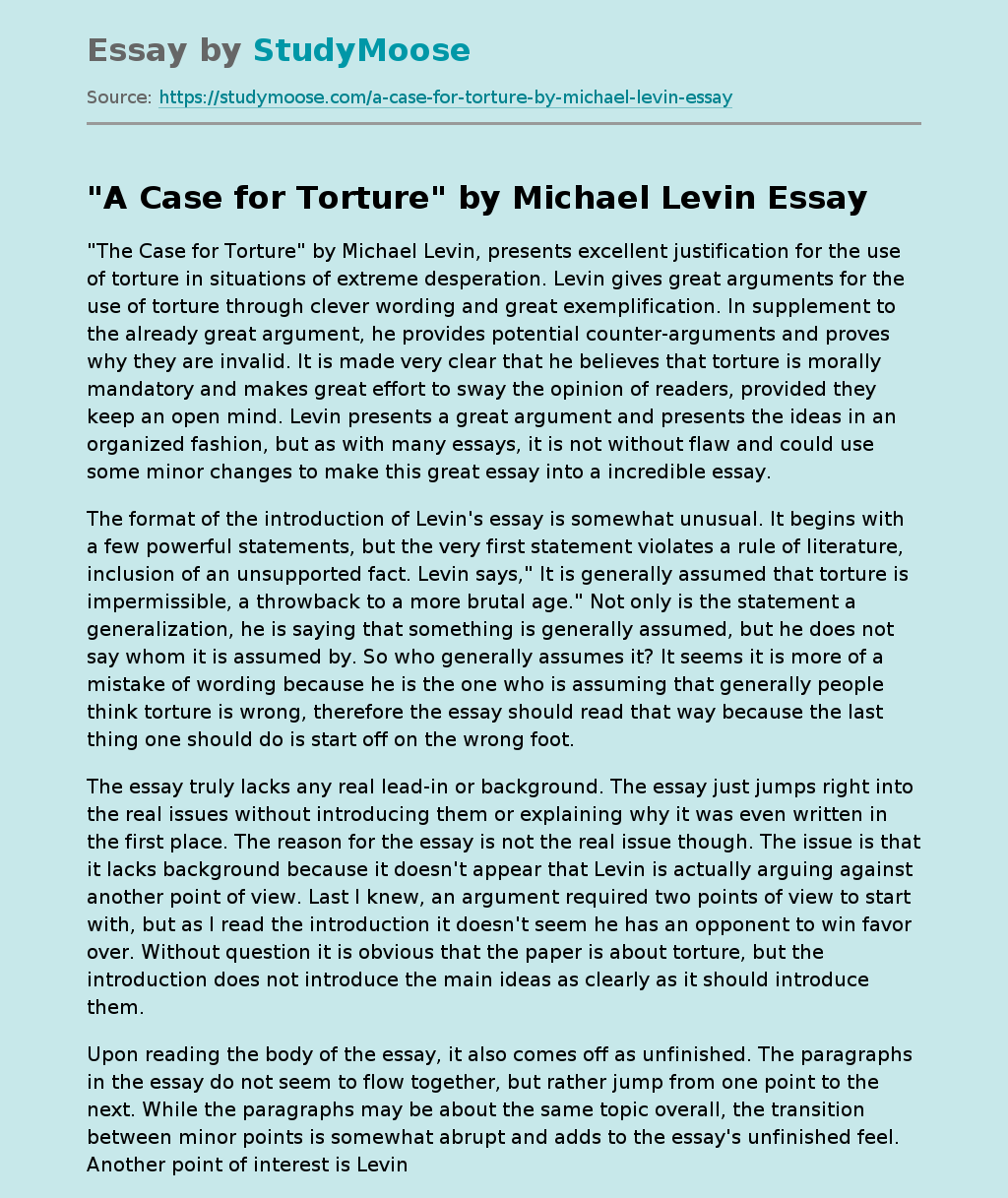