1491: The Americas Before Columbus

New research has emerged revealing that Indians had roamed &amp; utilized the great lands of the Americas long before any European ship landed on its coast in 1491. Therefore, a conflict lies in debates about whether or not Native Americans possessed a complex history before the arrival of Europeans. Like the author of 1491: New Revelations of The Americas Before Columbus Charles C. Mann, Archeologists and Historians have been working diligently to find a resolution to this conflict.

As a result, it is clear that Indians did posses some form of a history during the Pre-Columbian era because of accounts of Indian politics, beliefs, &amp; agriculture.

Don't use plagiarized sources. Get your custom essay on
“ 1491: The Americas Before Columbus ”
Get custom paper
NEW! smart matching with writer

Like found in Europe, political structures were evident in many Indian societies. In order to operate such a great empire, like the Inka Empire, a political system is required. This is evident as Mann states, “In 1491 The Inka ruled the greatest empire on earth. Bigger than Ming Dynasty China… Ivan the Great’s expanding Russia… Songhay in the Sahel or powerful Great Zimbabwe…

Ottoman Empire… The Triple alliance… bigger than any European state.

”(74) Also similar to other forms of government, corruption was present in Inka politics. For instance, an old Inka tale essentially states that after a chaotic war the presiding Inka murdered one of his sons so that the other could become Inka. Therefore, because of sometimes bias European and Indigenous accounts it is evident that political systems were evident in the Americas before 1491. Another implication that Native Americans were more than space takers can be found in their cultivation of the land.

Historians and others have often shared the common belief that when Europeans arrived in the “New Land”, they were encountering a pure and nourished gift from God. In contrast, newly found evidence, as explained in the book 1491, suggests that Native Americans exercised and maintained the land just as, or even better than, that of the Europeans. According to Mann, Native American groups such as the Mayans of Mesoamerica, The Inca of Peru, &amp; the eastern tribes of North America have altered American land in a plethora of ways. One of the major ways that Native Americans maintained American land was by starting forest fires.

These forest fires helped re-nourish the land, spark a new season of growth, and create a food supply for themselves and animals. Native Americans also exercised American land by farming many unique crops, such as maize and squash, during the Neolithic Revolution. Native American action’s in using American soil as a tool to build civilizations serves as a key factor in proving that they did create complex societies. Therefore a form of history was present in the Americas before the arrival of Europeans in the year 1491.

In addition, Native American ideas, religions, and philosophies provide an unexpected aspect into Pre-Columbian complex cultures. A common factor in all complex civilizations is the possession of beliefs. This is true because humans are unable to function without a sense of purpose. For example, one of the many beliefs debated in Native American cultures was the idea of life after death. In the book, Mann spotlights a poem written for a Mesoamerican founding figure that attempts to answer the question, “What happens when we die? ” Lines in the poem such as, “Like a painting, we will be erased” (138) further answer that puzzling question.

Also, evidence of Pre-Columbian art, such as mask and totem poles, are another example of advancements in Native American ideas. Their use of colors and many symbols have aided historians as they piece together the aspects of Native American life. Because of Native American art and their ability to think about ideas outside of their needs for survival it is obvious that a form of history was possessed. Although disputed, it is evident that Native Americans did have a history because of factors such as government, land cultivation, and advanced thinking.

This is significant because it disproves many previous beliefs about Native Americans during the Pre-Columbian era. Because of common misconceptions like “Holmberg’s Mistake”, details such as this have unfortunately been ignored until recent years. This new found information provides a new meaning to the term “American 1 / 3 History” and doesn’t solely focus on the ambitions of Europeans. Against For a plethora of years historians and archeologist have believed that Native Americans were simply naive space takers who resided in the sought after lands of The Americas. This claim has recently

caused a significant amount of conflict as new ideas and historical facts have arisen. These new ideas and facts have tried to derail historian’s common claim by investigating the history of Native Americans before the arrival of Europeans around the year 1491. In the book, “1491: New Revelations of the Americas before Columbus”, Charles C. Mann highlight this ongoing debate. Because Native Americans utilized little of their resources, had no concrete beliefs, and could not maintain their societies it is evident that Native Americans did not posses any form of significant history.

Native Americans did not occupy the mental capacity to utilize the abundance of resources that the great lands of the Americas offered them before the arrival of Europeans. For instance, one of the many ways archeologist and historians have justified their new beliefs is through the discovery of great mounds and other “manmade” physical features. However this idea cannot be true because in actuality, these “manmade” features are simply natural flood plain deposits that Native Americans altered through everyday wear and tear.

In addition, Mann analyzes the puzzlement of historians when it was revealed that Native Americans utilized the wheel for children’s toys but never thought about enlarging it for efficient human use. Also, Mann discusses Holmberg’s view that, “Crouched over meager campfires during the wet, buggy nights, the Siriono were living exemplars of primitive humankind-the “quintessence” of “man in the raw state of nature. ”(pg. 9) This statement once again proves the incompetence of America’s indigenous people. Thus, Native Americans did not harbor any history because of they were unable to exercise their resources in an advanced manner.

Another unfortunate factor of Native Americans that was outlined by Holmberg was their lack of beliefs. Without a set of concrete beliefs there is not a way to spread ideas and bring people together under a common goal. Because of this it would have been difficult for indigenous peoples to acquire a history. Evidence of this conflict can be found as Mann stated “The Siriono, Holmberg reported… [Had] almost no religion”. This shortage of important morals caused many Native Americans to gravitate towards anything that would ensure their survival.

For example, when Europeans did arrive Native Americans exercised little opposition to conversion when introduced to Christianity by Europeans. Since Native American’s only goal was to survive, there was little to be done in forming a functional belief system. For that reason it would have been virtually impossible for Native Americans shape an indicative history. Furthermore, out of the millions of indigenous people that populated the vast land of the Americas before 1491, only few of their civilizations thrived. A history cannot exist if there isn’t a civilization to record.

An example of the disintegration of Native American societies can be found in accounts of the Mayan Empire. Because of their lack of advancements the Maya were easily defeated by local disagreements. Not to mention, Mann states, “By about 900 A. D. , both Mutal and Kaan stood almost empty, along with dozens of other Maya cities. And soon even the few people who still lived there had forgotten their imperial glories. ”(pg. 280) Mann’s statement proves that when a civilization plummets, so does their history. For that reason and others it is apparent that it would be impossible for Native Americans to posses any real history.

Although disputed, it has become crystal clear that Native Americans did not have a significant history because of factors such as their inability to advance mentally and culturally, their lack of theorem, and their inability to sustain a complex society. This is important because it further proves numerous previous beliefs about the state of Native Americans during the Pre-Columbian era.

Because of the countless research by historians like Holmberg, details such as this have been taught to most Americans today. Moreover, this significant information provides immigrated 2 / 3 Americans with a sense of pride as they can be credited to advancing the Americas into what they have become during the modern era. Because of Native Americans lack of historical presence, it is right for American History to be mainly focused on the ambitions of the Europeans that altered America’s great land. Work Cited Mann, Charles C. 1491: New Revelations of the Americas before Columbus. New York: Knopf, 2005. Print. POWERED BY TCPDF (WWW. TCPDF. ORG). 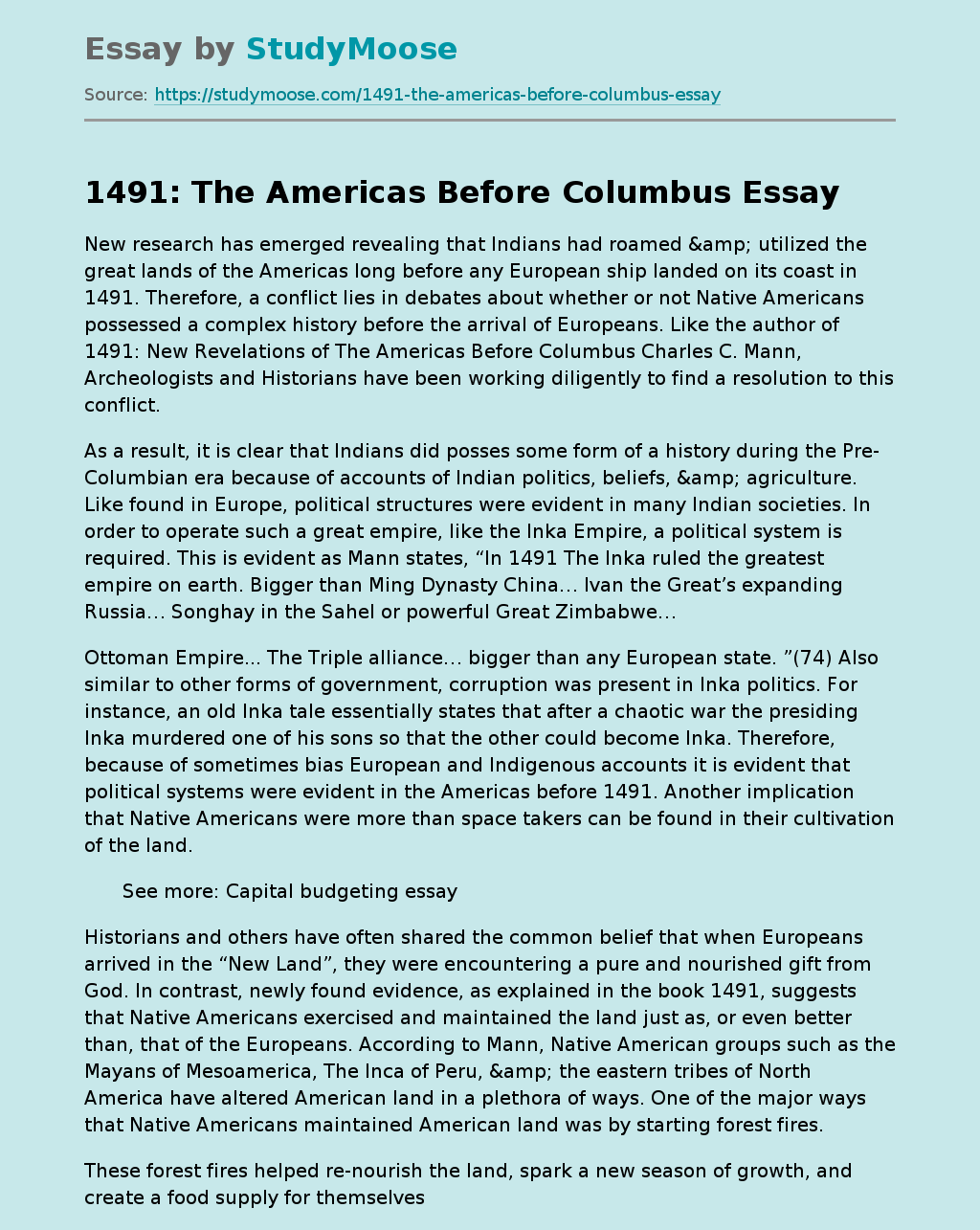