How Violent Was the Old West?

When people think about the Old West they usually think about Cowboys, murderers, and violence. But how violent was the Old West really? I think the people are often just exaggerating. One reason for that are probably all the western movies that represent it often in a wrong way. They show cowboys as men whose only job is to have gun fights with bad guys. Of course this isn’t true.

Know something about the history of the Old West respectively the Great Plains.

The Great planes were inhabited by Indian settlers. Their lifestyle was strongly influenced by the buffalos. They lived in tepees so that they can easily move after the buffalos. But in the mid 19th century white settlers moved westward through the Great Plains. For a long time the Great Plains were considered uninhabitable desert, only in about 1865 many settlers settled down there. Because of that the population of buffalos decreases by hunting and the local Indians were displaced in reserves.

Also Natives had different beliefs regards to religion and land ownership. All that together caused a big conflict between the Native Indians and the Europeans.

So much for the history. And now back to the question. First some facts about the towns in the Old West: As you can see in Document 2 and 3 the average homicide rate in Cattle Towns per year was only 3. Even if their population wasn’t more than 3,000, that is not a big number. On the other hand there were towns like Benton – shown in Document 4.

A town with an average of one murder a day. This town is a perfect example that shows that the Old West was violent. But not every town was like Benton, I think it was an exception. In Document 5 you can see an example of the law in western towns. It seems like all the things the Old West if popular for are forbidden. No carry of concealed weapons, no shooting or discharging of any fire-arm, no drunken behavior on public streets, no keeping of a house of prostitution and so on. Either the people just don’t follow the ordinances or all those things that the movies tell us aren’t true.

Let’s have a look at western plains. In Document 6 there is a report about the Battle of Beecher’s Island between elements of the US Army and several of the Plains Native American tribes in September 1868. The reasons for this battle were raids of homesteads where 99 white settlers were killed in summer and fall 1868. Ten men of the US Army died and 20 had been seriously wounded while 35 to 50 Indians were killed and at least 200 were wounded. This battle shows the violence of battles in the West.

Document 7 shows a comparison between the Indian Wars and other American wars. You can see that the Indian Wars were after the War of 1812 the less violent wars. In Document 9 they tell the truth about the fear of Indians and altercations with natives. From 150 diaries, journals, memoirs, and letters only 15 reported major difficulties. That supports my statement that most of the people exaggerated. Another support that the Old West wasn’t that violent is Document 10. It says that absent the two blood-lettings (Fetterman ambush and Little Big Horn Battle), combat deaths averaged about 17 per year or even fewer. In my view that is anything but violent.

To summarize I would say much of that what the people think about the Old West isn’t true. There are so many rumors and bias. Of course this was a hard time and many people died and you can’t say the Old West was harmless, but it wasn’t that violent either.

How Violent Was the Old West?. (2017, Jan 12). Retrieved from http://studymoose.com/how-violent-was-the-old-west-essay 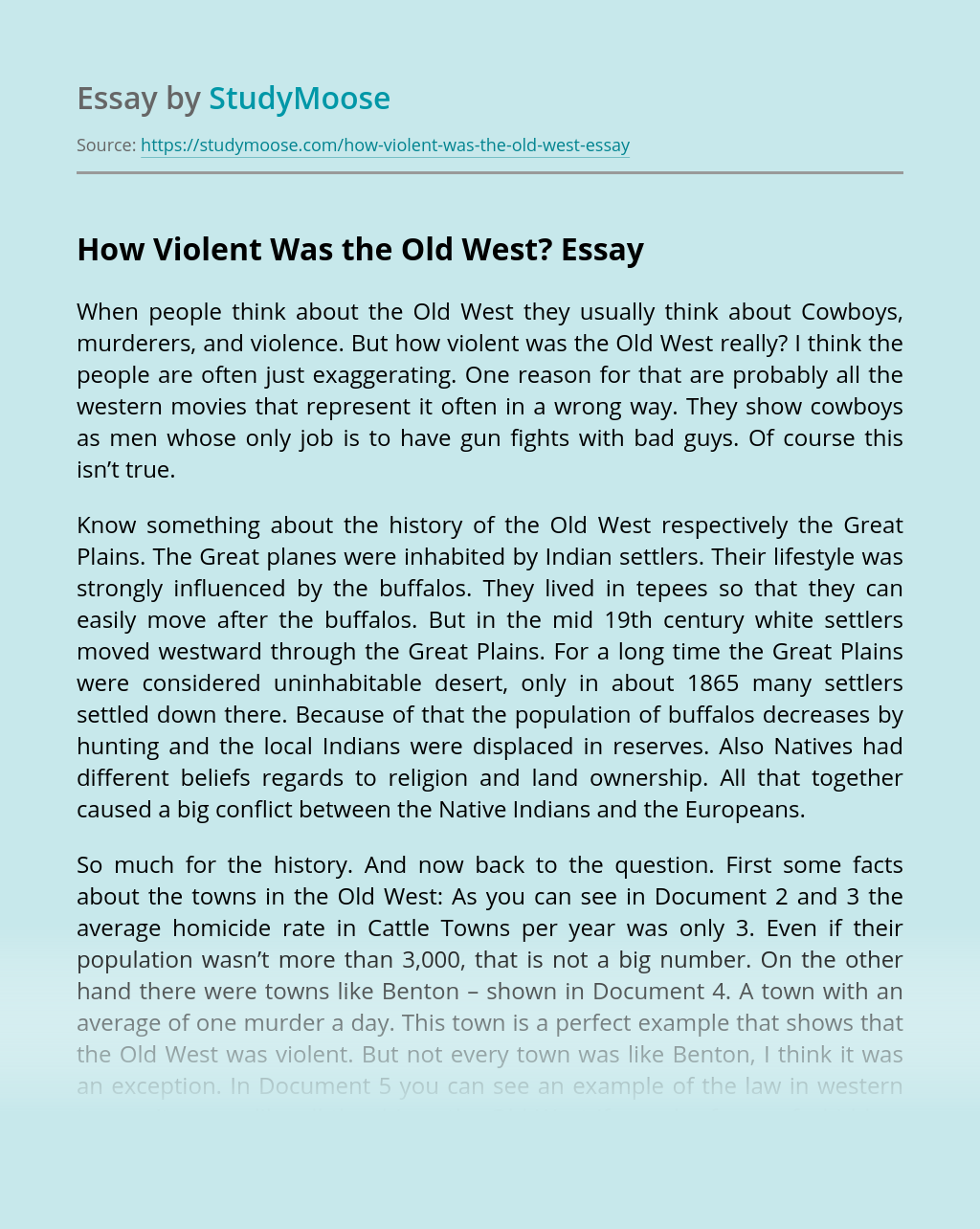 Don’t waste time
Get a verified writer to help you with How Violent Was the Old West?
Hire verified writer
$35.80 for a 2-page paper
Stay Safe, Stay Original