Education Has Been Considered As a Crucial Weapon

Education has been considered as a crucial weapon in fighting against poverty and necessary step in moving toward social, economic, political and technological development.

Education is considered as important tool, which plays a key role to social, economic and political development. It helps the society to change their environment for their benefit and enables its members to make wise use of valuable resources in their environment. This is particularly important to developing countries like Ethiopia, where illiteracy is high According to the 2007 National Population and Housing Census; there were 36,528,543 adults in Ethiopia between ages 15-55.

Don't use plagiarized sources. Get your custom essay on
“ Education Has Been Considered As a Crucial Weapon ”
Get custom paper
NEW! smart matching with writer

Education is a prerequisite for short and long-term economic growth. As a result, no country has achieved continuous and rapid economic growth without at least 40 percent of adults being able to read and write.

In Ethiopia, the history of Adult Education went back to the introduction of Christianity in the 4th century. (Sandhaas, Bernd, 2009). According to Sandhaas (2009) During the Imperial period, Adult Education came into the orbit of modern/secular nation building with the spontaneous beginnings of NFAE activities. During the first three decades of the twentieth century, most supply driven and other demand driven by government and non-government bodies and the government proclamation on adult literacy education was issued in 1955 and the Ministry of Education was made responsibly to coordinate the program (Sandhaas, 2009),(Haymanot, 2005.

After revolution, the government of this period made education a mass movement for national development, of course within a Socialist framework. Soon after taking power in 1974, the government mobilized about 60,000 senior secondary school students and their teachers as well as students and staff of tertiary level education institutions for a two-year rural service program to organize rural communities to promote the new ideology and manage their affairs. The Department of Adult Education was strengthened, and its role expanded. It became the Department of Adult and Continuing Education. The National Literacy Campaign (NLC) 1979-1991 became the flagship of the government. (Sandhaas, 2009)

In order to improve the adult education problems, the third Education Sustainable Development Program document underscores that like-skill based, work oriented and community-based adult education programs will be scaled-up. (MoE, 2004) This clearly indicates that adult education is contributing as an integral part of the implementation of different development policies, strategies and packages (agriculture and rural development, industrialization, health and packages related to youth and women) to achieve accelerated and sustained development to end poverty in the country is well recognized. (MoE, 2008) The government of Ethiopia has realized that illiteracy is both the cause and consequence of poverty. Hence, literacy is believed to be a potential tool to end poverty. (Haymanot T.2005.). Because of this, there is a strong attention given to adult education today by many countries than ever before. Adult literacy is basically needed for developmental purposes such as personal, social, economic and political. (Haymanot T.2005.)

Functional Adult Literacy in Ethiopia understands now as (a) the practice of reading, writing, and arithmetic put to some use (b) the acquisition of these skills to learn practical knowledge and skills useful for other aspects of life, such as agriculture, health, civic education, cultural education and so on; and (c) the third element, often attracting less attention, is the active participation of the learner which leads to empowerment and program sustainability. (Sandhaas, Bernd, 2009)

Research studies were done in the area of Adult education by different scholars like Abebayehu (2010) on factors affecting adult learners dropout from non-formal basic education in Addis Ababa, Amesalu Wolede (2009) on major challenges and opportunities of adult and lifelong learning of the Amhara regional state, Aster Tilahun (2010) an assessment of adult basic education among the people of Menja, Bizuayehu Bekele (2014) Factors that Influence the Enrolment and Implementation of Integrated Functional Adult Education, Abebe & etl (2017) Factors affecting the successful enrollment and participation of adult learners in kindo koysha woreda, Yilfashew S. & Yonas A (2016) Determinant of Adult Education Program: A Critical Analysis of Adult Education in Some Selected Training Centers of Eastern Regions, Kebede S.& Mohamedhusen H (2016).The Practices of Integrated Functional Adult Literacy Program in Ethiopia: The Case of Oromia. Almost all of the research intended to measure the magnitude and determinants of the problems. However, not try to look the importance of the sectoral networking among different sectors for the successful implementation of NAES.

The figure shows that adult enrolment in IEFA program increase from year to year. At national level 334410 adults were enrolled in the program currently the number reached 5,479,633. Each year the number of males exceeds that number of females in enrolment.

The figure indicates that the enrolment trend timely decrease in Dire Dawa which is opposite to the national level. Male enrolment has remained consistently higher than female every year.

Background of the Research Area

Dire Dawa was established in 1902; followed the introduction of Ethio- Djibouti railway. After Ethiopian People Republic Democratic Front (EPRDF) took power, Dire Dawa established as city administration under the jurisdiction of the federal government. Later in 2004, Dire Dawa became a chartered city by proclamation No. 416/2004. (EFDR, 2004)

Dire Dawa is also easy to access by any transportation like Ethio- Djibouti railway, international airport to flight to and from the city, and the road connects the capital city Addis Ababa to Djibouti pass through.

In education, there are a number of governments and non-government schools in Dire Dawa from Kinder Garten to college and university, but still literacy rate law that is 61.4% and adult literacy is 67.27%.(CSA. 2007)

The government of Ethiopia has given priority to promote education for all citizens by formal and non-formal method. It is clearly stated in the education and training policy (1994) as “One of the aims of education is to strengthen the individual’s and society’s problem-solving capacity, ability and culture starting from basic education and at all levels. Education enables man to identify harmful traditions and replace them by useful ones.” (Sandhaas, Bernd, 2009)

To achieve this objective, different efforts were made by the government including the development of National Adult Education Strategy. Adult education is initiated by understanding the needs of the beneficiaries and requires multi-sectoral activities. Adults will be encouraged to learn, only if they found the program related to their life, problem solving and brings about a change in their life style. (MoE, 2008)

The National Adult Education Strategy implemented through the ESDP IV put a special policy focus on IFAE. The IFAE two-year program for 15-60 year olds provides mother tongue reading, writing and arithmetic skills development integrated with practical knowledge and skills, for example in relation to family health, hygiene and sanitation. It is designed to make use of inputs from other development workers (agriculture, health, etc.) and builds on indigenous knowledge. It seeks to link numeracy and literacy skills to livelihoods and skills training in agriculture (including off-farm activities), health, civic and cultural education, etc. and requires delivery by various governmental and non-governmental service providers in multiple settings. (MoE, 2015)

In addition, Under ESDP IV and V the government of Ethiopian, ministry of education give great emphasize on adult education program. National Adult Education strategy (NAES) is also planned to emphasis on an integration of Literacy and life skills to enable learners to take informed decisions in their daily life and challenges various problems. Furthermore, it is planned to empower people to participate actively in ones affairs and benefits to generate income, fight against poverty and promote lifelong learning.

The main constraints and challenges identified during review of ESDP IV implementation include:

I. The planned institutional system, including the National Adult Education Board, was not fully developed, which resulted in continued fragmentation of adult education provision and meant that efficient implementation, coordination, linkages between the program and monitoring were difficult.

II. Not all regional adult education boards were operating effectively and lacked dedicated experts to lead the program, so most learning centers did not receive technical support.

III. In most regions, learning materials development was a challenge due to lack of budget, limited capacity among facilitators and facilitator trainers – and most did not have facilitators’ guides or handbooks for learners due to budget constraints or ineffective resource allocation by regions.

IV. Lack of a post-literacy strategy and curriculum framework may bring a relapse of illiteracy. (MoE,2015)

Most studies so far on Adult literacy/education were much focused of challenges and opportunities to implement the strategy, as far as the researcher assess related studies no more researches were conducted on the importance of effective sectoral Networking to implement NAES in the country in general, Dire Dawa in particular. Thus, the above- mentioned research gaps and researcher’s personal experience make insightfully to study the implementation of NAES and sectoral networking to implement the NAES in Dire Dawa Hence; the researcher believed that this research will be able to fill the existing gap in the area.

Education Has Been Considered As a Crucial Weapon. (2019, Dec 11). Retrieved from https://studymoose.com/11-backgroundeducation-has-been-considered-as-a-crucial-weapon-example-essay 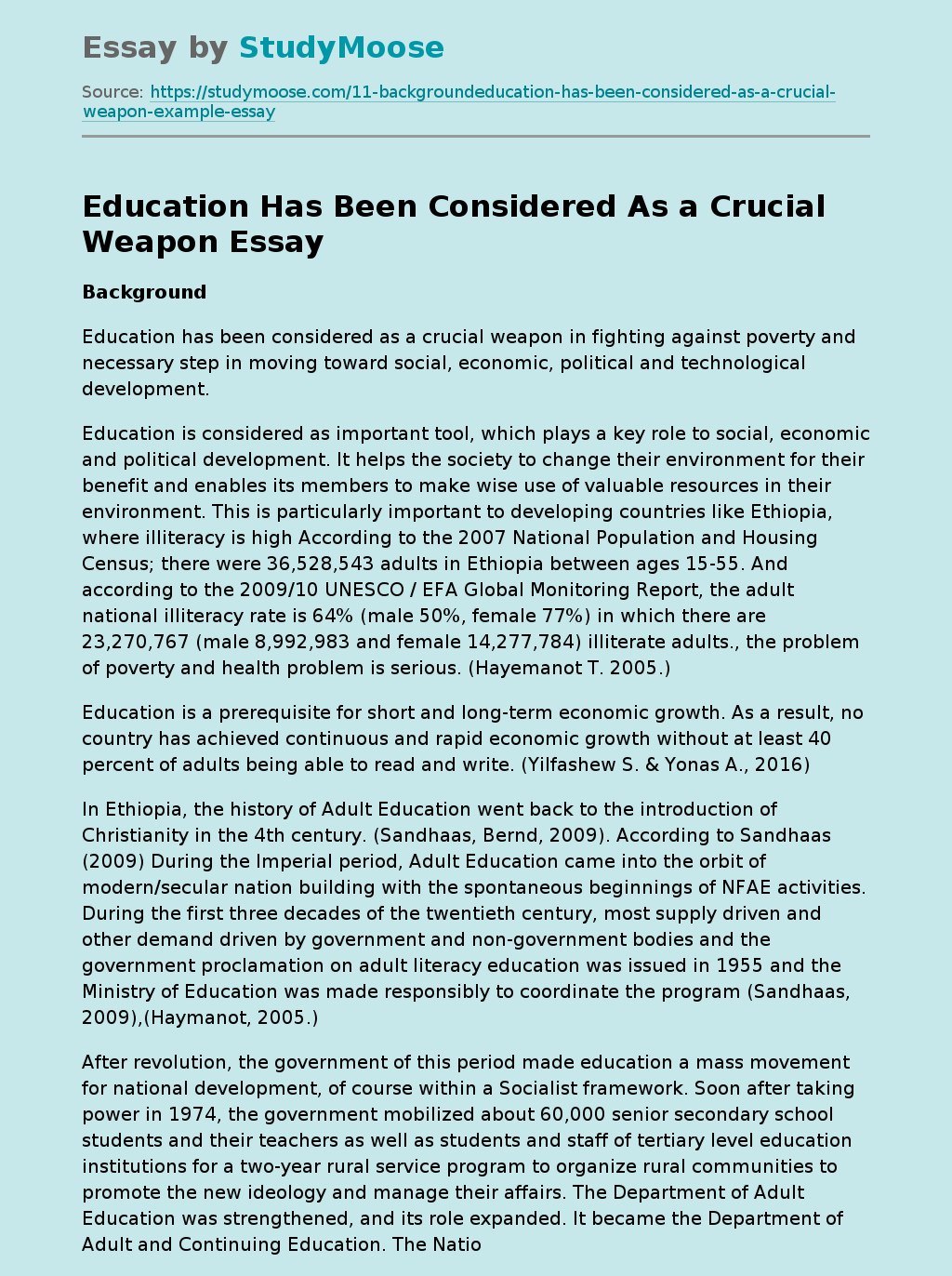