The Aim of the 10th Amendment

Over the years federal power was expanded through cases in the Supreme Court.

Don't use plagiarized sources. Get your custom essay on
“ The Aim of the 10th Amendment ”
Get custom paper
NEW! smart matching with writer

When the founding fathers wrote the Constitution, they encompassed the 10th amendment, which says “The powers delegated to the United States by the constitution, nor prohibited by it to the states, are reserved to the states respectively, of the people.” The problem with this statement is that it can be interpreted in different ways. The powers of the National government are usually the powers of congress, because they make the laws. The power of congress came from Article VI which states that the constitution is the “supreme law of the land” This means that the states must follow the constitution even if it conflicts with the state laws.

The constitution mentions very little about states’ rights so it can be hard sometimes to see the thin line between the national and states powers. The court has sometimes had to decide the exact interpretations of the tenth amendment to distinguish national and state power. In the year 1978 Congress passed the Alien and Sedition Acts which outlawed “any false, scandalous writing against the government of the United States.

Thomas Jefferson and James Madison believed that congress didn’t have this authority so they drafted the Kentucky and Virginia Resolution. They believed that the federal government had no right to exercise powers not specifically delegated to it and that should the federal government assume such powers, its acts under them would be void. They also felt the states had the right if it was “constitutional to pass such laws.

They used the philosophy of Nullification, which says that the States were supposed to interpret the Constitution, and acts that were considered unconstitutional would be nullified. John Marshall who was a Supreme Court chief justice wasn’t too fond of the idea of states’ rights. Marshall had mostly federalist views and his main role while being a chief justice was to strengthen the power of the National Government. His most known cases for trying to cut down states’ rights were McCulloch vs. Maryland and Gibbons vs. Ogden.

In the 1819 case of McCulloch vs. Maryland Marshall was responsible for settling the dispute of whether or not congress had the power to charter a bank and whether the state of Maryland had the power to tax that bank. Marshall determined that the Constitution grants the federal government the power indirectly to execute the Constitution’s definite powers. He also stated that the state’s actions may not obstruct valid constitutional exercises of power by the Federal government.

In the Gibbons vs. Ogden of 1824 Marshall had to decide whether New York had the right to create a steamboat monopoly on the Hudson River. In the case he focused on the Commerce Clause which he claimed that the federal government had the right to regulate commerce “among the several states.” His interpretation was that commerce meant any kind of business and that the national government could regulate business in the states.

The outcome of the Gibbons vs. Ogden case did not immediately give the national government the power to regulate business. Many people felt that the national government shouldn’t hold all the power and that the courts should make some decisions when it came to the regulation of business and the National Government. This led to a policy known as Laissez-Faire which allows businesses to operate with very little interference from the government. The National Government’s powers have been limited in cases such as Cooley v Board of Wardens of Port of Philadelphia in 1851 and Dred Scott v. Sanford.

In the issue was whether congress regulation on commerce deprived the states of all power to regulate pilots. The Supreme Court gave the states greater power to regulate commerce if local interests outweigh national interests. They felt that the decision of this subject should be left to the individual states. In the Dred Scott v Sanford case the questions was should slaves be considered citizens and being entitled to all of the privileges of being an American citizen. The Supreme Court ruled that Slaves were not citizens under the United States Constitution and also that Congress did not have the power to outlaw slavery in the territories.

The federalism ways were beginning to be questioned and a new theory was developed. Roger B. Taney succeeded Chief Justice Marshall after his death in 1835. He established a system known as Dual Federalism, where the braches of government worked best when they were separate but equal. Dual federalism is based on the theory that the federal and state governments are split into separate domains, and are supreme in those domains. This concept discusses the distribution of powers for both governments in the Constitution. This theory limits the federal government in certain instances. The state and federal governments are independent within their domains of operation. This caused a lot of tension between the federal and state governments instead of them trying to work together, and this system lasted for over a century.

The balance of powers between the national Government and businesses were not settled until years following the civil war. In 1895 the Pollock v Farmer’s Loan and Trust Co. ruled that the income tax was unconstitutional, however it became legal when the 16th amendment was passed in 1913 which allowed the federal government to charge an income tax. In the Lochner v New York case in 1905 said the states could not regulate working hours for bakers. This was used as an example to show how state and national were not able to regulate businesses until the New Deal in the 1930s. In the Hammer v Dagenhart case of 1918 the Supreme Court ruled that Congress has the power to regulate commerce but does not have the power to regulate the production of goods intended for commerce, meaning laws prohibiting child labor were unconstitutional.

In the 1930’s President Franklin Roosevelt New Deal came into action. This plan was known as Cooperative Federalism and took more rights away from the states. Cooperative Federalism is where the national and state governments instead of being in separate domains are supposed to “cooperate” and work together. With this new method of federalism the federal government being the supreme and that the states have to do what the federal government says. This plan also brought a change in federal aid where funds are distributed through categorical a grant which gives the federal government more power over spending and over the states. There are however some block grants which give the states more flexibility on spending. This concept is known as New Federalism which is what the U.S has now, started by Ronald Reagan in the 1980s. There are many court cases in the 1990′s under Chief Justice Rehnquist that showed New Federalism. In the United States vs. Lopez case the Supreme Court decided that because of the Commerce Clause the federal government did not have the right to regulate firearms in school zones. This shift of power was known as devolution to stop the violation of states’ rights. 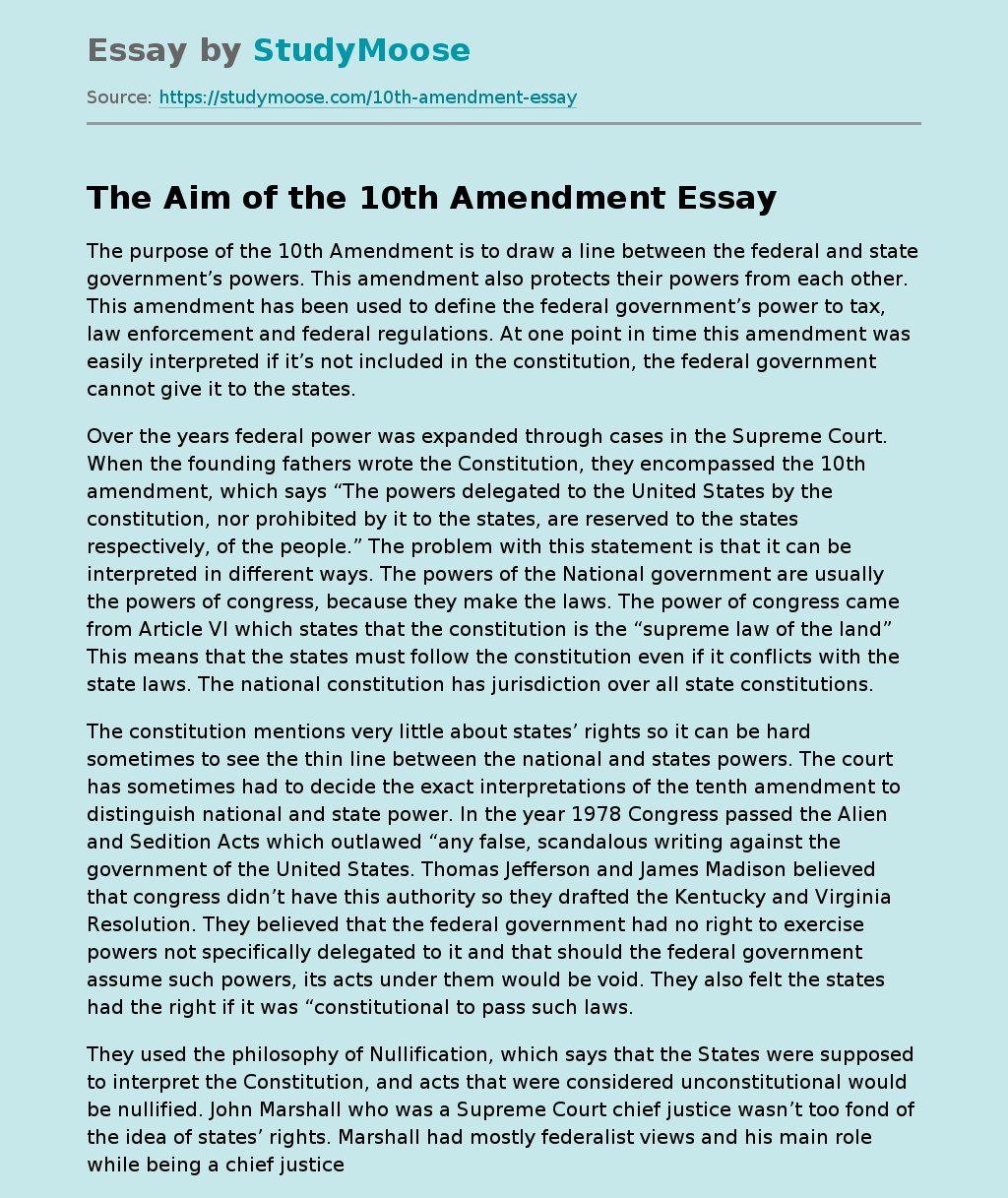