There are two systems of government, the unitary and the federal states, which are divided according to the organization of government, depending on how the power between different types of governments (federal and the state) is shared. Unitary system is one where control is focused in the hands of the one central force. Also there is the presence of local government which makes some rules and regulations but most administrative guidance belongs to the capital city. Unitary countries have a single constitution and the laws are established for the whole county.

Don't use plagiarized sources. Get your custom essay on
“ Unitary and federal government systems ”
Get custom paper
NEW! smart matching with writer

Federal system differs from the unitary.

The power is divided among national government and provinces. These smaller parts of the country have the right to have its own constitution, control certain areas but all this should not diverge with the national constitution which is accepted as a supreme. In some cases it is slightly uncertain whether the country is unitary or federal because it can have the features of both systems.

For instance, officially Great Britain is a unitary country, while it is usually said to be quasi-federal. Even though constitutionally the country is unitary, practically it is clearly distinguished with some federal components. Scots and Welsh were dissatisfied with the government’s interference as they kept a strong sense of their difference from England.

France is one more example of the decentralization process. France had an absolute unitary system until the idea to create the provincial administrations. This led to the distinctive difference between the regional subcultures and the derivation of the separation. In, 1960, to better economic development, the president reduced the number of departments and gave some planning power to each.

Spain was also decentralized. After the time of the dictatorship in the country, Spain’s regional problems were one of the most complicated in the Europe. Different regions of the country had unlike cultures and even languages. A try to set the French model of unitary system led to big discontent through the nation. Because of the emerged situation, the government created seventeen regional governments called autonomias, this systems is working well, but some problems and resentments still appear.

There are advantages and disadvantages of both governmental systems. If unitary system works productively when facing modern problems, the federal system is suitable for experimenting with some new programs. From the other side, federal division sometimes incompetent, corrupted and poor coordinated while too many control from the unitary systems leads to the total ignorance of the local government.

Unitary and federal government systems. (2016, May 18). Retrieved from https://studymoose.com/unitary-and-federal-government-systems-essay 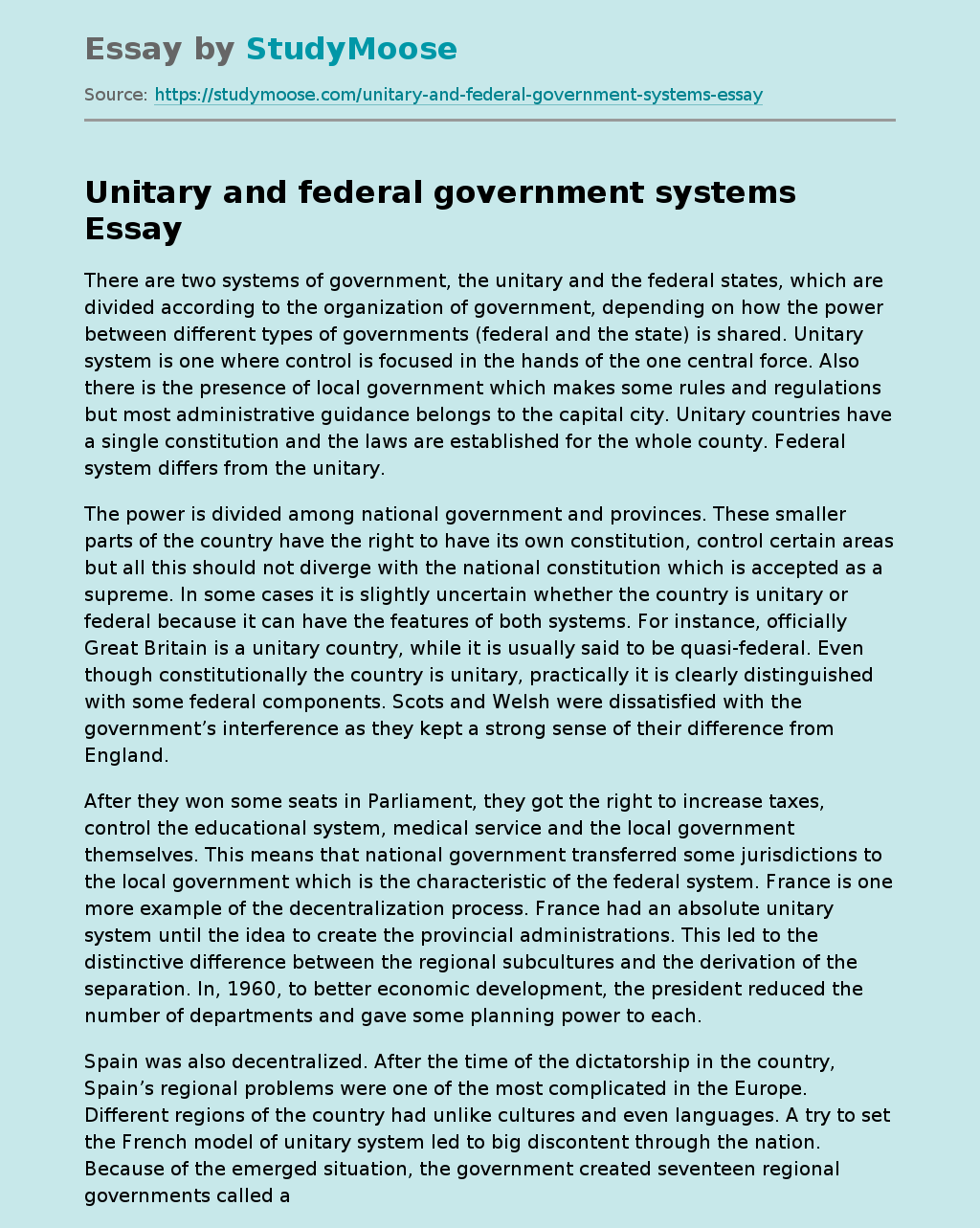