Youth Culture in A Property Of the Clan

“A Property of the Clan ” by Nick Enright unravels the death of a teenage girl at an underage drinking party and explores how the youths handle the situation.

“A Property of the Clan” is not light entertainment, or an easy play to read. It deals with an ugly and disturbing subject, but does so in a thoughtful and sensitive way, acknowledging the brutal reality of violence against women as an unfortunate experience in life. The plot of “A Property of the Clan ” is about teenage violence that existed within Australia at the time; an example is that the language and actions teens make are very abusive throughout the play when ever they drink alcohol.

The play contains many themes that involved the lifestyle of Australian youth including; Surf culture, mateship, teenage rebellion, peer pressure and partying (Underage Drinking and Drug use).

However, A Property of the Clan” centralises on the idea of Mateship, where you are put into a position to do the right thing or betray your friend.

Jared is to choose either do the right thing and tell the police who the murderer is or to keep the secret. With supporting themes such as teenage rebellion where the person opposes their parents command, peer pressure is when you are forced to do something because people are basically abusing you to do so otherwise you will be unpopular. Also the theme of partying is quite important to the Australian youth culture, compared to other countries. Australian teens tend to underage drink and abuse drugs more.

It also explores the diminished responsibilities of people under the influence of alcohol and the dire consequences of actions linking to the events in “A Property of the Clan”.

” A Property of the Clan’s” targeted audience should be about 17 years old and over, whether a less mature person can understand and explore their own ideas and experience or as an adult (or parents) can further understand the surrounding culture their children are in due to the sensitive content. The main characters from “A Property of the Clan ” are from the surfing community of Newcastle, Australia. At the beginning of the play you can see the community in the play is quite rough, Ricko, an aggressive boy, is the leader of the group. The other characters always seem to be intimidated by him; the relationship between Ricko and others is interesting because they know that he isn’t a good person, but still ‘hang out’ with him.

This links to the idea of mateship and peer pressure because of Ricko’s violent characteristics. People who watch this play will be influenced by the violence at first, but towards the end of the play, you can see the change of Ricko’s characteristics transform from a “Hardcore” to week depressed teen when he admitted that he murdered the girl. The language of “A Property of the Clan” contains very Australian typical 1990’s slang, using slang to communicate often, i.e “Bush pig”, “Pay out” and “mate”. Also the swearing is quite intense for a drama play being performed; it contains a lot of swearing and abusive words.

Play script ‘ A Property Of The Clan’

Youth Culture in A Property Of the Clan. (2016, Jul 06). Retrieved from http://studymoose.com/youth-culture-in-a-property-of-the-clan-essay 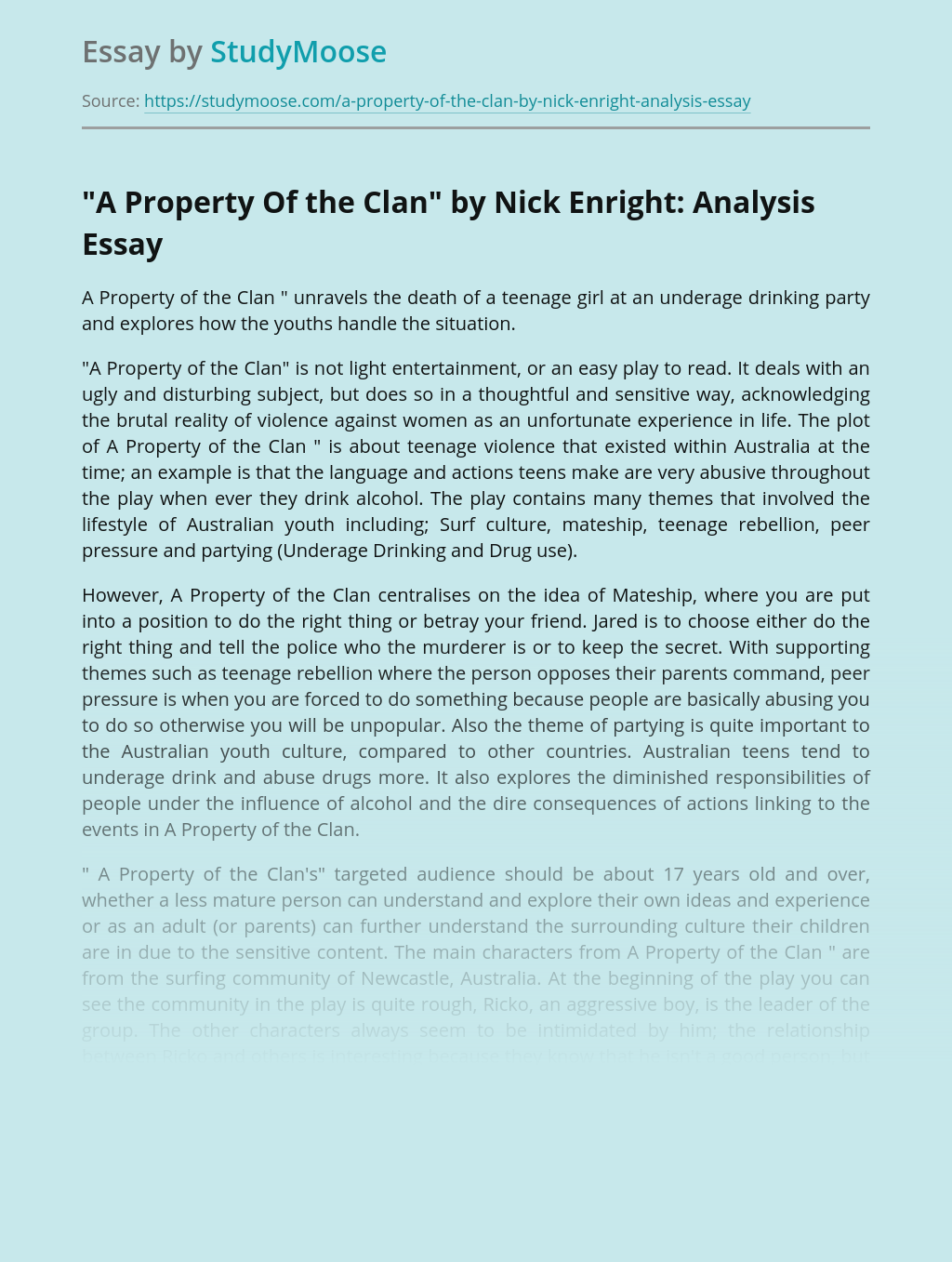 Don’t waste time
Get a verified writer to help you with Youth Culture in A Property Of the Clan
Hire verified writer
$35.80 for a 2-page paper
Stay Safe, Stay Original