A patent is a set of rights given exclusively to an individual or firm by an independent nation to the inventor or discoverer for a given duration in exchange for detailed information on the details of the inventions or discovery (Foray 28). These set of rights are exclusive to the inventors thus acknowledging their contribution and get financial benefits. Inventions that can be patented are new products, processes of manufacturing, improvements to an existing product or process, new chemical compounds or compositions, or processes relating of an existing manufacturing process (Perelman n.

Turn in your highest-quality paper
Get a qualified writer to help you with
“ Patents and Intellectual Property ”
Get high-quality paper
NEW! AI matching with writer

p.). This form of intellectual property encourages the economic and technological development by rewarding intellectual creativity.

Patents laws are set up to ensure that the owner of intellectual property benefits from his or her invention. The law gives the owner freedom of choice to do what they require with the invention as long as it does not conflict with other existing laws. The inventor can sell the patent at any market price they believe is commensurable, they can license the patent to others for use and in the process collect royalties from the users which increases their financial stability (Gold 135).

Patent laws also offers a sense of protection to the inventors for the stipulated time usually twenty years and this approach usually is a disadvantage to the competitors in the same line of work. These laws also prohibit dealing with patented goods without permission from the patent holder and this ensures that pirating of patented goods or services is a prosecutable case whereby one can be sentenced to jail or heavily fined (Perelman n.

Patents are a crucial part for advancements in science based professions such as medicine, biotechnology, computers and even drug chemistry. These advancements have born great fruits which have all been aimed at improving the life of mankind. In this paper, the strengths and weaknesses of patent laws and foreign investment, trade, innovation, public health, generic resources and traditional knowledge will be discussed. Patent laws have improved the life of investors greatly, this has led to greater determinations in patenting other products, and in the process, greater, and discoveries that are more useful have been made.

Strong patent laws are a major attraction to foreign investors who are assured of the protection of their goods or services. They are thus confident about imitations of their product, which has lead to an increased net demand of their products leading to higher marginal profits. The intellectual laws act as an attraction and assurance to foreign investors as their business is enabled a fair play ground to compete with existing indigenous firms (Smarzynska 41). Strong patent laws also offer a location attraction to foreign investors opting for areas with enhanced patent laws. This has lead to further development and improvement of economies of such areas as compared to areas whose laws are not well established. Stronger intellectual property rights can be a deterrent to new foreign investors since existing firms may have already established large market bases which may not be easy to break through. With this kind of market, monopolistic ventures may mushroom to the disadvantage of consumers since they may overprice their commodities due to lack of competitors.

Patent laws create ownership advantages conferring ownership advantages to firms serving the foreign markets (Cooter, & Ulen 124). Through the provision of legal redress against any violations, markets are expanded and increase in both multilateral and bilateral trade is enhanced. Patent laws increase bilateral exchange to foreign markets by reducing the costs associated with preventing loss of knowledge assets. Such costs consist of foregone revenues resulting from reduced bilateral exchange and or expenses incurred to make knowledge assets difficult to imitate especially when the destination country has strong imitative abilities.

According to Forays (13), strong patent laws provide incentives for people and firms to invest in research.Where there exists strong patent laws, inventors and innovators are energized since any benefits accrued from the new knowledge benefits them solely. With weak patent laws a free market economy fails to induce an optimal investment in research, development and innovation, since investors would not be able to recoup the full benefit from their investment. Patent laws also give strong ownership advantages to firms in developed countries, which encourage them to transfer their technology to developing countries through market channels at a cost. Strong patent laws may also be a disadvantage since they may lead to increased market power which results in high cost of technology transfer. In cases where there exist weak patent laws, this provides a loophole for technology transfer in non-market channels which would greatly disadvantage the innovators.

Patents are important to pharmaceutical firms as they help in appropriating the benefits to the innovators. Moreover, products and the development process are protected from imitators in order to avoid replication of same drug. The process of drug development is quite costly averaging at about 1billion US dollars for the actual discovery, development and regulation approval. However, patenting novel drugs is essential and only beneficial in developed countries where many firms may want to set up drug manufacturing firms. According to Vernon (14), the expensive process of research and development is usually compensated by profits, which arise from patent protection. Patent laws in drug development are quite complicated since while patenting new drug protects the producers from unscrupulous firms may also increase the cost of the drugs thus making them unaffordable to needy people.

The process of patenting innovations in public health may be long and tiresome which may discourage innovations. However due to emergence of tropical diseases in the developing world patenting may act as an incentive for continued research in both drug development and innovations of new procedures for their early diagnosis and treatment. All this will lead to improved health care for patients especially in developing countries where cost of drugs is beyond the reach of the majority who are struggling. Patent laws encourage the development of medicinal compounds or products. These conditions being rare are not economically viable for the pharmaceutical firms since the profits margins are so minimal thus little research is channeled towards them. However, through patenting, firms that delve into this kind of research because they are protected exclusively thus giving them the sole ownership rights to manufacture and distribute them at a given cost (Gold 131-132). This enables them to make profits.

Weak patent laws in the health sector have been associated by rise of firms, which exploit the whole process of drug development. Drug imitators can benefit from innovators’ free approval and produce duplicate drugs at a much lower cost relative to the real cost of discovering and developing the new product. Patenting the genetic resources and traditional knowledge ensures that people who participated in the development of the new information are acknowledged for the work they have done. To scholars being acknowledged builds confidence in them and is a motivator for them to work even harder. By them being acknowledged, it shows that they become authorities in their specific fields, which further leads to production of more accurate and high quality new knowledge. Patent laws regarding information are in conflict with human rights since plant information should be made public for the benefit of all. It is not easy to relate patent laws and human rights since it exist in different perspectives on the same depending on the contributors (Gold 186). As such, information to the knowledge should be easily accessible at minimal cost affordable to all.

In production of pharmaceuticals, patents laws restricted patent term to 20 years, this was disadvantageous to people who developed drugs for infrequent illness because sales of the drugs could not give adequate returns within the period. It was until 1984 that the congress amended the drug act by coming up with orphan drugs act that extended the period of patents to 25 years in order to allow developers to pay-back the cost of development and get profits (Gold 132). In addition, patent restricted use of available drugs for research of new drugs development. This presented a challenge to development of new and generic drugs until when the congress amended the patent laws to allow use of drugs for research purposes.

Patent laws have more strength compared to the weaknesses depending on the issue of involved in discussion. Through patenting, the innovators and inventors are not only recognized as the owner of the emerging products but they also have various benefits such as financial gains to payback on the capital invested. However, the patent are only limited to 20 years, which in some cases is disadvantageous to products with weak marketing such as orphan drugs. However, government intervention has seen developers reap high profits for their ideas, and products over a given period. The weakness of patent is limitation on research where they restrict third party from using the original product or idea to develop new product thus slowing research and improvements of the existing ones. Hence, caution is necessary to ensure that patenting does not give rise to monopolies, which would discourage competition at the expense of the consumers. 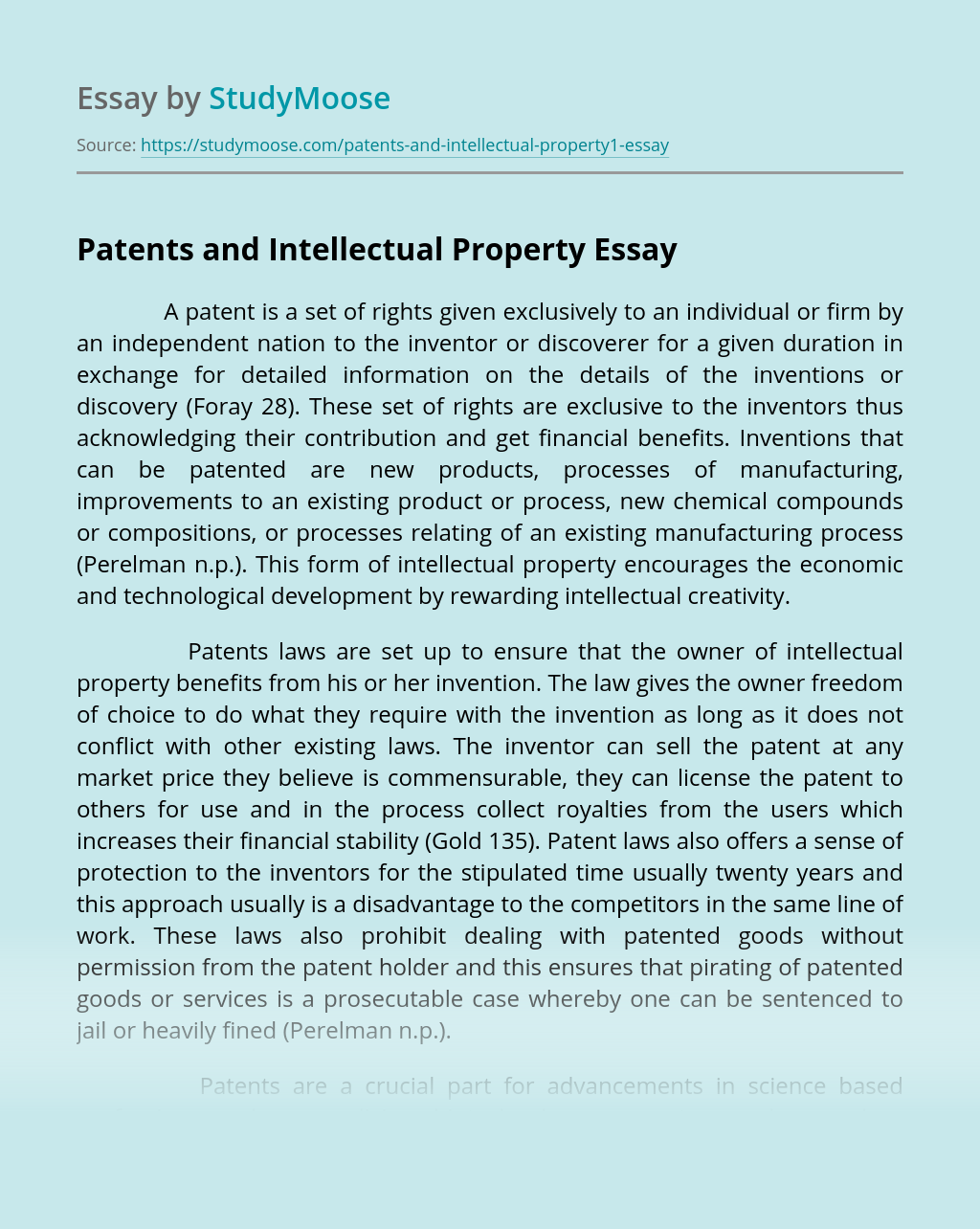 Turn in your highest-quality paper
Get a qualified writer to help you with
“ Patents and Intellectual Property ”
Get high-quality paper
Helping students since 2015
Stay Safe, Stay Original