Wuthering Heights - Point of View Number Three, Through the Eyes of Hareton Earnshaw

It’s a pale yellow, windy evening in October, outside is drizzling rain, but neither of them have noticed. Inside the house, the two friends sit next to the dimly lit and crackling fire, she on the small stool by the oven, and him near the splintered and ancient dining room table. He has not spoken for a while, but she does not appear to mind the silence. He stares at his hands, rough and covered with sore blisters from fierce work.

Don't use plagiarized sources. Get your custom essay on
“ Wuthering Heights – Point of View Number Three, Through the Eyes of Hareton Earnshaw ”
Get custom paper
NEW! smart matching with writer

And then, he studies her, her blond hair like a halo around her head, catching the rays of light from the fire. He wonders if he could ever make her understand.

“Did you love your father Cathy?” he asks in a voice which is thick with emotion.

She hesitates, but not for long.

“But, of course Hareton. He was the only family I ever had.”

“Then perhaps,” he begins “You will understand what I mean when I say that Heathcliff has been to me what your father was to you.

He waits for her to reply, but when she does not, he carries on, choosing his words slowly, as if he was picking up each one off the air.

“My father died when I was a young boy, my mother is a distant memory, a face which I cannot remember. Heathcliff brought me up like his own son, and taught me everything that I know, making me into the man that I am. Heathcliff was the only friend I ever had…until I met you.

He glances up at this point to her agitated face. When he has finished, she begins to speak in clipped and short words, her face pale with anger, her cheeks flushed with emotion.

“Yes, Hareton, we are friends, and now that you have me, it is time that you realized how Heathcliff had ruined both our lives. Not just mine, but your life too! He killed my mother, my father, my husband and everybody that I care about. He stole the land of which I am heir, he stole what is rightfully mine, and also what is yours! He destroyed your father, and now he lives in a house that is drowning in lies and deceit. If you don’t open your eyes Hareton, we shall drown too!”

She stops, her hands in tight fists next to her sides, her nails digging into her skin. Then, she looks at him to see his reaction to her words, but there is none, for he seems numb and indifferent to what she has to say. She tries again.

“Enough!” he yells, interrupting her, his words bold and etched. “I will not hear anything more against Heathcliff! How would you like it if I spoke so ill about your father? Heathcliff is like my father, and I cannot take you speaking so about him, I cannot! I will not choose between you and him!”

She is still, but the words have had an effect on her composition, the things that he says seem to be like whips lashing out on her skin, the words leaving deep and raw marks throughout.

“I would much rather have it that you spoke the devil of me, and hated me, like before, than speak so about Heathcliff, and try to turn me against him.” He finishes, and looks downwards, ashamed of the way that he has spoken so harshly to her.

The last sentence makes her arise from her stool and start towards him, leaning down; she takes his hand into hers.

“Hareton, I never hated you. I was a fool, an utter and spoilt fool, who could not see the friend that you were to me. It was ignorance, not hate. We are friends now, are we not? And if Heathcliff means so much to you, I will never speak ill of him to you again,” she says passionately, her eyes sparkling, but her jaw set.

As the fire goes out, she gets up slowly to put more wood inside to feed it. Even after she has left his side, he can still feel the touch of her small, soft hands in his. As she moves, her skirt swishing against the hard and dusty floor, her golden hair shining bright around her head, and her long, dark eyelashes framing her face, he wonders if he could ever make her love him. 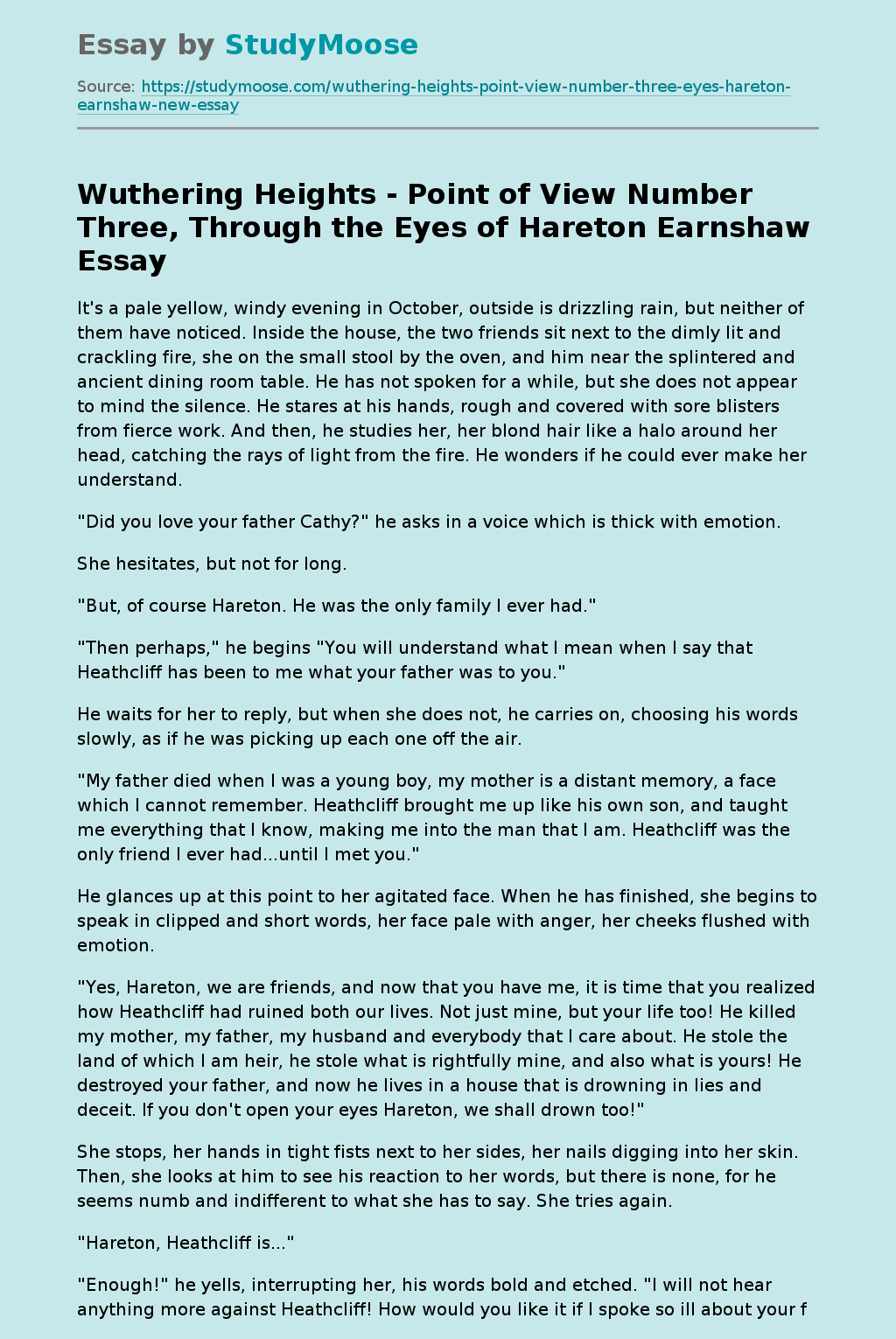