Wu Zhao as a Leader

When the Tang dynasty began in 618, it lasted till 765. In this dynasty there was a major cultural revolt. The Emperor Taizong executed numerous developments in all the features of a life of a Chinese. From financial, economic, political, foreign relations and culture, he improved life for all who were working for him not just only the class that was ruling. Women became self independent and were asked to be educated in social ethics, philosophy and culture art. Another thing which was allowed was Divorce as it was a peaceful and mutual process.

Don't use plagiarized sources. Get your custom essay on
“ Wu Zhao as a Leader ”
Get custom paper
NEW! smart matching with writer

When the Emperor died in 649, his son Gaozong was named as the next ruler of China. Tradtions were that when the emperor died, all of his wife can never marry again and were sent to a nunnery home where they would spend the rest of their lives. At that time Wu Zhao was just twenty six years old. Emperor Gaozong fell in love with Wu Zhao and often visited her in the nunnery.

After 3 years of the death of Emperor Taizong, Wu Zhao was brought back to the palace and was given the status of a 2nd grade wife to the Emperor Gaozong.

Although she was very much a special wife in the eyes of the emperor yet she did not feel she had enough power to control over everything. The 1st status wife of the Emperor was the only person in between Wu Zhao to become the most powerful female in the whole Chinese Empire. Life as an Emperor wife could be formed with politics and danger and Wu started to compete for full power and authority in the palace.

The empress Wang and the 1st grade concubine Xiaoshu thought that Wu is a major threat. Wu Zhao came to knew about it and she killed her own daughter and held responsible Empress Wang. For this the empress was mortified and Wu was given the position of the Empress of China. To get this status, Wu Zhao killed many of the beloved concubines (wife) of the emperor including the senior wife Xiaoshu. When Wu Zhao or Wu Zetian became China’s empress, almost all of the affairs of the state were made upon her decision as the Emperor was not in the state of the mind to take certain decisions.

In that time, Wu Zhao eliminated a number of enemies which gave her a clear path in her career as a political leader. When Gaozong had an eye infection in 660, Wu Zhao began to clutch all of the power in the appearance of supporting the Emperor Gaozong in handling the affairs of the entire empire. Emperor Gaozong changed his name to Tian Huang which means Emperor of heaven where Wu Zetian changes her name to Tian Hou which meant Empress of Heaven in 674. The people who were their subjects called them Er Sheng which meant two gods.

When Emperor Gaozong died in 683, Wu Zetian put her son’s incharge of the throne Li Xian3 as Emperor Zhongzong and Li Dan as Emperor Ruizong. Wu Zhao used her elder son Li Dan who was known as Emperor Ruizong as a dummy and through him she ruled china for almost thirty years in between 661 to 690. In this period of time she was encouraging the approval of female being leaders by demonstrating cleverly for the rights of women. Numerous professors were hired to write books on the biography of well known women who lived in the history of China and ranked her own family from the mother’s side to a much higher position.

Than in 690 she finally took control of the throne and ruled the empire under the name of Empress Wu Zetian. She encouraged the idea that whoever the rule is, the person should rule the country as if a mother would rule her very own children. Many things were accomplished in the rule of Wu Zetian, some of which were very essential in the history of China. She is recognized with the initiating interviews of government so that each and every person whether being a male or a female was entitled for the place of power if they were worthy enough and even though if they had a poor start to life. 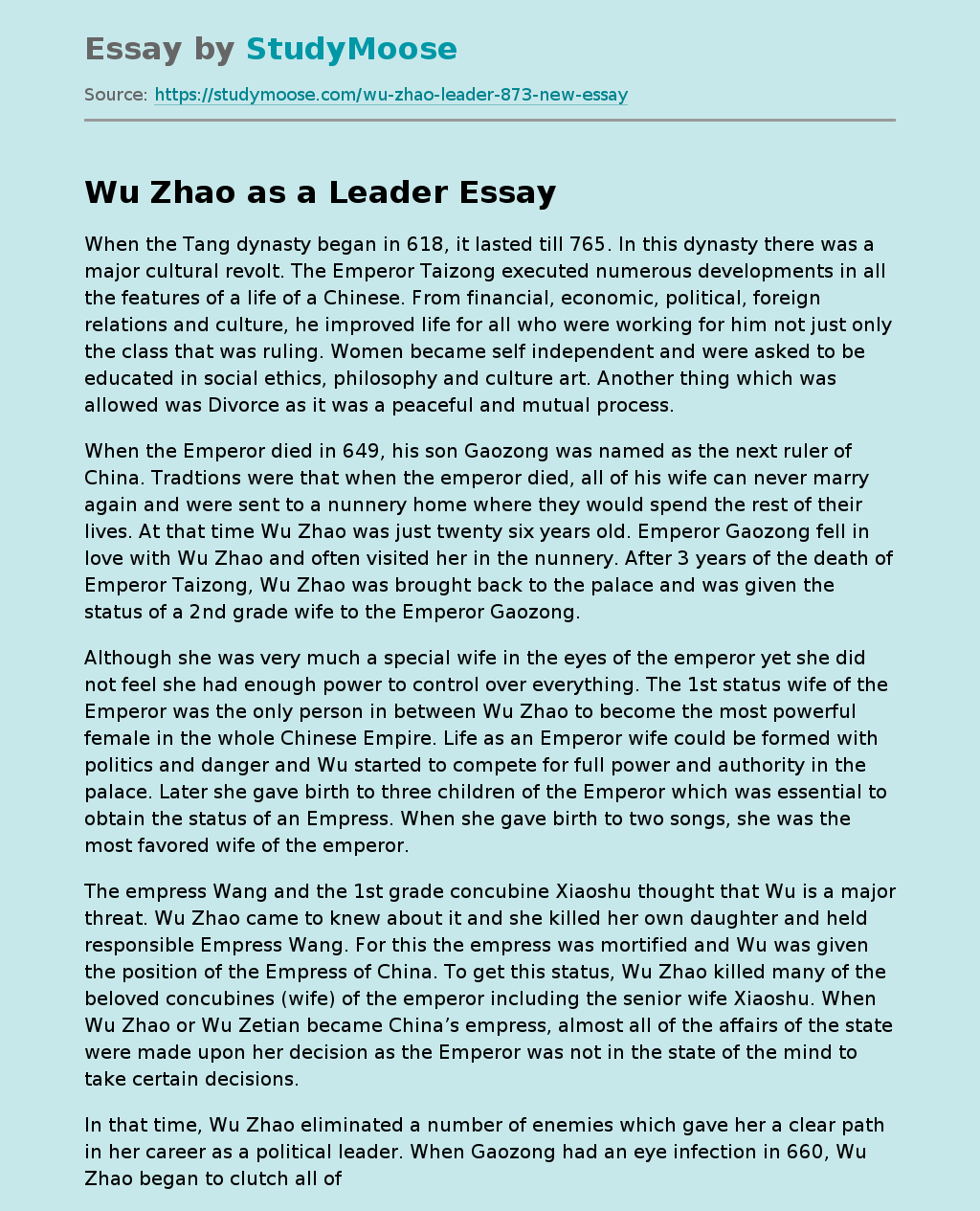