Don't use plagiarized sources. Get your custom essay on
“ Gary Kelly, an Effective Leader ”
Get custom paper
NEW! smart matching with writer

Herb Kelleher and his management team emphasize an easy going relaxed corporate style that provides employees with extensive operational independence. Southwest’s culture, which emphasizes employees as the airline’s “first customers” and passengers as the second, has been integral to Southwest’s success”. (Smith) The concept of treating your customers well and your employees better is not a new concept, by any means. The trouble with that concept occurs when the company loses touch with the people that actually pay the salaries, the customer.

I have worked for a company, that no longer exists, that treated their upper managers like royalty; the IT person drove a company car that was a brand new Hummer. All of the profit went to bling and not back into the company.

“The skills and traits that he possesses are human resourcing. Making sure his team has all the proper training knowledge and knows how to make his customers happy. He also believes in making sure his people (employees) are even happier.

They are the key to making his business a success, if your employees are happy there is no reason why your customers will want to come back and be serviced by them. Kelly is a great decision maker in these trying economic times. With his decision making skills led him to the innovative idea of bags fly free.

Tag that up with his leadership skills and there is no reason why this company wouldn’t be a success”. (Shaw, 2013) I read somewhere that Mr. Kelly would hold cookouts for his people and that the overnight crews got upset because, due to scheduling, they could not attend. Kelly’s solution; the pilots and he held cookouts for the overnight crews at 2:00 am. That way the crews could enjoy the fruits of their hard work. Talk about insuring employee loyalty; WOW!

The core competencies of Southwest Airlines that I was able to find are locking up fuel hedging contracts, keeping cost down through fast turnaround times, flying only one type of aircraft, treating customers like kings and queens, and treating employees even better than the customers. By locking up fuel hedging contracts, Southwest was able to pay less for the fuel than other competing airlines. While facing possible layoffs, Kelly challenged his ground crews to reduce the turnaround times from 55 minutes to 15 minutes.

The crews were at to achieve that goal and eliminated the possibility of layoffs. By having a fleet of only having Boeing 737s, Southwest has been able to keep maintenance cost extremely low. Southwest has had their flight attendants play games with their customers, while in flight. An example of this is the flight attendants would say that the first customer to show them that they were wearing socks with a hole in them would receive a free round trip ticket anywhere that Southwest flew. As for treating their employees better than the customer; the whole cookout idea pretty much covers that core competency.

Gary Kelly, an Effective Leader. (2016, May 19). Retrieved from https://studymoose.com/gary-kelly-an-effective-leader-essay 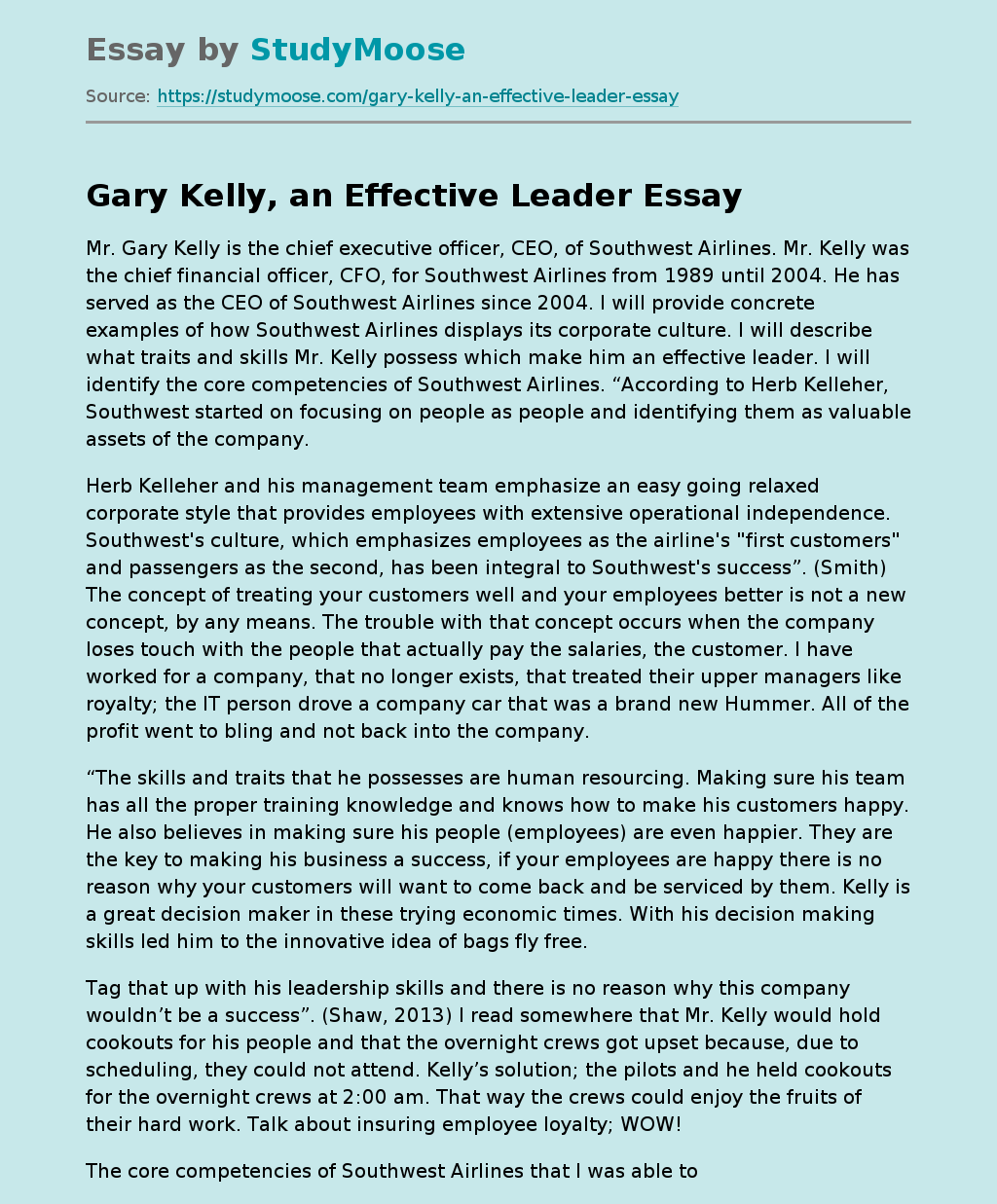