Psychology is now considered to be a branch of science that focused on the study of the human mind, making them men and women of science. As such, it would be assumed that the manner on how psychologists would conduct their therapy sessions would be following the scientific method that is commonly seen among scientists. However, George Kelly discovered that this was not the case.

Because of this, he developed his Personal Construct Theory to be a method for psychologists to study and assist patients during their consultation and therapy sessions.

Based on his studies, he concluded that the use of dogmatic interpretations to address a patient’s psychological concern did more harm than good because he likened all individuals as scientists.

He defined dogmatic approaches used by psychologists as the belief held by psychologists that only they held the truth regarding an individual’s behavior and personality based on their interpretations of the information provided to them by a patient.

This became the main premise of the development of his Personal Construct Theory, which became the foundation and establishment of cognitive psychology as a field of study within psychology and other social learning theories that have been developed by other psychologists. According to the Personal Construct Theory, an individual lives his or her life through the process of reaching out on upcoming events in his or her life through personal interactions based on the actual events.

This means that an individual has a hold on the direction where his or her own life would go (Kelly 2007). With the development of the Personal Construct Theory, Kelly (2007) stated that in order for a patient to receive optimum therapy from consultation sessions with a psychologist, the consultation session should have an interactive communication between the patient and the psychologist in order for them to understand various issues that the patient was going through.

Up to this point in time, psychologists have developed theories regarding the human mind and human psyche based on definite factors such as society, the environment, the unconscious part of the human mind and childhood experiences. The development of these theories had caused both psychologists and patients to accept that certain anxieties felt and experienced by patients were brought about by events that the individual had no control of.

This would lead psychologists and the patients to believe that the most logical approach that the patient would do in order to improve his or her psychological well-being was to accept these anxieties and that these are irreversible parts of their own behavior and personality. With the introduction of the Personal Construct Theory, Kelly had changed the role of the individual from a passive product of experiences and the unconscious into one who is able to actively have a control on how his or her personality develops.

As such, the individual has the ability to change his or her personality for the better based on the suggestions presented by the psychologist, changing the role of the psychologist from a profession who enlightens the patient by analyzing and pinpointing the cause into one who would pinpoint the causes of one’s anxieties and fears and a mediator to assist the individual into reaching a possible solution to modify the behavior of the individual. The approach developed and presented by Kelly is now commonly seen during consultation and therapy sessions between psychologists and their patients.

Nowadays, a psychologist would ask questions to the patient in order for them to come to terms with their issues. From here, the patient would be guided by the psychologist in order to reach a possible method in order to address the issues of the patient. The would explain as to why through consultation and therapy sessions, individuals are now able to alter their behavior for the better in spite of the individual having been known to possess deviant behaviors in the past. 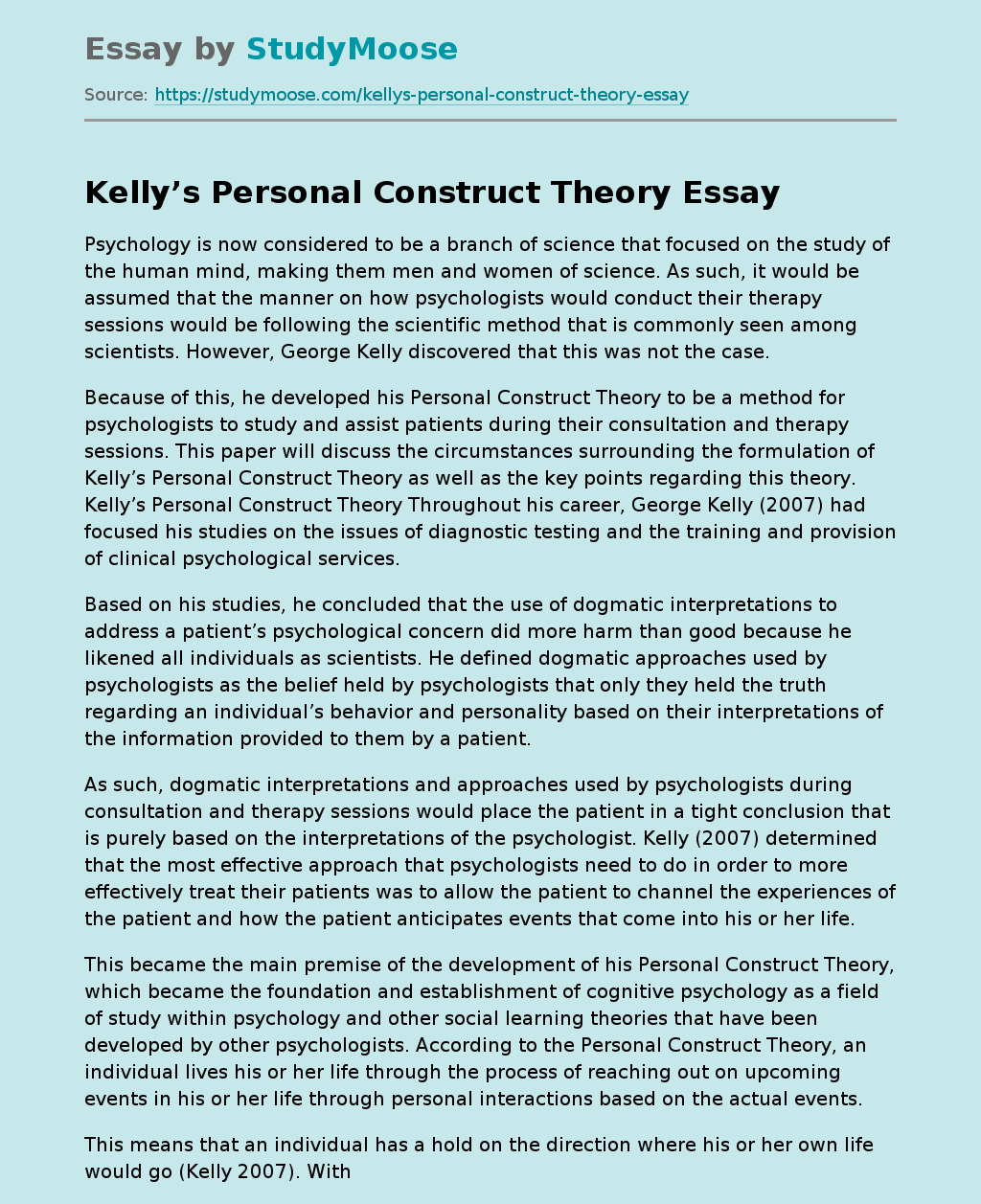