Crime is a Social Construct

Crime is the product of the social structure; it is embedded in the very fibres of society. In this essay, I aim to explore different theories as to why crime exists within society and how we as a society therefore construct it. Crime is a social construct; it is always in society and is on the increase. It is inevitable. Where does it come from? It comes from legislation, from the making of laws.

Functionalists see crime deviance in society as a function, in that it serves to remind us, through public condemnation of those who have broken the rules, of our shared values and norms.

Don't use plagiarized sources. Get your custom essay on
“ Crime is a Social Construct ”
Get custom paper
NEW! smart matching with writer

Furthermore, they suggest that crime is a result of structural tensions and a lack of moral regulations within society. If the aspirations held by individuals and groups in society do not coincide with the available rewards, this disparity between desires and fulfilment will be felt in the deviant motivations of some of its members. This was the basis for Merton’s Anomie theory.

Emile Durkheim saw crime and deviance as social factors and believed both of them to be inevitable and necessary elements in modern society. The people in that society are less constrained than in traditional times. There is more room for the individual choice in a modern world and it is therefore inevitable that there will be some non-conformity. Durkheim recognises that no society would ever be in complete consensus about the norms and values which govern it. He also saw that it was necessary for society in that it fulfils two important functions.

Firstly, deviance is an adaptable function, and by introducing new ideas and challenges in society, it brings about change. Secondly, deviance promotes boundary maintenance between good and bad behaviours. It constantly keeps us aware of what acts society deems acceptable or not. (Durkheim 1964)

The Positivist approach is simply about a deviant’s reaction to external forces beyond their control. The followers of the Interactionist theory, on the other hand, reject this positivist approach and say that it is due to the internal factors of the individual.

The Marxism theory however, is structured towards the accumulation of wealth rather than social need. Edwin H Sutherland was the first sociologist to study this area known as ‘White Collar Crime’ in 1949. Let us now look at crimes of the powerful and the less powerful. There are two main points; deviance is a product of unequal power relations and equality in general. Despite the fact that the law is in favour of the dominant class, some of its members do break the rules for their own gain. Power and equality affect the quality of deviant acts. Thus, people that are more powerful are more likely to engage in profitable deviant acts such as corporate crime i.e. bribery and corruption in business and politics, misconduct by professionals such as lawyers etc.

On the other hand, the powerless are more likely to commit less profitable deviant deeds such as burglary, theft and armed robbery. (Ermann and Lundman 1996) Power, or rather social class, is therefore the key element which determines the type of deviance people are likely to carry out. The powerful are more likely to commit deviant acts because of something that is called ‘Relative Deprivation’. This is the feeling of being unable to achieve the high standards they set for themselves, compared with the powerless, whose standards are typically low. Their aspirations are so high that they become less achievable. The more that people experience this Relative Deprivation, the more likely they are to commit deviant acts. (Cookson and Persill 1985)

Furthermore, the elite have more legitimate opportunities than the poor worker to commit crime i.e. A banker will have better opportunities to defraud customers for instance, and because of his status, the crime is less likely to be detected, whereas the poor worker would probably have to resort to robbing the bank, a much more visible crime. Furthermore, the powerful are subjected to weaker social control. They have more influence in the making and enforcement of control. The laws against higher status crime, the White Collar crime, are therefore relatively lenient and rarely enforced, but the laws against crime which is committed by those with a lower status, are harsher and more often enforced because they are so visible and detected much more easily. The activities of White Collar crime occur on a daily basis, but there is no public outcry or moral panics about it and therefore no legislation made, whereas, ‘street’ crime attracts massive law enforcement. As Jeffrey Reiman (2001) so aptly stated, “The rich get richer and the poor get prison”.

Interactionism was quite popular from 1960s to 1970s. Max Weber and George Herbert Mead favour the Interactionist approach and suggest that crime is a social process, that crime is an interaction between the victim, the police/officials and the offender. Crime is shaped by the nature of this interaction and this selective labelling, stigmatisation, negative labelling of those without power and more vulnerable. This approach focuses upon the interaction between deviance and those who define it as such, hence the Labelling Theory. Howard F Becker, the founder of this theory, argues that society creates deviance by making rules. Rules that when broken, constitute deviance, and by labelling those particular people as deviants, they are also labelling them as outsiders.

Therefore, it is not the act of the person, but rather a consequence of applying the rules by others to an offender. Deviant behaviour is behaviour that people so label. Becker suggests that in one sense there is no such thing as a deviant act. An act only becomes deviant when people define it as such, when they label it as such.

Such labels largely override their status as workers, friends, parents etc and others see them negatively. This ‘labelling’ of people who commit crime, often results in the denial of an ordinary life to them, and because of this denial, out of necessity, they develop illegitimate routines and often resort to a life of crime. Thus, a criminal career is formed and the only way that they can be a part of society, is by grouping with likewise people, and being part of a different type of society. It may be a criminal society, but at least they fulfil that human need to belong. This process results in what is known as the self-fulfilling prophecy i.e. a person is to be known as a criminal, he/she may as they may as well act that way.

The Feminist approach is critical of the mainstream approaches in that they see them as male dominated and this gender bias is part of the structure of the Criminal Justice System, the majority of its personnel being male. Crime is specific to the gender, males being more violent and women committing softer crime such as benefit fraud, shoplifting etc. This approach sees that there is a need for more support and resources for women and that anti-sexist training is necessary in the police force. These sociological theories are intended to apply to both sexes but feminists disagree. For example, Merton’s anomie theory assumes that people are inclined to strive for material success, which is true for men but not necessarily for women, although this is on the increase. (Merton 1957) In the past women have been socialised differently to men. They are traditionally less interested in achieving material success as their place has been in the home.

However, this social construct is changing, because women are being given more equal opportunities, and are more likely to strive for that material success, which would account for some increase in women’s crime rates. (Chesney-Lind 1997;Daly and Chesney-Lind1998) This may be an indication that opportunities for women are still far from equal. Anomie theory may apply if this is the case, as the opportunities available to women are lacking in relation to women’s increasing desire for independence and material success, therefore causing the disparity that Merton talks about. Furthermore, men and women calculate the risk of arrest differently. Women are more aware of that risk and that awareness becomes a disincentive. Another interesting argument would be that it is a fact that over 90% of people convicted of crime, are male. (John Hagan et al 1996)

Let us now examine how time and space has affected the way that society has constructed crime and deviance. For example, is the death penalty an act of murder? It is in some countries, but not in some US states. Is abortion an act of murder? What about war? Murder exists in some contexts as a crime and not in others. Crime then is a social construct which is ever changing according to time and space. It makes no sense to say that “crime is a result of biochemistry only” because crime is the result of political decision making, and we can easily change those decisions according to different contexts, without changing our own biochemistry.

The government, in its efforts to tackle the ‘crime problem’, has little regard for the way that working class people and their environments actually work. Its new measures to be tough on the causes of crime fail to question why these things happen, and hence how they might be prevented. Creeping inequalities in education, the health services, housing and pensions, contribute to the lack of belonging that people feel. This disconnected feeling of our seemingly society-less age can only contribute to the ‘crime problem’. It is time to review other methods because the government’s endless clamping down on those who already have the least stake in ‘society’ is not the solution.

The Law and Politics Book Review

The Law and Politics Book Review

Crime is a Social Construct. (2016, Jun 23). Retrieved from https://studymoose.com/crime-is-a-social-construct-essay 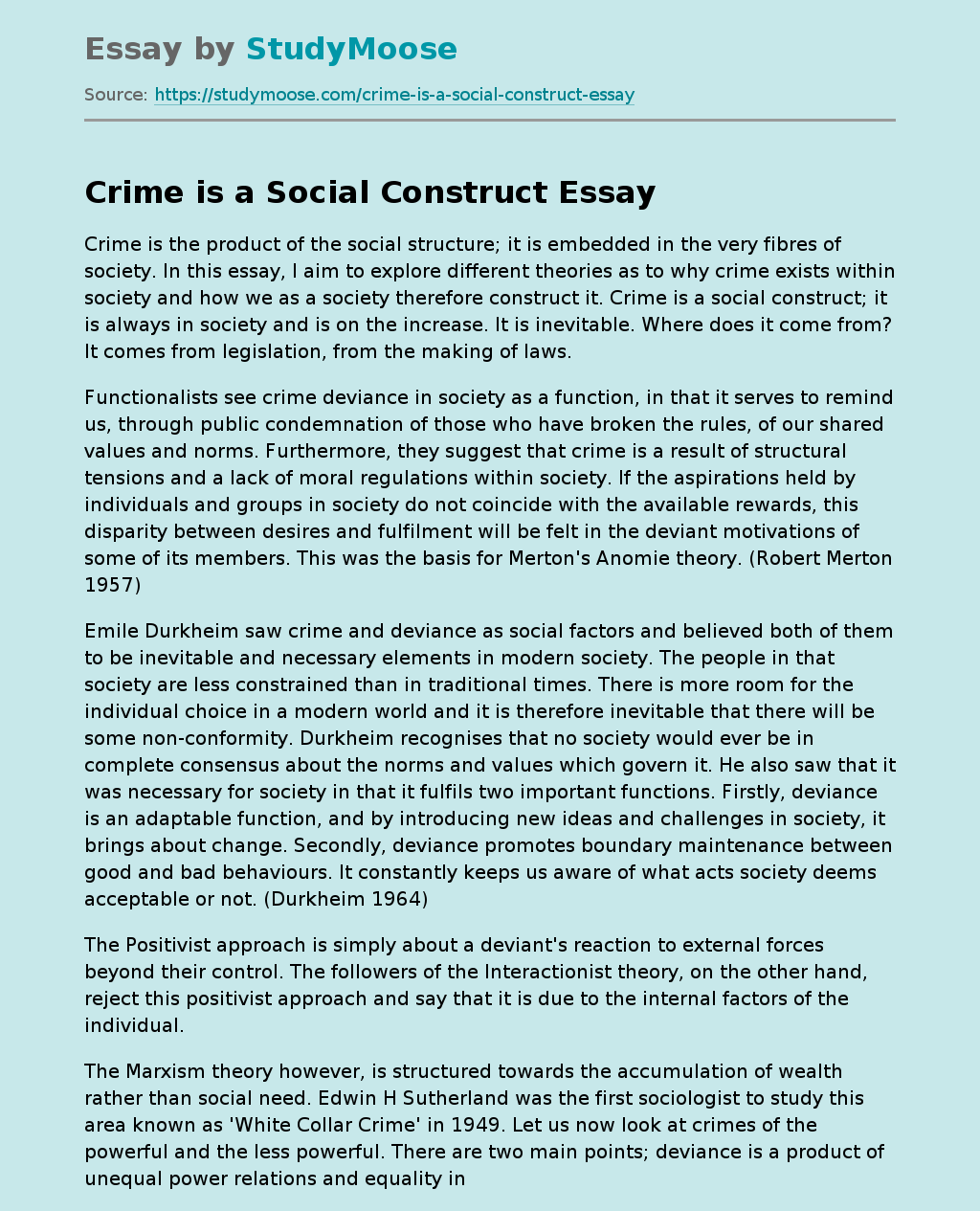