Read the case: Kelly’s Assignment in Japan (Chapter 9 pages: 363-365) posted on Connect learning platform –study reflectively and identify the characters and the principal issues in this case.

1. ————————————————-
Drawing from you understanding on the assigned readings (Deresky), explain the clashes in cultural, customs, and experiences that occurred in this situation.

In this case “Kelly’s Assignment in Japan”, we have an example of expatriation poorly managed and unprepared. Different cultures, customs seem very important between Japanese and Westerners.

Don't use plagiarized sources. Get your custom essay on
“ Case Study Kelly’s Assignment in Japan ”
Get custom paper
NEW! smart matching with writer

Added to this barrier, we also not that there is no preparation on the part of the Kelly’s boss, who did not even attempt to form Kelly on the different ways to communicate and understand this culture so different from hers.

Primarily, the first problem we notice is that the Japanese culture to understand with difficulties that a woman could have such a great degree and be positioned so high in the hierarchy.

Kelly also had a language problem.

She had no training in the national language, and the little she knew was that she learned very quickly during her trip in the aircraft.

Kelly has not been informed of the Japanese custom business requirements and expectations, as having absolutely a card to prove her accomplishments to the client company’s CEO.

Then during his meeting with the CEO, she had direct physical contact, patted him on the back and asks him what his first name was. While the contacts of this type and the questions too personal, are not well perceived in the Asian pay.

Kelly has not been prepared to lead in a country with a different culture. In addition, his family did not have time to learn and not do to adapt to Japanese culture.

Just like Kelly, his family did not have the time nor the resources to understand and prepare for this new culture, which seems to be opposed to them.

Firstly, the whole family did not expect to have as small spaces to live.

Kelly’s husband, himself has struggled to find a job, with no contact, and having gaps in understand and functioning of this new culture. Despite all his efforts, he has not successfully attempted to find a job when he was previously a good position.

The children also had difficulties adapting to this new country and a new culture. The language barrier was for them a very big problem, in fact, in their new school the greater part of the children did not speak their language. Children themselves could not speak Japanese, and it was difficult for them to adapt.

Added to this, the difficulties met with Kelly to lead his communicate with customers; have discouraged the family, who has become aware regret. Finally, the family even wanted to return to their front, with its culture and customs.

Kelly’s boss offered her a new position abroad, in Japan, even though she had no knowledge of custom and Japanese culture. Confident she could do a good job in a very short time, as in last issue missions.

However, his boss did take into account the fact that the countries in which it had already been proven a culture similar to theirs.

He thought it was enough to offer him financial compensation and benefits that everything goes well and it is motivated by this post.

Added to this he did not care of the family, how were adapted to the children in the new country. In addition, he was not too concerned with the problem of employment of the husband of Kelly, even though she had told him.

Kelly’s boss should have, in addition to compensation, provided training to Kelly and her family, which would have enabled them to understand the Japanese culture and customs.

In addition, he would provide training of Japanese language to Kelly and her family.

He could also help the husband of Kelly in his job search in Japan.

And finally, he should have put in place a monitoring system after the installation of the family in Japan, to ensure that everything goes well.

All this process takes time and investment from the boss. A too rapid departure is finally ended in failure.

If I were Kelly, I call my boss and explain the situation in Japan, and it is probable that my mission turns to failure if we do not do something. I would say that there are large differences in culture and custom that I have not successfully attempted to grasp. I would propose to find a replacement temporary, to have a extensive training of the culture and language. I admit that there is still a risk of failure after the upgrade, because I am a woman and it is not well received in Japan have a superior female. 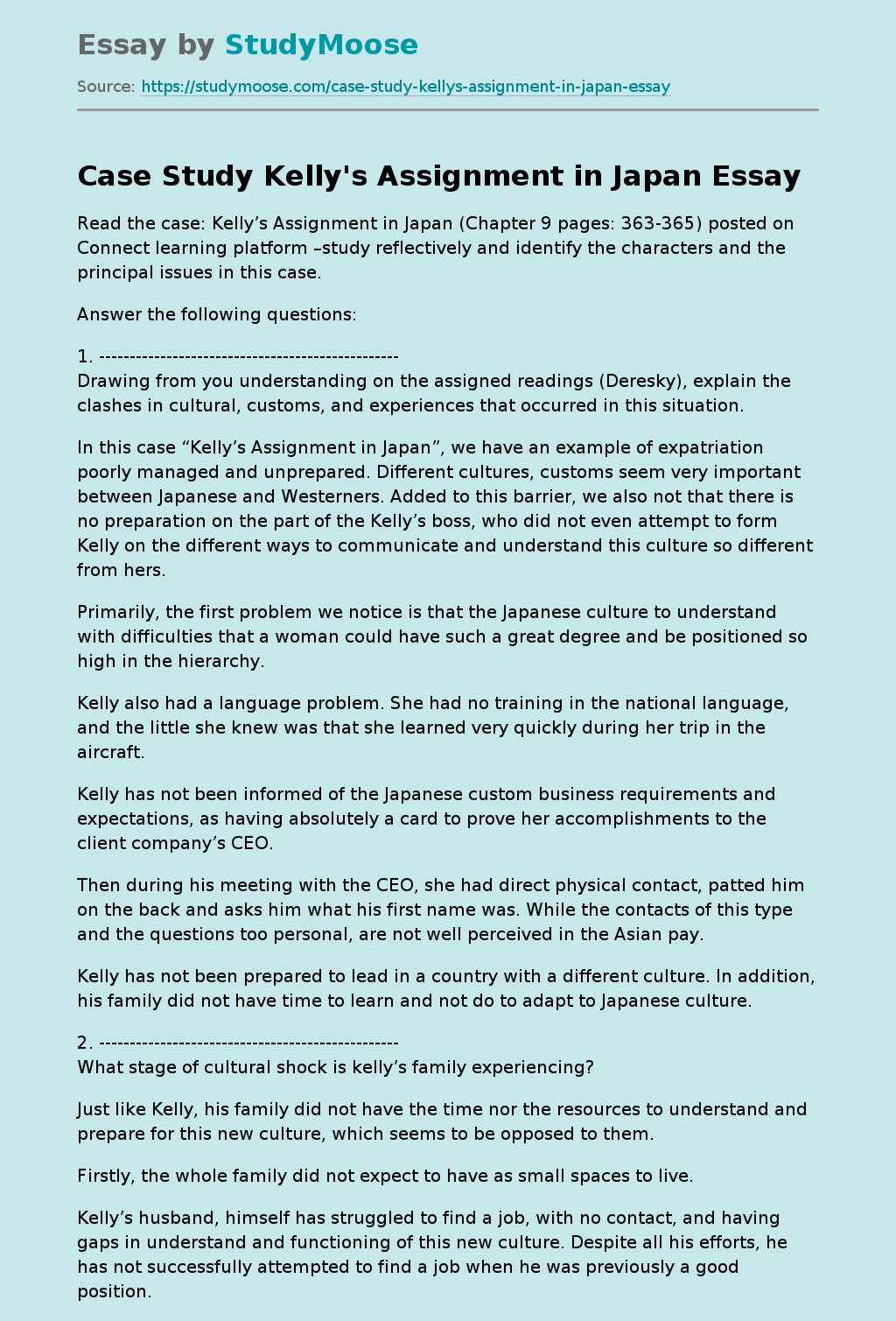