Question 1: How would you characterize Wal-Mart’s approach to global management? The trademark of Wal-Mart’s global management approach focuses on 3 main strategies: low price, best value, large selection of goods & high quality service. Being the world’s largest retailer, Wal-Mart will enter the international market by providing a wide variety of products at a lower price than its domestic competitors. In addition, one of the common strategies of Wal-Mart is to partner or acquire a local supermarket retailer who has already had a good knowledge of the market in order to save time & money.

Turn in your highest-quality paper
Get a qualified writer to help you with
“ Report on Case Study: Walmart Japan ”
Get high-quality paper
NEW! AI matching with writer

Wal-Mart is also famous for its great use of distributor network. They pay a lot of attention to choosing a good location when expanding their business, a strategy which has been proven successful in its original US market.

However, there are many challenges need to be overcome in this potential market: 1. Socio-cultural Differences: In Japan, consumers often equate bad quality with low price. Changing consumer perceptions is not easy or cheap. In addition, Japanese customers demand a quick entry and exit from the stores which makes cutting costs by eliminating staffs from the retail process unadvisable. 2. Fierce Competition: It is unavoidable that there are many strong domestic rivals in a highly potential retail market like Japan.

Therefore, Wal-Mart would have a huge advantage over its local competitors in its ability to price low. Moreover, the Japanese market appears to be ready for value chains. Wal-Mart is confident it can make significant inroads in Japan under its low-price model, but the challenge will lie in its ability to convince Japanese consumers that its everyday low prices don’t translate into poor product quality. Fortunately, Japanese customers are becoming more value conscious, there arises a huge opportunities for discount retailers to capitalize on changing cultural conditions. Entry strategy of Wal-mart in Japan: slow and steady. It had learned from past mistakes and knew that getting to market faster didn’t necessarily equate to being better. For example, in Germany, where retail regulations and swift price competition are both fierce, Wal-Mart reacted before it inventory systems were in place, and the result was substantial operating losses.

Driving the strategy is the installation of Wal-Mart’s Retail Link operation, a JIT inventory replenishment system shared between retailer and supplier, effectively eliminating the wholesaler and speeding up payables and receivables collections. Wal-Mart believed Seiyu was the partner best suited for its entry strategy because by working through a local partner, Wal-Mart believed it could better wade through Japan’s long and costly network of suppliers, which has long frustrated many other foreign investor. Since only the biggest Japanese retailers have the leverage with manufactures, partnering with an existing market leader should prove invaluable when attempting to negotiate direct deals. Moreover, Wal-Mart avoids having to build stores and can take advantage of Seiyu’s well-recognized brand. Question 4: Do you think Wal-Mart is doing enough cross-cultural training with its Seiyu employees?

What are the greatest challenges Wal-Mart faces in relating to its Japanese employees? In our opinion, in such a different market like Japan compare to the US’s, Wal-Mart is doing enough cross cultural training with its Seiyu employees, but will take time to make employees to adapt changes. First, to reinforce the importance of selling correctly, Wal-Mart has put store managers through weeklong training sessions and has flown hundreds of Seiyu workers to company headquarter in Arkansas. This hopefully can be successful in training Wal-Mart Japan’s employees to learn global management and selling style which meet the world standard according to Seiyu’s CEO said. Nevertheless, according to the case, Wal-Mart arranged just a few cultural training classes to teach the employees to be more outspoken, upbeat and goal-oriented while encouraging employees continually praising co-workers.

Apparently, Wal-Mart somehow is not applying a right strategy. Japan is a country where people highly appreciate humbleness. Therefore, appraising co-workers is considered as an inappropriate action which cannot be easily accepted by large number of employees. As a consequence, this might cause difficulties especially for trainee to adapt a new perception within a short term. The greatest challenges Wal-Mart is facing regardless of its Japanese employees should be the culture differences, they have to find out how to deal with the resistance to change of workers. The second problem is maintaining the budget for retraining staff, sending them to foreign environment to learn new management methods to increase sales of Japan Wal-Mart Stores, which may take long time.

Question 5: How can Wal-Mart respond to some of the negative impressions of its employment practices in the United States so that these perspectives do not follow it as it expands internationally? With the problem of sex-discrimination lawsuit in 2001, Wal-Mart has fought to class action decision as recently as early 2007. However, its attempts have been unsuccessful. Besides, in order to counter the negative publicity of the discrimination lawsuit, Wal-Mart also opened a diversity office in November 2003, enhancing their claim that: “Wal-Mart is a wonderful place for women and minorities to work and isolated complaints do not change this fact” Despite the complaint of lowing workers’ standard of living that lead to the negative impact on Wal-Mart’s image, the company has little trouble keeping its shoppers with low prices or attracting workers with the promise of a career in a fast-growing company. Nevertheless, Wal-Mart offers a very promising promoting opportunity to each of its staff. At Wal-Mart, anyone, without a high school degree start as a cart pusher in the parking lot can end up being a store manager, district manager or a regional vice-president. Those reactions ensure a future for Wal-Mart as the biggest private retail employer in the world. 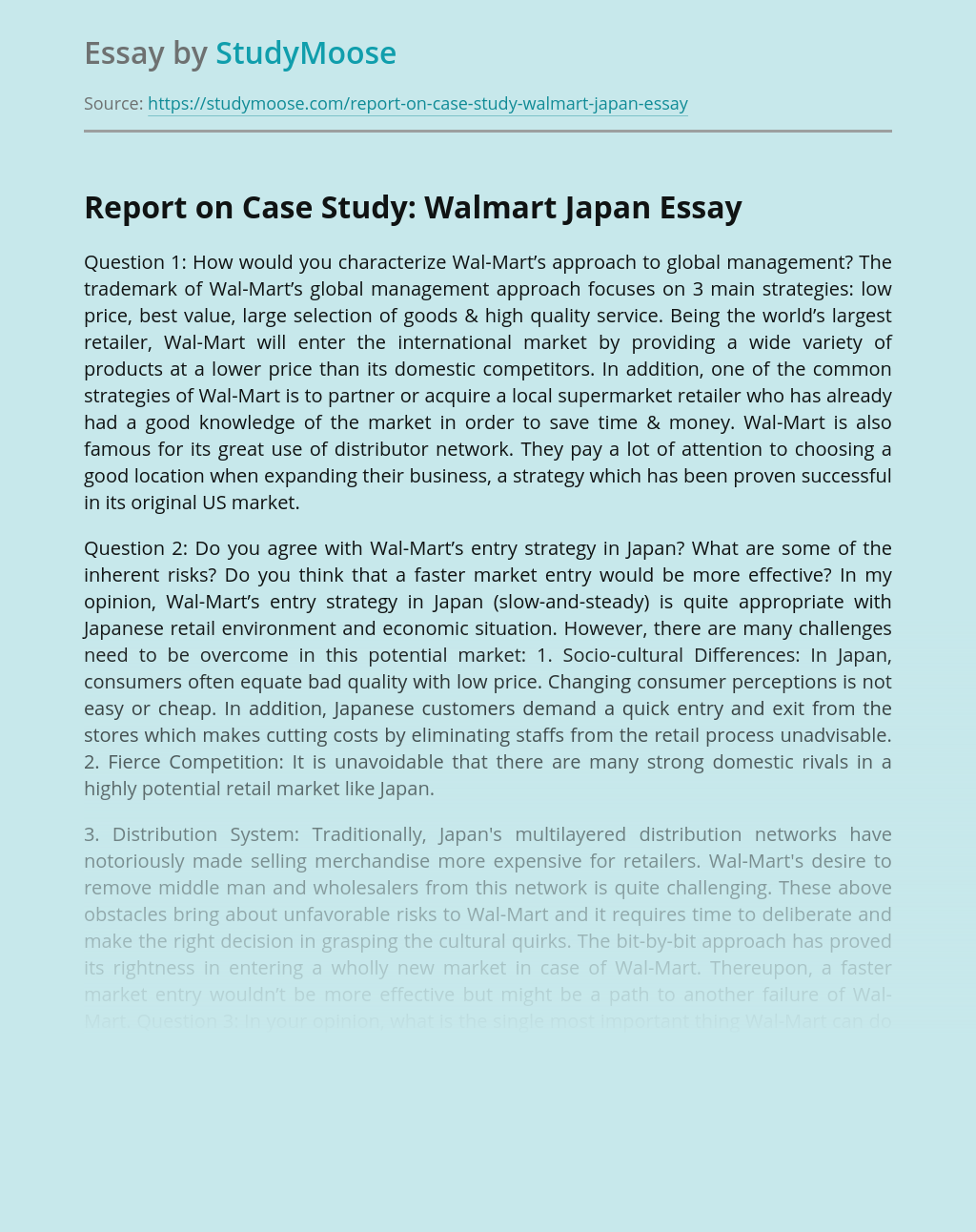 Turn in your highest-quality paper
Get a qualified writer to help you with
“ Report on Case Study: Walmart Japan ”
Get high-quality paper
Helping students since 2015
Stay Safe, Stay Original