Response to literature- black snake: the daring of Ned Kelly

Bushrangers are known to be ruthless outlaws. Many people have thought of Ned Kelly as a villain, some think of him as a hero or possibly a victim in most cases. Ned Kelly has committed various villainous acts or has been a part of scenes where he most likely wasn’t supposed to be. However, Ned has also done heroic acts and has been victimized by numerous Victorians at the time. Ned Kelly had been expected to be a villain since a young age.

Don't use plagiarized sources. Get your custom essay on
“ Response to literature- black snake: the daring of Ned Kelly ”
Get custom paper
NEW! smart matching with writer

Young Ned had done many things a twelve year old wouldn’t think of committing, such as robbing a bank. Ned was originally sentenced to an unexpected trial because he was caught by a trooper when he was flashing a horse in the local streets of Greta. Apparently, Ned thought the horse he was riding belonged to a friend of the family who left not long ago but the horse was actually stolen. Ned had explained to the judge that he didn’t know that the horse was stolen.

Unfairly, the judge charged Ned for receiving a stolen horse and was sentenced to three years of hard labor. As for the family friend who stole the horse, he was sentenced to only six months of hard labor. Many Victorians thought that he deserved it, although, I believe he was highly victimized at the scene of the trial. Ned had always been highly protective of his family. There was a scene that happened at the Kelly’s house between a trooper that spread everywhere in Victoria.

A fellow constable had arrived drunk at the Kelly’s doorstep to arrest Ned’s brother Dan who was accused of horse stealing. Later on, the constable started to act inappropriately towards Ned’s sister Kate.

Ned’s mother got a hold of a shovel and dented the constable’s helmet. After the crime scene, a trial for the incident occurred and Ned’s mother had to serve three years of hard labor until someone pays the bailing payment. Ned, Dan and two mates of theirs formed a fugitive gang and robbed banks and did obscured acts to pay the bail money. Many different stories have been recorded. This may be a villainous and slightly idiotic thing to do but some may think it is loyal and heroic. There was one incident that made all Victorians turn on Ned. There was a shooting at Stringybark Creek where the Kelly gang had their hideout. The results from the shooting scene left two women widowed and nine children fatherless. Since then, there had been an increasing reward for the find of the Kelly gang. Despite all the villainous acts stated, Ned Kelly was victimized through many events. All his and his family’s trials were unfair due to biasness.

Victorians judged the Kelly family and no one listened to their point of view. Ned Kelly stated that the incident at Stringybark Creek was a misunderstanding and that they never planned to shoot. As for the incident at the Kelly house, Ned Kelly was never at the crime scene and was believed to be four hundred-six hundred miles away. It was that the constable was shot by Mrs. Kelly herself but tended the wounds. When the constable went back to the station, he had told the judge, fellow Victorians and partners that is was Ned who shot him. Nevertheless, the judge charged Mrs. Kelly for three years of hard labor and since then, Victorians had been on the hunt for the Kelly’s. Through many of Ned Kelly’s past events, due to all reasoning and evidence stated, it is quite clear that Ned Kelly was put through many crime scenes that he and his family were victimized in. 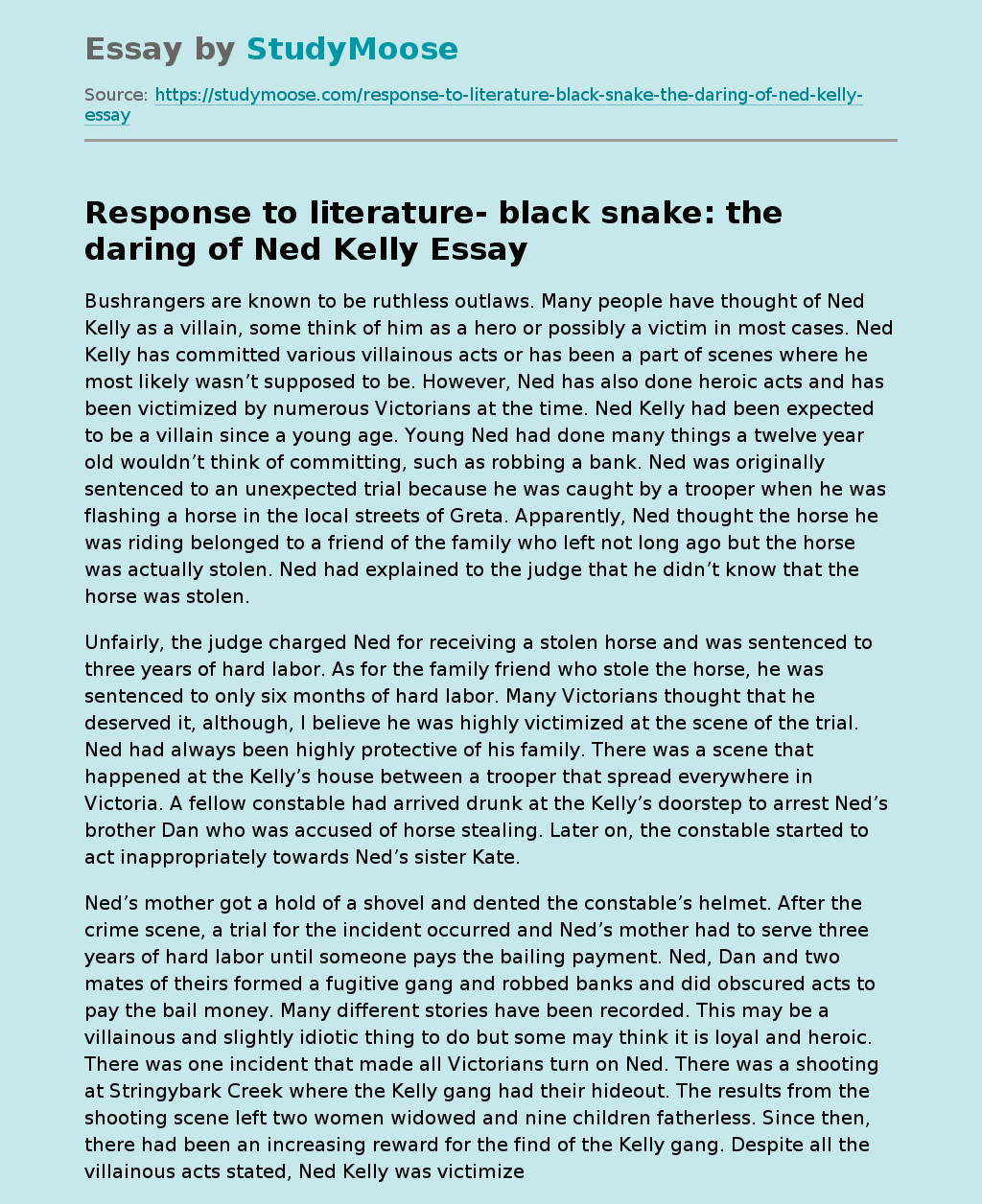