Many were still debating on the credibility of Jose Rizal as the national hero of the Philippines. Many assumes that he was an American hero for he was appointed by the Americans. Others believed that Bonifacio was the real hero for he was the one who fought the battle for the Philippines. Who is who? Who is the real hero, who is the greater leader? I myself believed then that Rizal do not deserve to be the national hero and is not worthy to be called a leader, that was until i enrolled my Philippine Ideology subject.

Don't use plagiarized sources.
Get Your Custom Essay on Jose Rizal, an exemplary leader Just from $13,9/Page

In the course i found out the exemplary deeds of Rizal from his childhood up to his execution. I came to realize why he was chosen to be the national hero. Among his great deeds, his leadership was at its peak when he died at Bagumbayan.

Before the his death, he already showed what a leader should be. In his last travel abroad, he was then asked to stay at Singapore and hide their but he opt to continue his voyage though he already knew where will his fate will lead him, a leader must be brave as what Rizal had shown, he was not afraid to face his challenges and he faced these with such bravery.

Furthermore, when Spanish armies arrested Rizal, Rizal do not hesitate but he voluntarily go with them, a leader should know when to fight and when to stay calm. In his last days in Dapitan, Rizal was visited by a vast number of friends and relatives, being a leader does not mean “me” but it is “we”, because of his characteristics, Rizal gained lot of friends whom together with his family did not left him until the end.

Until the death of Rizal he showed that he was an exemplary leader, who among us can face our death as Rizal did? Who among us can sacrifice his own life to the intruders just for the country. Rizal died for me, Rizal died for you. Without his death the eyes of our fore fathers might not been opened and maybe until now we are still wrapped on their arms. Rizal is a hero, a leader, a Filipino. 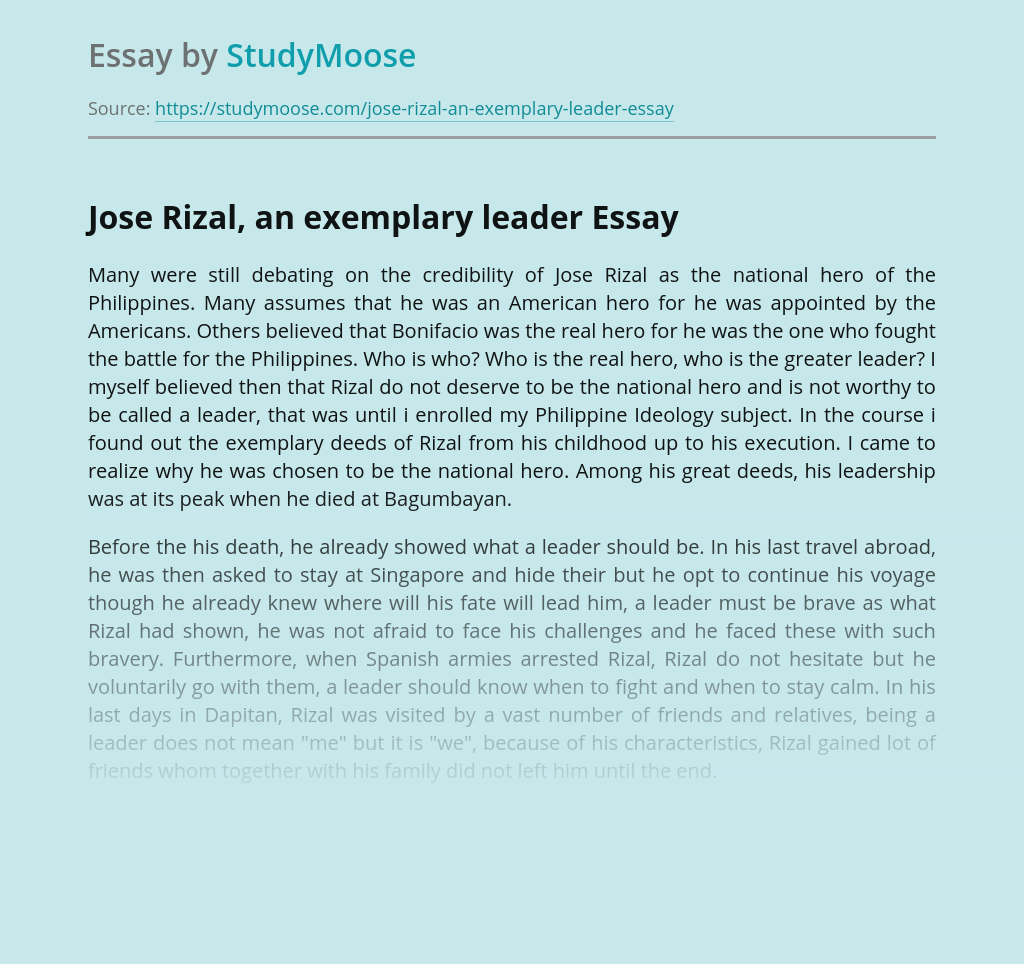 When asked to describe what a hero is, more often than not people would use movie characters such as The Amazing Spider­Man, Superman, Batman, or Captain America to provide examples of what best reflects the character traits of a hero. By definition, a hero is a person who is admired or idealized for courage, outstanding...

Some men are born heroes while others earn the title after their death. Either way, a hero’s life and his achievements are cemented in the history of the world and become timeless. Napoleon Bonaparte (1769-1821) is known today as one of the most intelligent and skilled leaders to have ever lived. He is also known...

Many people believe in heroes, who are selfless and willing to sacrifice themselves to benefit others. Heroes also exist in different cultures, and they usually represent courage and adventurous. According to Joseph Campbell’s theory, heroes in stories undergo a process called “The Hero’s Journey”, which is the classic plot structure of heroic stories, in order...

A hero might typically be described as a courageous person who has the strength of a warrior and a leader to triumph in battles. However, a hero may also be someone who uses his brain just as much as he uses his brawn. In ‘The Odyssey’ by Homer, Odysseus embodies the ideal human qualities that...