A Letter to His Parents by Dr. Jose Rizal

Psychoanalytic criticism:
* It adopts the methods of reading. It argues the literary texts, like dreams, express the secret unconscious desires and anxieties of the author. * A literary work is a manifestation of the author’s own neuroses. * It usually assumes that all such characters are projections of the author’s psyche. * It validates the importance of literature.

* Seeks evidence of unresolved emotions, psychological conflicts, guilt, ambivalences and may result to a disunited literary work. * The author’s own childhood traumas, sexual conflicts and fixation can be traced within the behavior of the characters in his/her literary work.

Don't use plagiarized sources. Get your custom essay on
“ A Letter to His Parents by Dr. Jose Rizal ”
Get custom paper
NEW! smart matching with writer

1. repression. Every human has to undergo a repression of the pleasure principle by the reality principle; for some, even whole societies, repression may become excessive and make us ill. The paradox at the heart of Freud’s work is that we come to be what we are only by massive repression of the elements that have gone into our making.

A vital conception in Freud’s thought is that that which is repressed will ‘return’ in some way — among the ways are parapraxis and psychic disorders.

3. self. The early years of child’s life are not those of a unified subject but are a complex, shifting field of libidinal force in which the subject has no centre of identity and has indeterminate boundaries with the external world. The self which emerges, however, from the Oedipus complex (see below) is while more stable, a split subject, torn between conscious and unconscious being, as it is forbidden to consummate the union it desires and so must repress those desires and substitute more acceptable objects of desire.

4. the Oedipus complex. The Oedipus complex is/marks the structure of relations by which we are produced and constituted as subjects. The self must be taken in hand to exist in the world — formed as an individual, a gendered subject through the Oedipus complex, and the threat of castration. The child desires (union with) mother, the father intervenes and bars this union; the son sees his difference from mother (her lack of a phallus), adjusts to reality by seeing its capability of being like the father who is also his enemy and whose power threatens to castrate him. This is not an easy or unproblematic process but is deeply disturbing and marks the child as he represses his true desire. This process is less clear for women, who resign selves to being like the mother, and displace their desire for, in their case, the father, onto a desire to have a child.

5. dream interpretation. The aspects of a dream are condensation (focusing various meanings in one referent), displacement (something like the use of tropes, allusions), regressive transformation (replacing ideas and feelings with images), secondary revision (making everything fit into a story ): all concepts which can easily be transferred to the function of literature.

7. disorders
1. neurosis [obsessional, hysterical, or phobic]: the result of internal conflict as the ego defensively blocks the intrusion of desire; these begin during the Oedipal phase, arrested or fixated ; analysis uncovers the hidden causes and acts to re-live, re-interpret the failed development, in order to relieve the patient of her/his conflicts, so dissolving distressing symptoms.

2. psychosis: the ego comes under the sway of the unconscious — paranoia, schizophrenia; a harder case to treat than neurosis, as the self has been virtually subsumed. 8. transference. As the patient talks to the analyst, he transfers his conflicts onto analyst: this creates a controlled situation, a form of repetition of the conflict, in which conflict the analyst can intervene; what is repaired in analysis is not quite what is wrong in real life, but the patient is able to construct a new narrative for herself, in which she can interpret and make sense of the disturbances from which she suffers.

9. the early theory of the self: According to Silverman(see particularly Ch. 2 and 4) the earlier theory of the self is a more flexible, dynamic concept than the later. In the early theory, or ‘topography’, found in The Interpretation of Dreams, the mind is divided into three areas, the memory, the unconscious, and the preconscious. There are as well two temporary conditions, memory, which leaves sensory mnemonic traces (fully accessible to the unconscious, but fully accessible to the conscious self), and the motor response. The unconscious is, of course, not itself accessible to the conscious self except in disguised form. The cultural norms and repressions are stored in the preconscious, which is somewhat available to the conscious self. It is the preconscious which substitutes attainable gratifications for unattainable ones, and which works to substitute thought for sensory and affective memories. The pleasure principle is in fact the motive to avoid discomfort, not to seek pleasure; the discomfort is produced by the conflicts that we inevitably feel through repressions, prohibitions and so forth.

10. The later theory: the Id operates at the behest of the pleasure principle; the ego, formed through a series of identifications with objects external to the self, carries out the commands of the reality principle; the superego in an internalized ideal image of the father in his power, his privilege, his repressiveness, and his genuinely-experienced superiority.

A Letter to His Parents by Dr. Jose Rizal. (2016, Mar 18). Retrieved from http://studymoose.com/a-letter-to-his-parents-by-dr-jose-rizal-essay 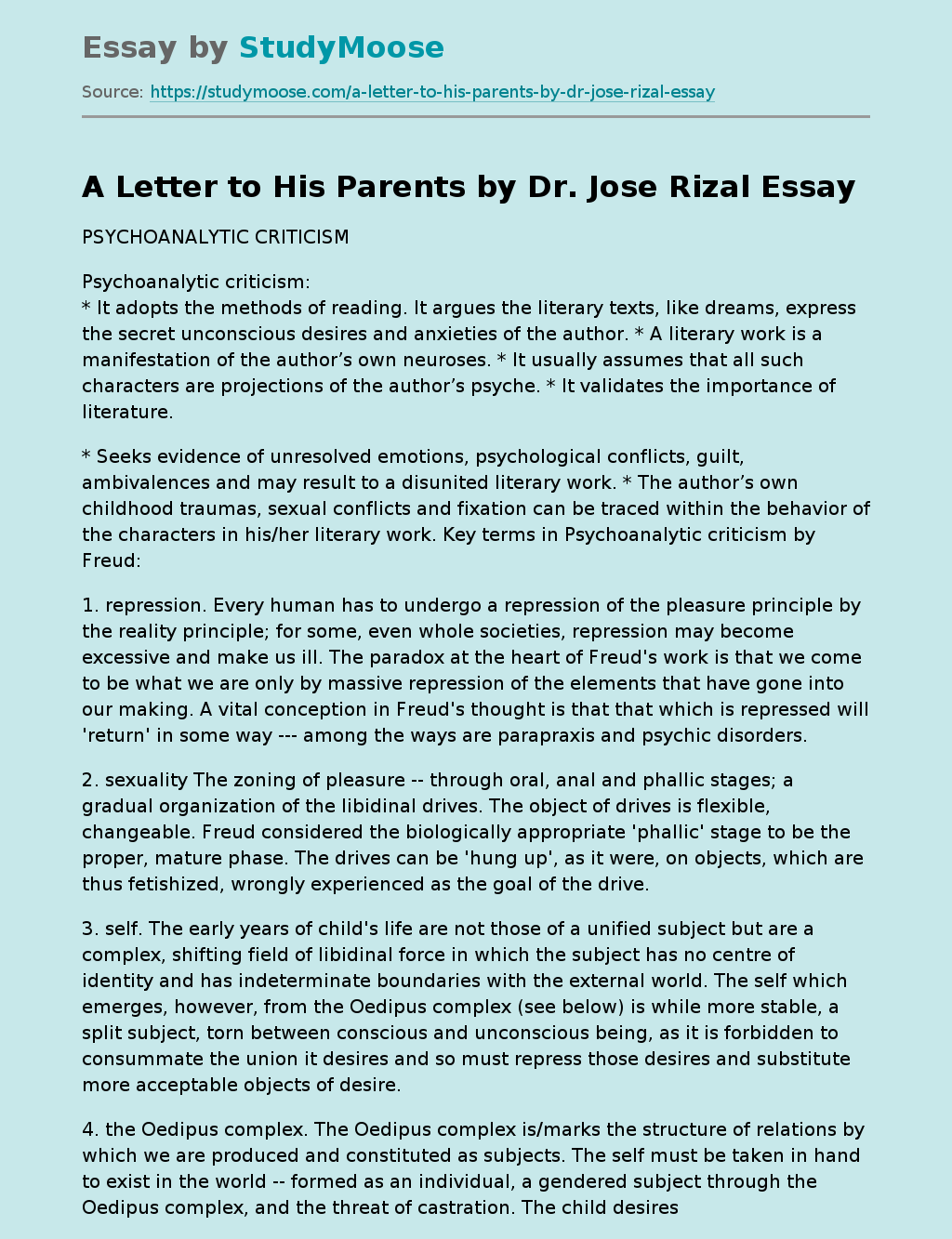