To be loved or feared as a leader

Leaders in fields ranging from military and politics to business and even education have been posed with the choice of instilling love or fear among their respective followers. Traits like warmth and trustworthiness of a leader instill love among followers and fear of a leader originates mostly from his strength and competence. Although there are numerous other traits in a leader, warmth and strength are the most influential. According to psychology, a major part of other people’s perception about a person is determined by these two dimensions of personality (Cuddy, Kohut and Neffinger, 2013, p.

Don't use plagiarized sources.
Get Your Custom Essay on To be loved or feared as a leader Just from $13,9/Page

The dilemma of the choice between these two is inherently present in the nature of the two extremes i.e. either of the choices will make you fall at the opposing ends of the human emotional spectrum. It is interesting to note that the question of choosing between the two extremes is not a new one . Tracing this conundrum back to the sixteenth century takes us to the writings of Machiavelli.

His political philosophy in ‘The Prince’ acknowledges the best leaders to command both fear and love. Having said that, Machiavelli recognizes the opposite polarity of the two emotions and maintains that since it is difficult to combine both in one person, it is better to be feared as a leader than to be loved (Machiavelli, 2003, p.53).

Today, about five hundred years later, the Machiavellian concept of a feared leader is still quite rigorously followed by leaders in fields including business. The issue that crops up here is the overemphasis on soft emotions like love in almost every facet of life as opposed to the use of fear when it comes to leadership. If humans are managed better through fear, what is the place of emotions like love, empathy and compassion in organizational dynamics and leadership? Another aspect that relates to this leadership choice is the evolution of society over time and the effect of civilization on human behavior and style of management. For instance, has the change from autocratic to democratic societies and the change from vertical to horizontal style of management in organizations affected the mindset of people including the leaders and followers?

From what I have observed while assisting my father in politics and overseeing my family business in Pakistan is that people are more responsive to a leader who demonstrates strength as opposed to a leader who shows warmth. The first thing that came to my mind was that this reaction is probably due to the fact that Pakistan is a developing country evolving into a enlightened society. I justified the fear model with backwardness of the area and attributed it partly to cultural norms. But it was rather surprising to learn that this model is still practiced quite frequently in the developed world as well. Taking the example of Texas Tech’s coach, Bobby Knight, who is widely respected for his leadership, had adopted the same fear model.

His harshness dragged him into many controversies including the one where he allegedly choked a player in practice (Snook, 2008, p.18). It can be argued that some fields like organized sports, military or manufacturing industry require such strict leadership as maintaining the chain of command is of utmost importance. However, knowledge industry has no such restrictions but the same model has been applied there in various cases. I personally know a few successful business owners in the US who rely on a rigid, strength based model to get the best out of their employees.

On the flipside there are leaders who rely on trust and warmth to extract similar efficiency from their teams. Contrasting Bobby Knight’s example with Mike Kerzyzewski (Coach K) of Duke, we see that both of them commanded respect and following but their coaching approaches were pole apart. Coach K’s leadership style was based on open communication and compassion as opposed to Bobby Knight’s fierce approach (Snook, 2008, p.18). Similarly, India’s reverent leader, Mahatma Gandhi is another example of commanding respect and following through love and warmth. Furthermore, there’s the story of the General who went way beyond the call of duty to personally know all of the officers training under him (Cohen, 2008, p.149).

The General’s gesture was one of pure warmth. This could be seen as an argument in favor of applicability of the love model in any organization regardless of its function and dynamics. Lastly, I would refer to the discussion in class where it was established that interpersonal skills that come from emotional intelligence and emotional quotient are much important for managers than technical skills that use academic intelligence and intelligence quotient. Based on the arguments so far, it would be safe to say that leadership can have much more to do with warmth and empathy than it is accredited for. And that the love model, like the fear model cuts across culture, fields and time.

There is ample evidence to support both of the models of leadership under various circumstances. What determines the effectiveness of leaders is their ability to get an emotional response from followers. The response can be of fear or of love. According to Gittell, Ledeen and Maccomby (2004, p.15), what matters is the decision making. If the decisions taken by the leader are fair, people will respond to both warmth and strength. But If the decision making is arbitrary, people will cease to respond to either emotion.

However, experts differ in their opinions about whether fear is more long lasting or love. Some feel that fear is more reliable as it has dread and punishment associated with it (Gittell, Ledeen and Maccomby, 2004, p.17). While others believe that love and trust overpowers all other emotions (Cuddy, Kohut and Neffinger, 2013, p. 56). Since these are opinions and we have seen both the approaches work in an equally efficient manner, there is no way to choose one or the other. So, it boils down to a matter of preference for me. Psychologists might have further insight into how the human mind works and receives certain stimuli to generate a response. It might make it easier to choose one emotion but for the matter of this paper I found something else that might help me reach a conclusion. So, I’ll focus on that.

Toegel and Barsoux (2012, p.75) believe that leadership is personalized and that each leader has to figure out his strengths and adopt a method that suits him/her best. Psychology divides the human personality into five different categories. Toegel and Barsoux (2012) talk about managing your inherent psychological tendencies and align them with one leadership style. If I apply it to the fear or love model under discussion, it would mean that it is better for the leader with an agreeable personality to try and instill love among followers and an extrovert to maybe use the fear model.

However, this should be done carefully. The agreeable leader needs to make sure that he is not too considerate. This can be done by slightly altering the inherent ‘need to be liked’. The leader should learn to concentrate on fairness rather than likeability (Toegel and Barsoux, 2012, p.88). Similarly, the leader with an extrovert personality should make sure that he/she is not too assertive or aggressive when taking up the fear model (Toegel and Barsoux, 2012, p.81). Small adjustments can take care of this issue as well.

In addition to aligning the leadership style with their personality, leaders need to make sure that they analyze each situation independently. I would take the liberty of loosely applying Peter Drucker’s advice about strategy to the choice between instilling love or fear among employees. Drucker’s idea is not to base strategy on a fixed formula, but to adapt it according to the situation (Cohen, 2008, p.203). Leaders should also think of the best way a one leadership style would be beneficial for them in one position at a certain firm and another for a different position in a different firm. For some people this might apply from project to project. But I tend to think of it as a medium-term plan. I say this because I feel that leadership style should not be as fluid as your temper. Otherwise, there is no point in taking up one style or the other.

In the final analysis about adopting a stance of strength or warmth as a leader, I have reached the conclusion that neither of the two approaches is inherently more effective than the other. There is evidence of effectiveness of both methods over time, regardless of cultural or geographical boundaries. The outcome of a particular approach would largely vary from leader to leader and partly from situation to situation. However, certain measures like fairness need to be ensured no matter what approach is taken. The answer to why a seemingly positive (warm) approach does not elicit a greater response as compared to a negative (fear-inducing) approach probably lies either in the individuality of humans and the collective diversity in the personalities of different followers or in the mental makeup of humans.

To be loved or feared as a leader. (2016, Apr 26). Retrieved from https://studymoose.com/to-be-loved-or-feared-as-a-leader-essay 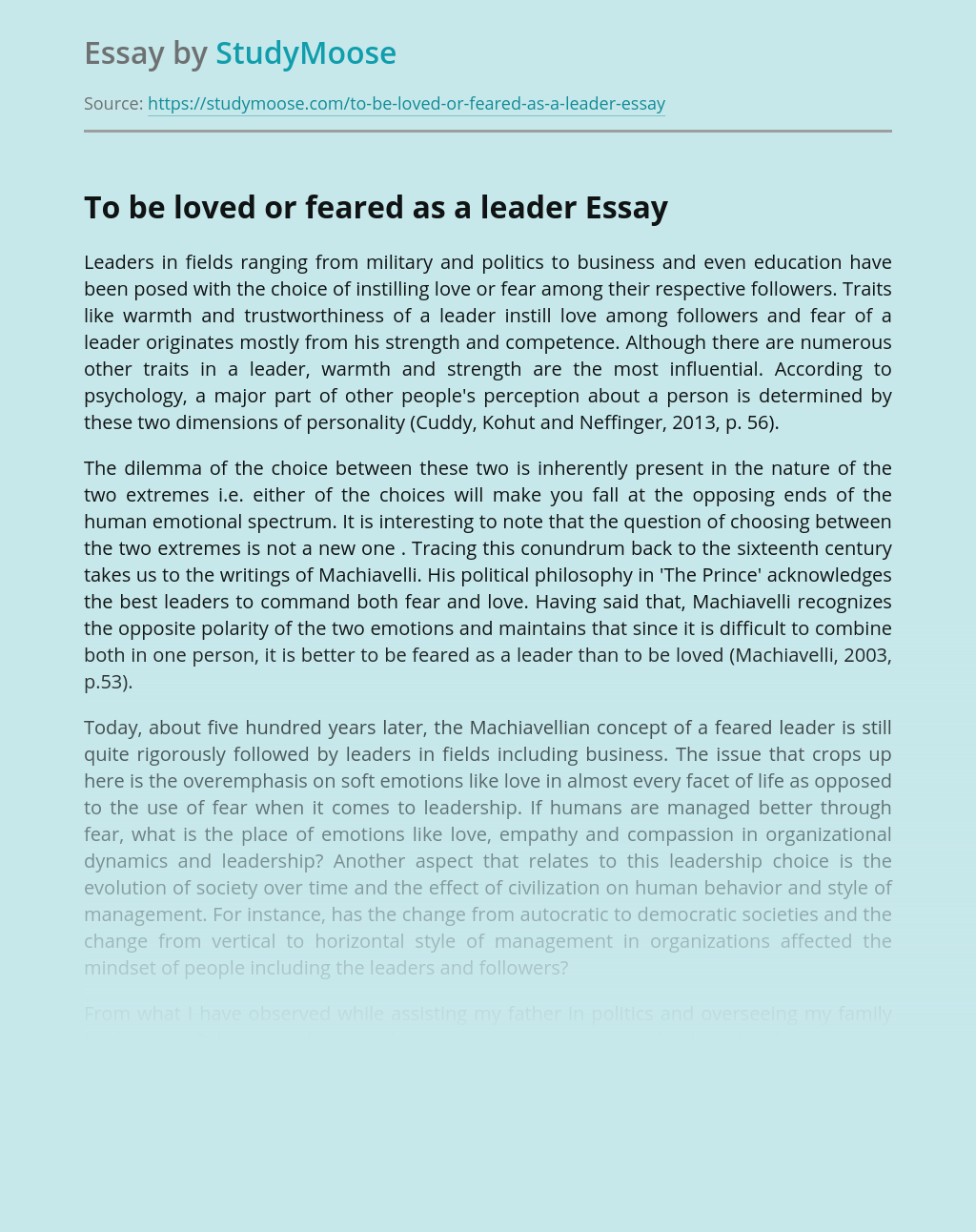 Poetry Analysis: "Batter My Heart, Three-Personed God, For You"

John Donne’s “Batter My Heart, Three-Personed God, For You” is an Italian sonnet written in iambic pentameter. The poem is about a man who is desperately pleading with his God to change him. He feels imprisoned by his own sinful nature and describes himself as betrothed to the “Enemy” of God, namely Satan. The speaker...

Despite an individual’s desire to belong to a group or community, this is not always possible. More than anything else, belonging is about finding a sense of place in the world. Belonging Matilda has a sense of belonging when with her school peers/friends and when she is with Miss Honey. When at the school and...

Depression is a psychological condition that changes how you think, feel, and it also affects your social behavior and sense of physical wellness. I can make you feel low self esteem and can cause self-depreciation. Depression is not feeling sad occasionally, it is a constant feeling of sadness that stays with you. If not treated...

Everyone has his characters to lead him to success. In other words, characters such as cheerful are unique and these are the factors to make them achieving their goal. In my case, I am stubborn to do anything, including my study even playing basketball. In my secondary school life, my teacher told me that I...

Communication can be hard when people speak different languages or use sign language, and it can become frustrating when you don’t understand what a person is saying. Barriers can occur when people find it hard to pass on or receive information because of impairment such as being death or bind which is quite common impairments....