Writings Involvement with Self and Society

The self is expressed in a multitude of ways ranging from speeches to television as well as writing. Not only that but as human beings it is instinctual to make an observation and write it down, but we tend to add our own personal view as to what we believe, or interpret something entirely else from the observation. By reading Karen Ho’s “Biographies of Hegemony” and Jean Twenge’s “An Army of One: Me” essays as well as Robert Thurman’s “Wisdom” it is evident that each employed a distinctive argument and method to explain their views on what they wrote but what each of them shared in common was how their writing allowed their “self” to share their opinions and views so as to bring society together; also the reason as to why they chose writing as their medium is because unlike television and radio there is no other voice but the readers that is left to make a decision and judgment based on the writing.

Turn in your highest-quality paper
Get a qualified writer to help you with
“ Writings Involvement with Self and Society ”
Get high-quality paper
NEW! AI matching with writer

It is the readers “self” voice that Karen Ho uses in “Biographies of Hegemony” to her advantage when discussing how finance and education now interconnect in ways that many never knew before: some of America’s elite and prestigious establishments such as Harvard and Princeton have such a close connection to Wall Street and its firms.

When Karen Ho discusses in her essay about a “culture of smartness”; this smartness being “central to understanding Wall Street’s financial agency, how investment bankers are personally and institutionally empowered to enact their worldviews, export their practices” (Ho 167), Ho is attempting to bring society and herself together in this essay to show that the people who run our economy are people “selves” who believes they are the cream of the crop or the “smartest”.

Even Robert Hopkins, vice president of mergers and acquisitions at Lehman Brothers, exclaims that the people they hire are “about the smartest people in the world…the best, the greatest, and the brightest minds in the World” (Ho 167). The “self” that runs these people and their beliefs were not well known to society until now. Their entitlement and self worth is not in them it is constantly told to them and so they believe it when in actuality these people who run our countries finances may not be the “smartest”.

In addition to revealing to people what the true “self” of others was, Jean Twenge explains in “An Army of One: Me” that the “self” is changing with generation after another specifically in the twentieth century. Twenge argues that over the second half of the twentieth century, American’s have become more about individual celebration rather than the being worried about other. This new change in individualism had a direct correlation how the “self” is now viewed, “[f]or the Boomers, who grew up in the 1950s and 1960s, self-focus was a new concept, individualism an uncharted territory… which is why many Boomers talk about the “self” using language full of abstraction, introspection, and “growth””(Twenge 488).

Twenge is trying to bring together the idea of “self” and society by a means of sharing this change that has undergone over generations. By Twenge talking about the expectations of our generation she is trying to make it evident that with increasing perfection we put higher stress on ourselves. When we do that we sometimes fail but because we believe we should follow our dreams it is believed we are entitled to that and if something stops us we blame it on others.

Twenge’s essay tries to tell how the “self” of our selves has “led to a darker side where others are blamed” (Twenge 497), this splits us up so Twenge is attempting to bring the “self” of our generation to come together with society to end this blaming. Twenge uses her ideas as to why the “self” and the “matter-of-fact self-focus of Generation Me”(Twenge 490) in her writing as a tactical move on her part to explore the reasons and opinions of society to see if they can agree with the change that she has viewed and studied and if change should occur.

This also falls directing in line with how society views these areas of opinion and reason because it all depends on the readers own views and their “self”. In Robert Thurman’s “Wisdom” he states the “Buddha did not find one way to interpret things”(Thurman 448), so the self can interpret things like language and how society uses this language. Thurman’s essay on the understanding of the “self” is a way for Thurman to reach society and help them understand that the “self” is not something that you just find but you must look for it by not worrying about oneself instead caring for others. By carrying for others we are able to find our “self” and while we are finding our “self” it brings us closer to forming a society that comes together. He states “You see other caught in the suffering of the terminal self-habit and you feel real compassion. You feel so much better, so highly relieved, that your only concern is helping those constricted other people”(Thurman 444).

A common similarity that each essay used was their ideas that were expressed through writing. Dating back to pre-historic time’s writings varied from pictures on cave walls to animal hides. All forms of media are controlled and regulated whether it is from television in which rich elite executives and produces instill their own ideas into the segments or radio talk shows that are also monitored by many eyes and filled with ideals that others believe in. Writing is between the editors the writer and the reader. Writing uses language with in turn links society; we have developed language to express ourselves clearly and by doing so we can better connect our “self” with society.

Throughout all three essays we saw each author discuss important topics that each wrote about. Whether it was to convince us of important issues or to make the general public away they all shared one common ground and that was writing. With writings ability to spread and simply require ink and paper it is clear that whatever these authors wanted to say they wanted the masses to read it; to agree or disagree with it. The use of television is useful but undergoes many changes because it must pass through a series of eyes where as writing is only between the writer and publisher and so when the author tells their story it is their “self” telling the story and waiting on society to answer back.

Writings Involvement with Self and Society. (2016, Aug 15). Retrieved from https://studymoose.com/writings-involvement-with-self-and-society-essay 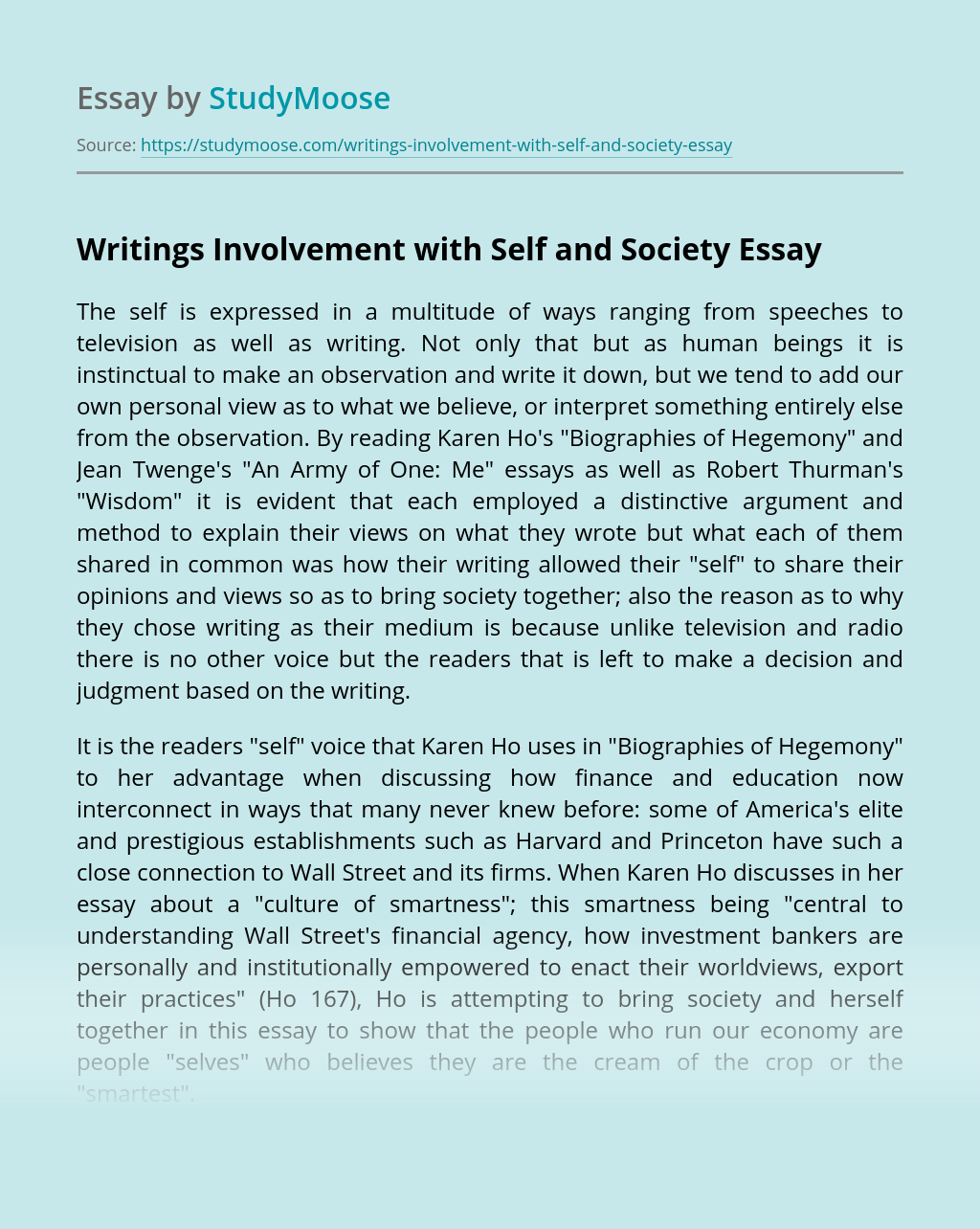 Turn in your highest-quality paper
Get a qualified writer to help you with
“ Writings Involvement with Self and Society ”
Get high-quality paper
Helping students since 2015
Stay Safe, Stay Original