* All men are born equal, naked, without bonds. God did not create man to be a slave; nor did he endow him with intelligence to have him hoodwinked, or adorn him with reason to have him deceived by others.

* This saying of Dr. Jose Rizal wants to tell us that all people in this world are equal, we are not born to be a slave. We need to show to others that if they are smart, we are also smart, and what are the things they can do we can do it also.

Don't use plagiarized sources. Get your custom essay on
“ Rizal’s Life Work’s and Writings ”
Get custom paper
NEW! smart matching with writer

Filipinos are not born to deceived by other country, we need to show them that we can stand on our own.

* He who does not know how to look back at where he came from will never get to his destination.

– Those who don’t learn from the past, or be thankful for the people who helped you in the past, will not succeed. You will not be what you are now without the help of people from your past, thank them and don’t use your pride, even if they did bad things to you at least it helps you to succeed.

* The youth is the hope of our future.

* Rizal’s vision of the youth was a genius call of foresight. Its underlying thought encourages the youth to take action, accept challenges, and take responsibility. Since the youth have seen the mistakes of the past they are expected not to repeat them.

* He who does not love his own language is worse than an animal and smelly fish.

* A Filipino who does not love his own language will be treated like a smelly fish that gross to approach, they are just pretend that there are foreigner to look rich or intelligent but you still need to love your own language to show respect to your country.

This month marks the 150th birthday of the country’s National Hero, Dr. Jose Rizal. In line with this, the country is embarking on a massive celebration to remember Calamba, Laguna’s beloved son.

Rizal was born June 19, 1861 to a well-to-do family. He was highly educated, completing his medical education in Spain and Germany; a prolific writer; a respected doctor; and a known linguist, able to speak about 20 languages fluently. Undoubtedly, he was an intelligent man who used his talents and resources to fight for his country. He did not stay silent in the face of adversity.

He became most famous for his two literary masterpieces – Noli Me Tangere and El Filibusterismo. These works were social commentaries against Spanish oppression and colonialism. However, he advocated peaceful means of reform. Instead of picking up a sword, bayonet or gun, he picked up his pen and set it to paper, inflaming the hearts of people and inspiring many others to start the Philippine Revolution.

* In this article it shows that Rizal downplayed over the years. Most people only know of Dr. Rizal as the writer of two Filipino literary pieces that are studied in high school. There are even urban legends that claim he is the father of Adolf Hitler. He appears on the humble one peso coin. Hundreds gather at Rizal Park, even if not to remember our national hero, then to spend a leisurely Sunday afternoon. Rizal criticized the way the Spaniards ruled the Philippines. If he were alive today, it is certain that he would write about the corruption and inefficiency in government.

He would write about the oppression of poverty. He would comment on the dominance of the Church and its influence on how Filipinos live their daily lives. We may not be under Spanish rule anymore, but the country is still being run by the same 150 political families over the last six decades. Filipinos are still being oppressed by debilitating poverty. The country’s resources are being raped. While we declare ourselves to be a democracy, there is no authentic freedom from the bondage of poverty, illiteracy, corruption and the manipulation of the masses.

Where in the world was Jose Rizal?
By Maricar Cinco
Philippine Daily Inquirer

SAN PEDRO, Laguna—It’s “Rizal’s world.” The Laguna provincial government is coming out with a new version of educational maps that feature the life and works of national hero Dr. Jose Rizal. Rizal’s World is basically a world map that highlights the 13 countries, including the Philippines, that Rizal had set his foot on from 1882 to 1887. Provincial Board Member Neil Nocon, who chairs the board’s committee on education, tourism, history, arts and culture which initiated the project, said the maps were intended to provoke a “global perspective” among Filipinos. In June, Nocon’s office came out with a map of Laguna featuring the towns associated with Rizal at some point in history.

“With this one, we want to inspire students or Filipinos studying, working or traveling abroad to be like Rizal, and use all those learning and ideas you learned abroad to help improve your own country,” the official said. The maps teach students not only world geography—as Rizal’s route is traced from the Philippines to Italy, Spain, France, Germany, Vietnam, Sri Lanka, Singapore, Egypt, Yemen, Austria, Czech Republic and Switzerland—but also history as accounts of the hero’s activities in a particular time and city are retold.

– Nocon believed the maps would be an effective teaching aid for students to easily “digest” history. He said it would appeal to the many overseas Filipino workers to know that their national hero was once where they are right now. “(The map) also humanizes Rizal, that in his course of initiating reform, he too was an ordinary man like us,” he said. Another tells about Rizal playing chess with boat passengers as they were en route to Spain from Manila on May 6, 1882.

“Maybe this can inspire students that they can also excel in sports other than basketball or boxing,” Nocon said. The provincial government printed out 10,000 copies of the glossy and vibrant maps (2.5 by 3.5 meter) that were launched during the Rizal Day commemoration on Dec. 30 last year before they were handed over to the Department of Education for distribution to public elementary and high schools in Laguna. Nocon said a second version of Rizal’s World would feature the hero’s life abroad from 1888 to 1892.

Would Rizal write another sequel to ‘Noli me Tangere’?
By Ricci F. Barrios
Philippine Daily Inquirer

If Dr. Jose P. RIZAL could have watched “Noli Me Tangere, the Opera,” what would he have thought of this new incarnation, produced by Dulaang UP, of his novel that planted the seeds of a revolution? Probably, like any author (and he was not just any author), he would have been delighted to have his work given a new form, provided it remained true to the original, and reintroduced to a whole new generation of Filipinos. Published in 1887, “Noli Me Tangere” brought to the consciousness of the Filipino that he should not be a slave in his own country and should reclaim his birthright. It had been 125 years since the Noli was first published. Generations of Filipino students have read the novel and watched it transformed into a movie, a historical narrative, a ballet, a stage musical and an opera.

Having studied Rizal’s works in high school and college, students have become familiar with the characters and plot of the Noli (and its sequel, “El Filibusterismo”). But did they understand the nuances of language in this new production? Did they connect with the rhythm of the music, the lyrics of the songs? Did they get a better appreciation of the story, its symbols and meaning? Did they understand that the story remains true today, as Filipinos struggle to search for their soul and identity? Although some of the dialogues and lyrics were dated and difficult to understand, the youthful audience was familiar with Maria Clara’s song “Kay Tamis ng Buhay” (Sa Sariling Bayan). Many appeared to be jolted by Sisa’s highly charged scenes and moved to tears and spontaneous applause when Crispin (child actor Matthew Anenias) sang to his dead mother.

– Some young people fiddled with their mobile phones, probably sending text messages or gaming even during climatic sequences. They were impervious to verbal reprimands. It is probably only a matter of time the youth completely misses the significance of the Indio’s struggle in Rizal’s time, of how the Filipino identity was forged through a revolution. Perhaps, instead of requiring students to watch, educators can find ways to involve the young in the Noli’s story and to motivate them to invest time and effort to read and watch because they truly want to learn about their history, not just to fulfill a class assignment.

One hundred and fifteen years after Jose Rizal was executed by the Spanish colonial regime, controversy still rages as to whether he was a reformist or a revolutionary. Rizal is immensely influential to generations of Filipinos. How he is viewed can help define the course of our history. In his Rizal Day Lecture on Dec. 30, 1969, titled “Veneration Without Understanding,” the historian Renato Constantino noted it was American Governor General William Howard Taft who in 1901 suggested to the Philippine Commission the naming of a national hero for Filipinos. Subsequently, the US-sponsored commission passed Act No. 346 which set the anniversary of Rizal’s death as a “day of observance.” Constantino cites Theodore Friend in his book, “Between Two Empires,” as saying that Taft “with other American colonial officials and some conservative Filipinos chose him (Rizal) a model hero over other contestants—Aguinaldo too militant, Bonifacio too radical, Mabini unregenerate.”

– It is eminently proper that Rizal should have become the acknowledged national hero of the Philippine people. Rizal never advocated independence, nor did he advocate armed resistance to the government. He urged reform from within by publicity, by public education, and appeal to the public conscience.” But in truth it was the Filipinos and not the Americans who first chose Rizal as their national hero. It was revolutionary President Emilio Aguinaldo of the First Philippine Republic—not Taft and the Second Philippine Commission—who first designated Rizal as a national hero. 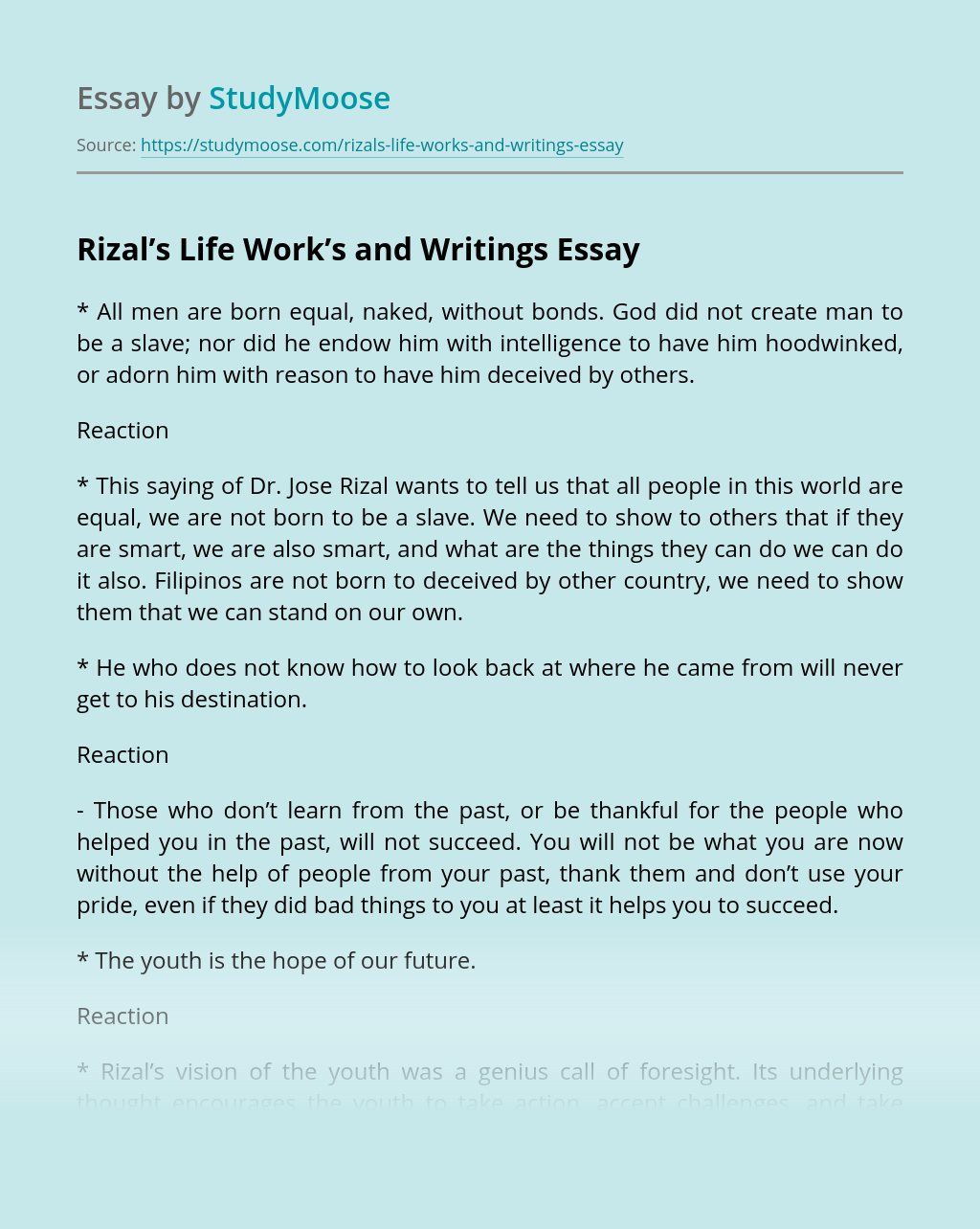