Don't use plagiarized sources.
Get Your Custom Essay on World War II: The Road to War Just from $13,9/Page

To answer many people’s questions as to why World War II pulled in many countries because those countries were unable to handle their many diplomatic issues such as the countries’ aggression appeasement and collective security. In 1939 the world quickly went from a time of peace and growth, and dove into what is now known as World War II. During what many people thought was a time of peace, there was actually many disputes and fights between countries.

This tension started to build until eventually, World War II began. An example of this tension was in Ethiopia.

Haile Selassie asked the League of Nations for help from the invasion from Italy; after his request was rejected he told them “God and history will remember your judgment… It is us today. It will be you tomorrow” (document 2) in this he is saying that while the League of Nations will not help because they are not involved, the war will come to them soon enough. Another event that greatly affected the upcoming of World War II was the holocaust. Many innocent people were being murdered in Germany, and since other countries were not involved or affected by it, they simply did not care. In document 1 it talks about how Hitler believed that Germany would not become a part of the world again until they were “led back to the bosom of a common Reich” saying that Germany had to become a country with one dominant, superior race. If other countries would have stepped in to stop this “perfect race” from beginning, then Hitler would have had less control over his people and soldiers and would not have been able to be so powerful.

The war would also have lasted a lot longer if many countries did not stick to every agreement of their aggression-appeasement treaties. Under the ideas of appeasement, many countries would not intervene in a war unless they were under a direct threat (one of the reasons the US did not join until much later) because it would reduce the amount of bloodshed. Instead, they simply negotiated with a country and gave them things to keep peace, like a weak kid might give a bully his lunch money to avoid getting picked on. The country reviving the benefits would simply get what they want because the smaller, weaker country did not want go to war and sacrifice innocent lives with the larger one. It is in this way that Adolf Hitler was able to grow in size. He took over small countries such as Czechoslovakia. In document 6, Winston Churchill talks about how he wanted France and Britain to stop Hitler from taking over small surrounding countries. He was right in saying that by doing this, France and Britain would have been preventing the war, because Hitler’s army was not strong enough to take a country if it was being supported by France or Britain.

This would have drastically changed the war because Hitler would have had to send in his army (which would be weak since he would have very little territory) and go to war with the countries that were being supported by larger countries. He would have then lost the war, and would not have been able to take control by simply bullying the small defenseless countries. World War II would also have been avoided if many countries did not participate in collective security. With collective security, if one country three countries were working together (like in an alliance) if one country was attacked, the two others would support that country and go to war with is attacker. If many countries would not have gotten involved in this idea and would have kept to themselves, then there would be less bloodshed. When the Nazis attempted to take over one county, they wouldn’t have had help from its allies (Japan and Italy) and would have had to work on their own. This would have made it harder for Hitler to conquer one country. On the other hand, if more countries had formed collective security alliances, they would have been able to unite sooner and stop Hitler and the Nazis.

An example is in document 8, it states that “other countries could have intervened by armed force in 1933 to overthrow Hitler when he had come to power” this is saying that if many countries had worked together in the beginning when Hitler first took power (and took over Czechoslovakia) they would have been able to stop him from gaining power. It is clear that many things could have been done by other countries to stop Hitler on his rise to power. World War II spread too many countries because countries were unable to handle their many diplomatic issues such as the countries’ aggression appeasement and collective security. Many things could have been done if countries would have worked together to stop Hitler when he first rose to power. Because of appeasement, many countries simply gave in without a fight, fights which could have weakened Hitler and forced his army to crumble. If many countries had not had their collective security allies, there would have been a harder time for small countries to take over larger countries. It would have also been harder for smaller countries to lost land if they were attacked by a larger country, which is why smaller countries should have all united to keep each other safe. If there is one thing that can people can learn from World War II, it is that if everyone works together in the beginning in order to maintain peace, even in small countries like Czechoslovakia, then world peace can be achieved, at least for a little while. 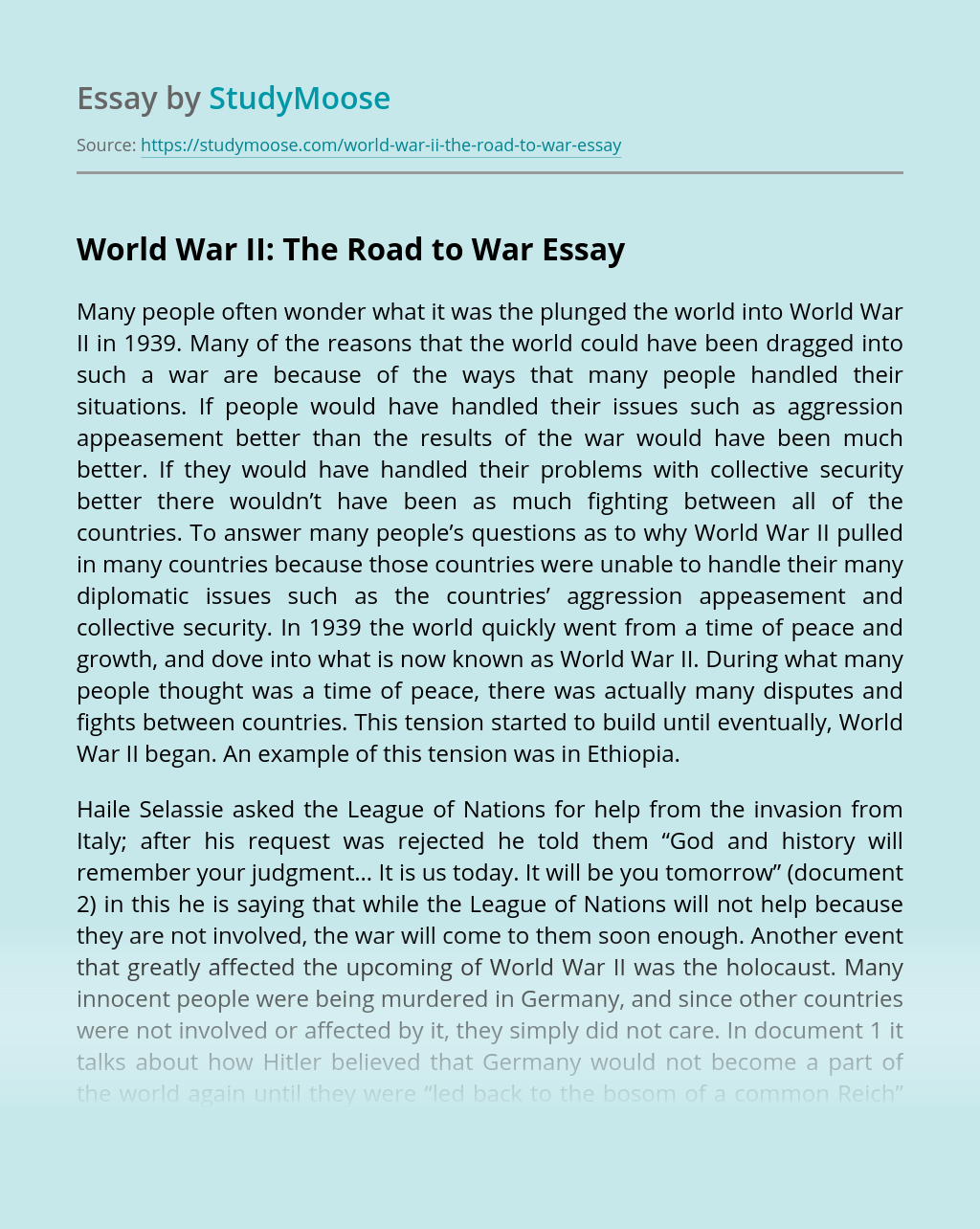 There are many controversies about self-control when we are talking about boosting our willpower. Is it true: the more self-control you have, the stronger willpower I have to achieve my goal? Actually, for me, I did believe that statement before reading the book “The Willpower Instinct”, by Kelly McGonigal. I thought, in order to balance...

War Is a Force That Gives Us Meaning

The book “War Is a Force That Gives Us Meaning” by Chris Hedges provides in-depth discussion of the appeal and pull of war on national actions and attitude of people towards the war. The author highlights fifteen years of experience and reports through his own prism the very nature of the war, its causes and...

Get Essay
Self Awareness and Interpersonal Skills

The following assignment is highlighting the importance of self-awareness and interpersonal skills within the early child care setting. The rights of the child within the ECCE. How to communicate effectively with children their families and other colleagues and how this benefits all involved. How being part of a team within the ECCE benefits and what...

The Wars- Importance of the four elements of life

Throughout the presence of guy in the world, the four components of earth, air, fire and water have been important to man’s presence and have been the driving force in sustaining the life and insuring the survival of mankind. These four elements are 4 basic building blocks that enable man to not only function and...

In the essay “America’s Unjust Drug War” by Michael Huemer, Huemer goes over the realities and opinions around the topic on whether the leisure use of drugs should be banned by law. Huemer believes that the American federal government needs to not prohibit the use of drugs. He raises the point on drugs and how...