These days there are a lot of women working outside the house, which can affect many people positively or negatively. The Australian feminist Germaine Greer said in one of her interviews, “Most women still need a room of their own, and the only way to find it may be outside their own homes.” The working mother can affect the family in positive way, where her children learn how to be independent, help in raising the income, and she can make her personal identity.

Don't use plagiarized sources.
Get Your Custom Essay on Women’s working outside Just from $13,9/Page

People who are against the mothers to work claim that when both the mother and the father working all day outside the house, they cannot stay with their children enough time, which can affect negatively on their children and they may act with their parents as strangers.

There are a lot of working mothers taking care of their children and they are very close to them, it depend on how the mother can manage her time. Also what’s important in parenthood is the quality not the quantity, it’s not about how much time you spend with them, but it’s about how you raise them even if you spend just two hours with them.

Those who disagree also say that the Childcare is expensive, so most of the money that the working mother will earn will be spend on the infant schools. Actually, these days most of the women keep their children at their mother’s house, so they don’t spend money on the childcare. Also the nurseries now are everywhere and they became cheap, maximum it will cost 1000 riyal. So if the mother was earning 4000 riyal, 3000 will be left and that can make different. Because the economic today affect a lot of people, and in many situations the family can’t depend on the husband salary alone because it is not enough to cover all the expenses of the household, so the women had to work to have an extra income. Their third excuse is that the working mother will have two jobs instead of one.

The first job will be the one she has at the office, and the other job will be when she goes back home, because at her spare time she has to look after the house and her children, which is tiring for her. To a certain extent they are right, but a working mother had a self confidence more then the woman who is working inside the house, also she will had her own personal identity, she will be known by her name unlike the woman who is working in her house; for example the woman who is working in her house will be known as “Mohammad’s wife” or “ Abdullah’s mother”. There are a lot of arguments on this subject, it has nothing to do with cultures, but every family has their own situations and their own mentality, so what may be acceptable and good to some families they are not to other families. At the end I think the last decision should be to the mother, because she is the one who know if she can handle it or not. If it’s come to me I encourage women to work, because in that way they learn their children how to be independent, they help in raising the income, and also they can build thier own identity. 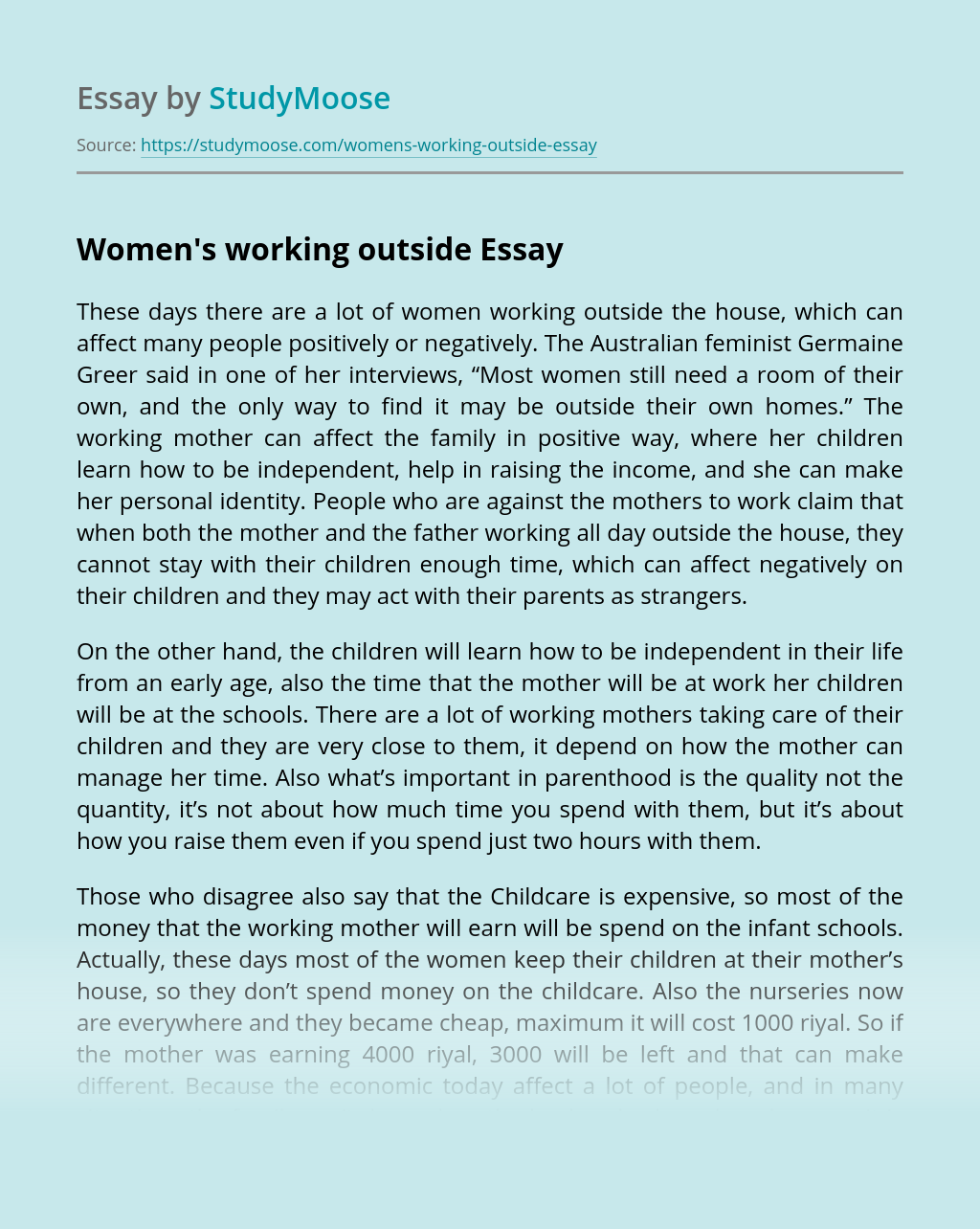 Describe How the Setting Can Value and Celebrate Individuality

Describe how the setting can value and celebrate individuality The Nursery shows respectful awareness of all the major events in the lives of the children and families in the nursery, and in our society as a whole and welcome the diversity of backgrounds from which they come. In order to achieve this, the nursery aims... VIEW ESSAY

View sample
Get Essay
Apple Inc. and the Macro Environment

Economic Environment: More or less, every economic factor has an effect on the operations of Apple Inc. These may include; current economic situation (boom, recession, etc.), credit terms, inflation or deflation, strictness of interest rates, unemployment levels, stability of exchange rates, stock exchange trend, etc. Apple’s business can be affected by all these factors either... VIEW ESSAY

View sample
How women are presented in "The Great Gatsby"

F. Scott Fitzgerald said of The Great Gatsby that it ‘contains no important woman character’. How are women presented in The Great Gatsby, and how can this be compared with the presentation of women in Cormac McCarthy’s No Country for Old Men? Initially, it appears that the women characters are seen as inferior and are... VIEW ESSAY

CSR which stands for corporate social responsibility which is also known as corporate citizenship, corporate conscience and responsible business. 2.Different organisations have framed different definitions – but in a nutshell CSR is about how companies manage the business processes to produce an overall positive impact on society. It is like giving back to the society.... VIEW ESSAY