July 19, 1848, seemed like one of the hottest days from that year. But do you think the sun’s cruel heat would stop all the horse-drawn carriages from arriving at Wesleyan Chapel in Seneca Falls New York? No, I think not. In total, there were about four hundred people that arrived in town that day. They were there to attend and watch one of the turning points in American history, the first public conference to deal with the rights of women to be held in the United States.

Don't use plagiarized sources. Get your custom essay on
“ Women’s Suffrage Movement ”
Get custom paper
NEW! smart matching with writer

Eventually, this meeting led to the Women’s Suffrage Movement. This movement was the struggle for the right of women to vote and run for office. There were other things that women fought for during this movement, however, these were the overall objectives. Many important women such as Elizabeth Cady Stanton and Lucretia Mott contributed greatly to this movement, and without them, the outcome might not have been the same. The Women’s Suffrage Movement was a remarkable event in the history of women which consisted of heated debates and arguments, which contributed greatly to the rights of women today, and will continue to do so in the future.

Many authors have studied and written on the topic on the Women’s Suffrage Movement. The majority of these authors believe that this movement was not an easy one, and it took much sacrifice and hard work to achieve their success to earn their rights.

According to Fiona Macdonald, author of, You Wouldn’t Want to Be a Suffragist! Campaigning was tough and exhausting She also states, Others traveled across the United States, making speeches, holding meetings, and recruiting new supporters.

Another author, Deborah Kops, says that women participated in large reform movements and Peter Benoit, author of Women’s Right to Vote, states women had to fight against oppression, in order to secure the right to vote. Another idea stated by Peter Benoit is that women today contribute greatly to presidents winning elections.

Former President Barack Obama won the election in part by securing more than half of the votes cast by women It all started in 1776, when the founding fathers were writing the Declaration of Independence. Abigail Adams, wife of John Adams, wrote a letter to her husband to remember the ladies when writing the Declaration.

However, John Adams dismissed his wife’s request saying that women were unable to make up their minds on who to vote for and would simply vote for the candidates their husbands, fathers, or brothers, told them too. His idea implied the role of women during that time. Married women were expected to obey and answer their husbands, while unmarried women were supposed to do the same with their fathers. Any wages that a woman made when she worked, were required to be given to her husband. Giving the husband control over his wife’s legal rights was known as coverture.When the U.S Constitution was fully adopted in 1790, the responsibilities and workings of the new government were outlined. It also defined men and women as citizens.

However, it did not explain voting requirements. The details were left up to the individual states. Rules varied throughout all the states, however, some of these rules were that men who did not own property and enslaved people could not participate in the government. Many states denied women the right to vote because they felt like it would be giving each man an extra vote. New Jersey, in contrast, gave women who owned property and met residence requirements could vote. Sadly, this did not last very long. Several young men started taking advantage and dressed themselves up young women in order to cast a vote twice.

Eventually, the state legislature took these women’s voting rights away.In the 1830’s, things started picking up and changing. Men started traveling to jobs that were further away from home. In result of this, women started needing the authority to run the house hold while their husbands were away. Slowly, women started convincing state legislatures that their rights needed to be expanded. In 1839, the first Married Women’s Property Act was passed by the Mississippi legislature. This act gave women the right to control property and make contracts. Soon, women’s newfound activism took a further step then property rights. Issues like temperance and abolition were being taken in interest.

In 1840, an international antislavery conference was held. Elizabeth Cady Stanton and Lucretia Mott went along with their husbands, however, according to the conference’s organizers, the women were constitutionally unfit to participate. When William Lloyd Garrison found out about this, he was offended and spent the conference talking with Mott and Stanton. They started talking about the idea of a convention that could be held to organize and discuss a reform movement.The final date for this convention was scheduled for July 18-19, 1848 in Seneca Falls New York. A document called the Declaration of Sentiments was drafted. This document was like the Declaration of Independence, and it specified the women’s complaints.

On July 18, this Declaration was read and discussed. On July 19, 100 people signed the document. The reactions of the newspapers were mixed. Some said that men and women having equal participation in political rights was over the limit. Ministers started verbally attacking the Seneca Falls Conventions in sermons. Men who had signed this declaration got mocked without mercy.This was just the beginning of a long journey that was coming along the way. There was no turning back. A few years after the convention, the Anti-Slavery Society held a meeting in Boston. Suffragists that attended that meeting started planning for another convention that would be held on October 23 and 24, in Worcester, Massachusetts.

Nearly 1,000 people attended the convention. Many speakers talked about the concerns of suffragists such as equal access to jobs for women. One attendee, Lucy Stone, urged for changes in property laws. This convention drew a lot of attention and got lots of negative feedback from newspapers. Some said that suffragists wanted to abolish both the Bible and the Constitution. Others said that these suffragists were getting too much hope and wanted to elect Abby Kelley as president of United States. With all of this feedback from newspapers, the movement was only getting more attention and growing. Women from different states started holding their own conventions and started forming their own women’s rights groups.

The women’s suffrage drew attention from many abolitionists in the 1850’s. At the 1851 Ohio Women’s Convention, Sojourner Truth delivered a speech called Ain’t I a Woman? where issues of races and gender were discussed. Susan B. Anthony, Elizabeth Cady Stanton, Lucy Stone were women in this movement that worked hard and tirelessly, which led to the success that came out of this movement. They led petition drives and pressed for legislative hearings. Money form lectures and meetings were also collected to print out books. These publications helped spread far and wide the goals of suffragists. In April 1861, when the Civil War started, this movement started slowly fading away from the public’s eye.

Even during the war, women started taking out on multiple roles such as sewing and laundering uniforms. Some even volunteered in hospitals and raised money for medical supplies. Stanton and Anthony were encouraged by women’s expanding roles during the war.

A meeting of Loyal Women was held in 1863 to discuss women’s suffrage along with the abolition of slavery. The attendees of that meeting established a league called the Women’s Loyal National League to help push these issues forward. 400,000 signatures on a petition to end slavery were collected by the league. This helped Congress pass the 13th amendment, which forbids slavery in the United States. Soon the 14th and 15th amendments were passed. The 14th amendment addressed equal protection citizenship rights. The 15th amendment stated that voting rights were allowed for any race, but not gender. Lucy Stone, AERA (American Equal Rights Association) leader, supported and was with the ratification of the 15th amendment. However, Susan B. Anthony and Elizabeth C. Stanton were against and unhappy with the amendment.

The AWSA campaigned for state-by-state reform of voting laws. Lectures were sponsored, suffrage literature was distributed, and local and state societies were established. At the end of the year, women’s suffrage was granted in the Wyoming Territory. The following year, in 1870, Utah Territory followed. However, it was costly to push this movement through different state legislatures. As a result, the AWSA’S work was impeded. In the election of 1872, Susan B. Anthony went to cast her vote but was arrested. She argued that the 14th amendment had already granted women the right to vote. The amendment said that citizens were people who were born or naturalized in the United States. Anthony stated that the Constitution allowed citizens to vote. Her argument was disagreed in court by an all-male jury. Her punishment was a fine for $100, but she refused to pay.

Other women followed in her footsteps, but in 1875, the U.S Supreme Court reviewed the state ruling.Voting rights were not guaranteed to all citizens by the Constitution. The ruling left the suffragists with few options, they could either amend the Constitution or have state laws reform one. 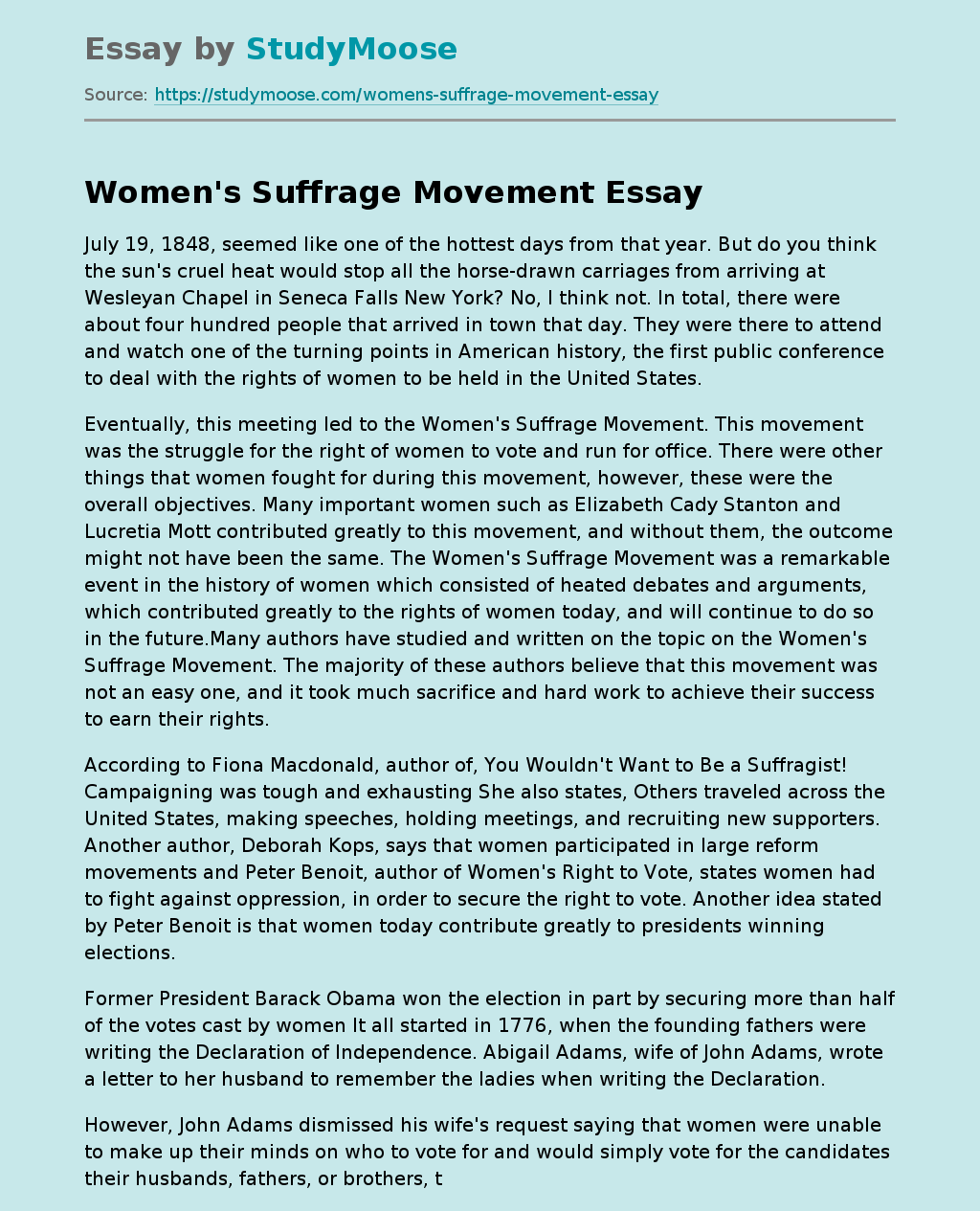