Alice Stokes Paul was born January 11th, 1885 in Mount Laurel, New Jersey. Alice was a suffragist and an activist who made a huge impact in women’s history. Alice attended Swarthmore College, and got her Ph.D. from the university of Pennsylvania. Alice then joined the National American Woman Suffrage Association. The Women’s Suffrage Movement basically started after the Seneca Falls Convention, which was a meeting, created for Lucretia Mott who was an orator, and that was where they realized that they had to do something so that women were given equal rights.

Don't use plagiarized sources. Get your custom essay on
“ Alice Paul and the Women’s Suffrage Movement ”
Get custom paper
NEW! smart matching with writer

After they passed the fifteenth amendment in which they gave black men the right to vote, Susan B. Anthony and Elizabeth Cady Stanton were not happy because women were not included. They started to try to get the women’s rights to vote state by state, but unfortunately were not able to. Alice Paul was a very smart woman who fought for women’s rights in America; she spent her entire lifetime fighting for what she believed was the right thing.

In 1916 Alice Paul and the other women she worked with created the National Woman’s Party (NWP). During the Presidential Election of 1916, the Silent Sentinels which was a group led by her to protest against the president and the senate to get them to approve the nineteenth amendment protested outside the white house and got arrested for obstructing traffic. During her stay in prison, they were all treated horribly and were sometimes avoided altogether. They started to strike because they were not being fed, but her efforts only proved worse because they translated her to the psychiatric ward in which they fed her raw eggs through feeding tubes through her mouth.

Once Alice was released from the jail, she knew something had to be done to finally get the government to pass the women’s right to vote. Alice Paul created much tension and chaos during this time, because of her continuous attempts and strikes toward the president and senators, the nineteenth amendment was finally passed.

According to Dulcie Straughan who wrote a book review of “Alice Paul and the American suffrage Campaign” states that, Alice Paul “created the first successful nonviolent campaign for social change in the United States.”(241) She also tells us that Paul was mostly guided by Gandhi’s “passive resistance ” to protest. His passive resistance method was basically saying that if the people acted in a violent way while protesting, it would create more problems rather than solve their problems. It is a very huge accomplishment for Alice Paul, and she isn’t given as much credit as she should be.

According to Jone Johnson Lewis, “Paul also was active in the Peace movement, stating at the outbreak of World War II that if women had helped to end World War I, the second war would not have been necessary.”(1) I completely believe that statement, I think that Alice Paul worked very hard to help women get equal rights and that if women would have been more involved, and were able to help during war world I, that the second war could have been avoided. Alice Paul also was working towards getting the Equal Rights Amendment (ERA) passed. The Amendment just states that men and women should be able to have the same rights and should be allowed to do the same things. The Amendment has still not been passed but some states have actually ratified the amendment in their constitution. She is also a part of the Women’s wall of fame, and two colleges have named buildings in her honor.

On July 9th, 1977, Alice Paul passed away at the age of 92. According to Dena Kleiman, Alice “ Until she suffered a stroke three years ago, Dr. Paul had continued to campaign for the equal rights amendment, which would guarantee equality to women.”(42) Alice Paul had previously suffered from a stroke that left her disabled. She was then living at the “Quaker Greenleaf Extension Home” which is located in Morristown, New Jersey. To Conclude, Alice Paul was a great woman who contributed many things to the United States, especially to women.

She was born in 1885 to Quaker parents and she studied at the University of Pennsylvania. She was a suffragist and activist who fought for women and helped pass the nineteenth amendment, which gave women the right to vote. She was a part of the National Woman Suffrage Association, and then she created the National Woman’s party, both dedicated to fight for Women’s rights. After many hardships, and several arrests later Alice Paul and the Sentinels were able to contribute to the passing of the 19th amendment. Alice was and always will be important in history, and she will always be remembered for her many contributions. 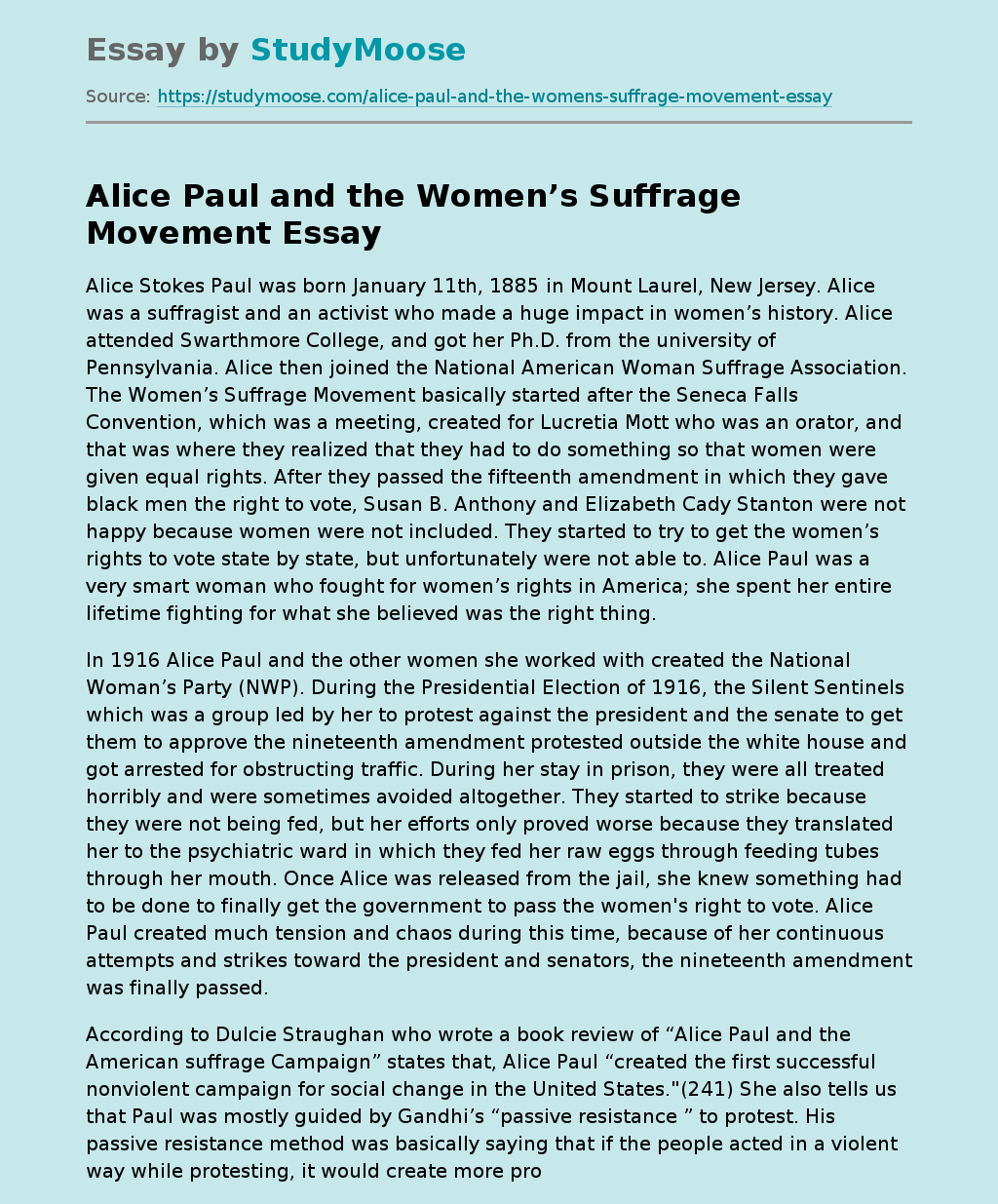