An important role of an individual

Every individual has the right to participate in the social and political affairs of his or her country as well as in international concerns. The active participation of an individual plays an important role especially in countries were democracy is the implemented form of government. The government is a political machinery that is responsible in consolidating the various and sometimes conflicting interests that the people have. The people are the one who gave the government the authority and the legitimacy to guide and even limit their affairs.

They were able to bestow the government officials the right to lead them through the consent that they gave in the form of suffrage. Suffrage or the right to vote is a very essential element in the political and even social participation of individuals. It is through the process of voting that they could be able to give their stand on which candidate they deem would greatly embody their rights and interests.

In relation to these, the right of women to vote is also recognized as a momentous event because this signifies their greater participation in society.

The importance of suffrage is best exemplified in the United States wherein women were given the right to vote through the help of Alice Paul. One of the very important moment in the life of women wherein they were given the right to vote was captured in a picture. This image shows a group of women who are intently and seriously looking at a banner that was being unfurled by a woman in a balcony.

This particular event took place in an old-styled house.

Even the picture itself looks like it was taken many years ago. This could be proven in the quality of the picture because it is still captured in black and white color and the clarity of the image is not as good as the pictures that are developed now. As such, it could be said that this image is a part of the United States history because it happened in the past but more so, it depicted an important event in the country. The picture was taken on August 26, 1920 at the National Woman’s Party Headquarters. Read about modern social media activism

Alice Paul, the woman in the balcony

It shows Alice Paul, the woman in the balcony, unfurling the ratification banner over the railing. Paul and the group of women that are captured in the image are celebrating the most one of the most important event for the National Woman’s Party as well as for American women. Since the party is advocating the women’s right to suffrage, they make it a point to sew one star in the banner for every state that would approved of this petition. During that particular day, the state of Tennessee already ratified the amendment.

As such, the final star was sewn on the banner and Alice Paul proudly unfurled it on the railings of the National Woman’s Party headquarters to signify this victorious event (Butler, 2002) Alice Paul traced her background from a family that has activism and reformation in their blood. Both sides of her parents have been a member of the Quakers, which work towards governmental reform. She said that she practically has no ancestor who was not a Quaker. Alice Paul was born on January 11, 1885, in Moorestown, New Jersey. William M.

Paul, her father, was the owner of a large farm at New Jersey and was a president of the Burlington Country Trust Company. The orientation of his father as a farmer and banker as well as the background of their family has greatly influence the way of thinking and actions of Alice Paul. Her family were Hicksites, which is characterized as having inner strength, a separate community, quietism, and calm as well as reserved outlook in life. Paul adherence to the Quaker faith also encourage her to become more inclined in serving others and having a serious life purpose.

Being the oldest of four children, Alice Paul was the one who was really affected by the activist lifestyle of her family especially since she has to be a role model for her other siblings. She was also heavily influenced by the women’s right tradition within Quakerism that believed in gender equality, education for women, and working for the betterment of society. Her mother also often brought Alice during her women’s suffrage meetings. Furthermore, she also have a very good educational background that made her acquainted with biology, social work, and the law.

Alice Paul’s family and educational background played a huge part in influencing and motivating her to become a feminist activist that fight for women’s right to suffrage (Adams and Keene, 2007). The success of the National Woman’s Party in the ratification of the right to women to suffrage did not come easy especially on the part of Alice Paul. Her desire to fight for women’s right has come a long way. During her stay in England, she met with the founder of the British suffrage movement who also advocated about taking the woman;s movement to the streets.

In line with this, Alice took part in more radical protests for woman suffrage such as: hunger strike and even being incarcerated for three prison terms. When she returned to the United States, she approached the National American Woman Suffrage Association (NAWSA). She joined forces with NAWSA in lobbying congressmen for constitutional amendment with regards to the right of women to suffrage. In connection to these, Alice also spearheaded the largest parade ever seen in the nation’s political capitol.

The parade was participated by college students, professionals, middle and working class women who all dressed in white with banners and floats to push for women’s right to suffrage. The parade was able to garner more publicity than what is expected. Due to this, the publicity paved the way for the Congressional Committee to lobby for congressmen and the president for this cause. However, then President Woodrow Wilson still remains adamant about the issue saying that it was still not the right time (Adams and Keene, 2007). Paul created the Congressional Union for Woman Suffrage (CUWS) that was supported by NAWSA.

Nevertheless, these two parties separated because of financial issues. Due to this, Paul established the Woman’s Party that prioritized women in westerns states who already voted towards the right to suffrage. Later on, the CUWS and the Woman’s Party merged into the National Woman’s Party (NWP). The formation of this new party also marked the transition in the operation of Paul’s protest. She forbid any more pleading for the advocacy they are fighting for and changed for a more militaristic campaign of “demanding” for the passage of the women’s right to vote amendment.

As such, their mode of protests started to become more radical than usual that opted for many women including Paul to be hurt and jailed. Hundreds of women were incarcerated and 33 of them were even convicted. They also have to go through forced feeding, rough handling, worm-infested food, and they were not allowed to contact the outside world (Lakewood Public Library, n. d. ). The brutality that these suffragists experienced were highlighted by the media, which angered many Americans and created more support.

The decisions and actions of these women could be regarded as rhetorical in nature because they were able to persuade other people to join their cause. It could be recognized as pathos because they were able to convince other people through the leadership of many credible personalities in this field like Alice Paul. Logos is also applied as a rhetoric function because it was able to enlightened the people of the logical explanation behind their advocacy. Moreover, ethos is also greatly applied because the experiences of these women were able to touch the heart of other Americans (Lakewood Public Library, n. d. ).

Redemption has come for the suffering of this women when they were freed due to the demand of the public that forced the government to act. In 1918 election the Congress were mostly composed of pro-suffrage members, which made it possible for the House to reaffirmed the vote for women suffrage (304-89). The senate also follow suit as on June 4, 1919 they passed the amendment by one vote. Utmost success was achieved by this women on August 26, 1920 when the last state, Tennessee, ratified the amendment. Women were able to vote for the first time during the 1920 presidential elections (Lakewood Public Library, n. . ). After achieving their goal of giving women the right to suffrage, Alice Paul continued fighting for women’s equal rights. She and other women work together in introducing the first Equal Rights Amendment throughout the United States. Paul also broadened the scope of her feminist activism when she also took part in international activities that opened the door for the establishment of the World Woman’s Party (WWP) (Lakewood Public Library, n. d. ). Alice Paul together with other women around the world who are fighting for the same cause still continues their activism for women’s equal rights. 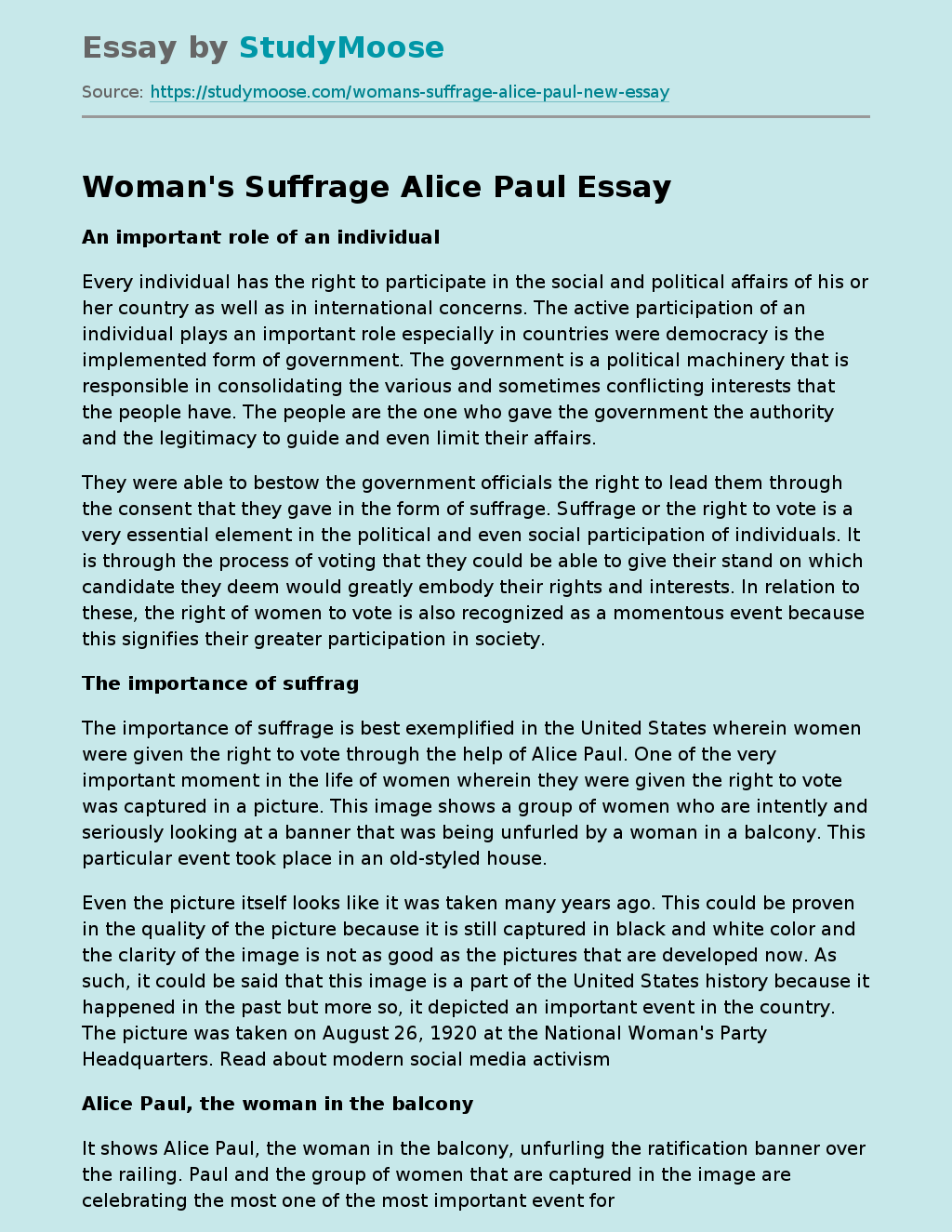