Discrimination against women is a persistent social problem even in the 21st century that negatively affects women in many life areas such as education, domestic life, social advancement but mostly in employment. The main reason for discrimination is the mentality that the entire society was raised with, which was mainly implemented in people’s minds as children. Once implemented in a person’s mind, this kind of mentality is very difficult to be changed. Taken the example of the women’s football team which has better performance than the men’s football team belonging to the same club, and yet the trainer of men’s team is paid far better than the trainer of women’s team it can be seen that this behavior at a workplace represents a discriminatory practice from both a legal point a view as well as a moral point of view.

Don't use plagiarized sources.
Get Your Custom Essay on Women Discrimination Just from $13,9/Page

First of all, from a legal point of view not only do women have the same rights as men do, but they also have the right to be fairly paid especially in a case that the woman manages to reach a higher performance than a co-worker.

The only thing that should be taken into consideration for financial reword in a workplace is the performance of a person, woman or men. It should not be considered the gender, raise, religion or anything else. According to the Institute for Women’s Policy Research, in 2009 full-time female workers only earned 77 cents for every dollar earned by men. The U.S. Department of Labor reports that although women account for an increasing percent of the workforce, they most commonly find employment in traditionally “female” fields, such as nursing, elementary school teaching and secretarial work. In a constantly changing society, people cannot expect to live after standards that were implemented centuries ago. Furthermore, as the example given above is considered gender discrimination it implicitly becomes an unethical, immoral practice. Although women currently face fewer social and economic barriers than they did in the past, discrimination remains a serious problem.

There are many reasons for which paying a female worker less than a male worker is considered a discriminatory practice from a moral point of view. Not only does gender discrimination at a work place affects women causing psychological harms in terms of lower self-worth, potential harassment and insecurity but it mainly affects the entire society which is not able to develop and reach its full potential as long as it discourages women to use their talents. This practice presented in the example above is also breaking the rule utilitarianism which implies that actions are moral when they conform to the rules that lead to the greatest good.

As long as people at their work place are financially reworded by their gender and not by their performance, it will lead the society down. Respecting the law and paying employees fairly according to their performance will encourage women to use their skills and help at the development of the workplace and implicitly the development of the society. At the end of the day the negative effects of discrimination against women at any workplace resonate across society and will negatively affect future generations, as children are raised in the context of unequal gender standards. 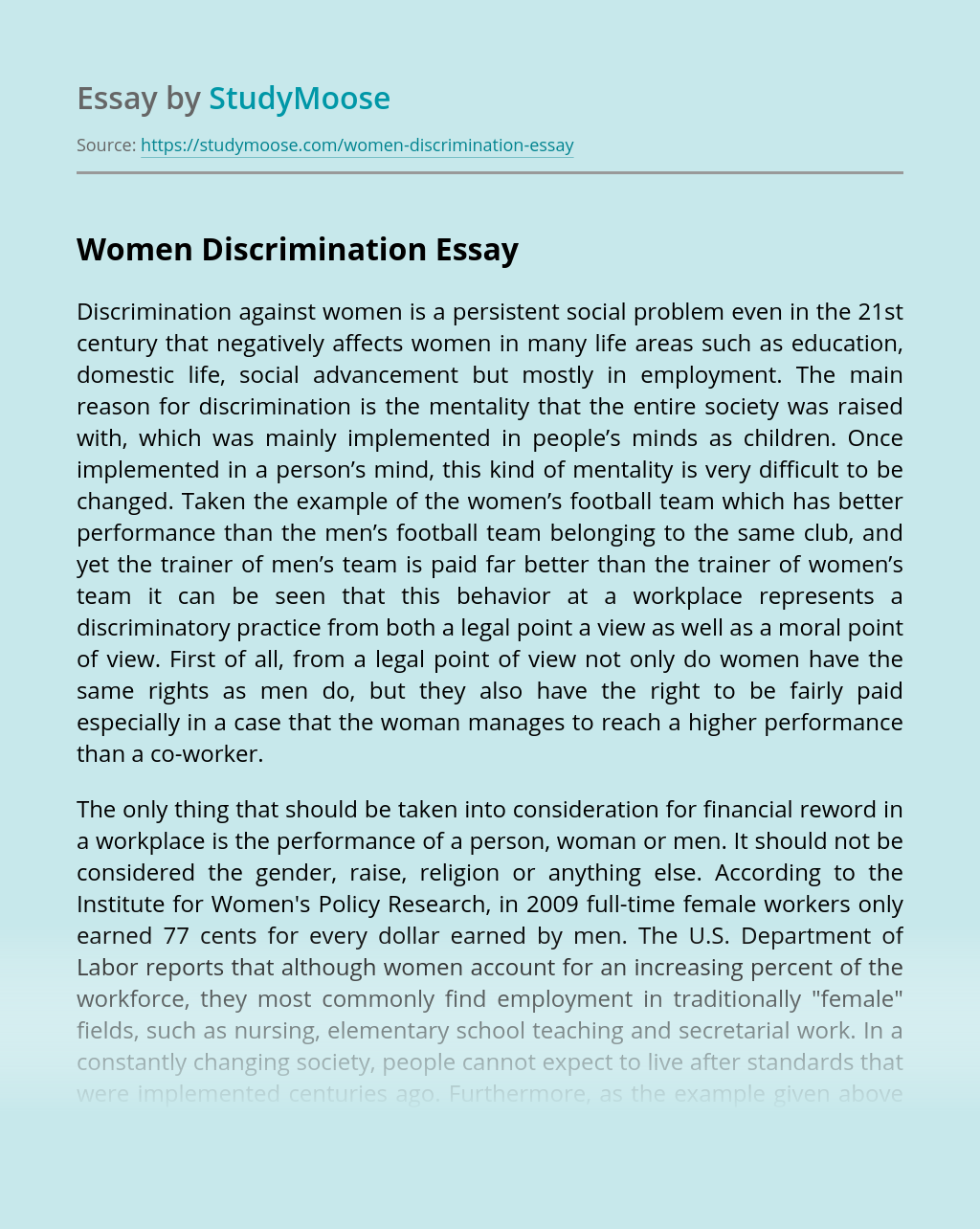 View sample
Get Essay
Homosexuality as a Deviance: Discrimination In Society

1. Introduction “I have nor color prejudicies nor caste prejudices.All I care to know is that a man is a human being and that is enough for me, he can’t be any worse.” Mark Twain Inequalities are a global challenge. They persist both within all countries and between them.Similar kinds of inequalities are faced in common by people across the world. Inequalities are not just problems for the people whose...

View sample
"Dawn is at Hand" by Kath Walker

In the poem ‘Dawn is at Hand’ by Kath Walker, the author attempts to change people’s thinking about aboriginal people. The poem talks about a better future for all aboriginal people and letting go of their past. The author uses many poetic devices such as theme, repetitions and metaphor to enhance her message and inspire...